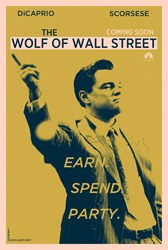 Martin Scorsese’s The Wolf of Wall Street and David O. Russell’s American Hustle both explore the people who thrive by living in the cracks of the American Dream.

The Wolf of Wall Street proves yet again that Scorsese can tell a story like few others. Wolf is three hours long, but never feels dull or sluggish. The story moves with a frantic, frenetic pace that mirrors the so-crazy-it-must-be-true life of Jordan Belfort the film chronicles.

Scorsese and DiCaprio – who gives one of the best performances of his career as Belfort – have both taken plenty of heat over the film’s portrayal of Belfort’s life. Many critics feel the presentation glamorizes Belfort, turns a criminal and a sleaze into a someone to idolize.

If we’re to believe Scorsese and DiCaprio, Wolf is meant to be an incisive critique of just how broken our system is.

That’s exactly what I walked away from Wolf feeling the weight of that critique. The depiction of Belfort isn’t idolatry, but prophetic warning. Or, maybe better put, it’s a showcase of idolatry as prophetic warning.

Wolf is lewd, crude and ugly. Belfort is arrogant, cruel and shameless. He does enough narcotics to kill an elephant. He has every luxury money can buy – from cars to a trophy wife to a giant yacht. It’s easy to envy Jordan Belfort. He has everything a person could want – everything but relationships.

Belfort leads a lonely existence – after he leaves the wife of his youth for trophy wife Naomi, he’s finally betrayed by his supposed best friend Donnie. The film concludes on a beleaguered Belfort reduced to motivational speaking in New Zealand. His recitation of the familiar sales patter he used to built his empire falls well-rehearsed from his lips, but he can’t hide the quiet despair in his eyes.

Jordan Belfort gained the world, and all it cost him was his soul. The real tragedy is that he can’t see it.

This is the danger of idolatry, the consequence of a life devoted solely to wealth. Belfort doesn’t start out a cruel, vicious man. He starts out chasing the American Dream just like anyone else – he wants to be rich. He wants to provide a good life for his wife.

But his pursuit of wealth quickly corrupts him. He becomes addicted to the power wealth grants him. Within no time, he’s caught up in the game of acquiring more – more wealth, more status, more power.

Within no time, he’s actively breaking laws to help his company compete with old Wall Street firms. He flaunts all manner of authority and rules because he believes himself to be above them all. And apparently he’s right – Belfort spends three easy years in a white collar, minimum security prison, then lands back on his feet. In his own words, Belfort boasts,

I was nervous about prision… then I remembered I’m rich.

This is the ugly truth of the American Dream: our system has cracks in it, cracks that can be exploited by anyone brash enough. America really is a place where anyone can get rich, but that’s not necessarily good. The Wolf of Wall Street promises us that anyone can have it all, just like Jordan Belfort.

The question we’re left asking as the film wears on is whether we want everything Belfort has.

All it will cost you is everything: your love, your dignity, your humanity. There wasn’t a single moment in the film I envied Belfort. He’s a disgusting, despicable character. Did Scorsese glamorize his life? Maybe so – but he did it in such a way that I never want to follow in Belfort’s footsteps. That’s a prophetic warning about the dangers of wealth anyone should be able to get behind.

YOUR TURN: Did you like The Wolf of Wall Street? Do you think it glamorizes Wall Street unnecessarily?