I love Hawaiian myths and legends. Here’s a beautiful one about the naupaka flower, which has only half a bloom.

In ancient times, there was a woman of royal blood named Naupaka. She was beautiful and kind, and most beloved by all who knew her. Though she had many friends and a large and loving family, she was deeply saddened, for she had fallen in love with a common boy named Kuai who lived down at the village below.

She could not marry him, for he was a commoner and she royalty.

Naupaka did not know what to do, so she went to see a kupuna who was well known for her aloha, pono, and deep spiritual insight. 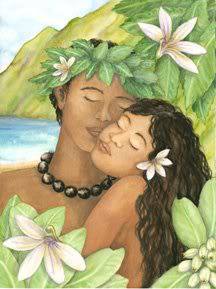 d to their story, and after some thought told Naupaka and Kuai that they must journey to a far off holy place, and there seek the wisdom of a priest. Although the law was clear and they could not marry, it was also clear how deeply they loved one another.

So the two lovers set off together, over mountains and through forests until they came at last to the holy place. They explained their story to the priest, and he shook his head. He could not help them, he said. They must pray and get permission from the gods themselves.

As they prayed, a dark storm arrived and lashed the island with lightning and rain. This, they knew, was the answer of the gods. A princess could not marry a common man. Heartbroken, Naupaka took the white flower from her hair and tore it in half. She gave the other half to Kuai and said, “You must return to the seashore and live in your village. I will remain and live a lonely life in the mountains.”

Even the flowers mourned to see the young lovers hearts broken so badly. As a memorial to their love, when the naupaka flower blooms, it only blooms in halves. Every flower is a reminder that when lovers cannot be together, the whole world mourns with them.