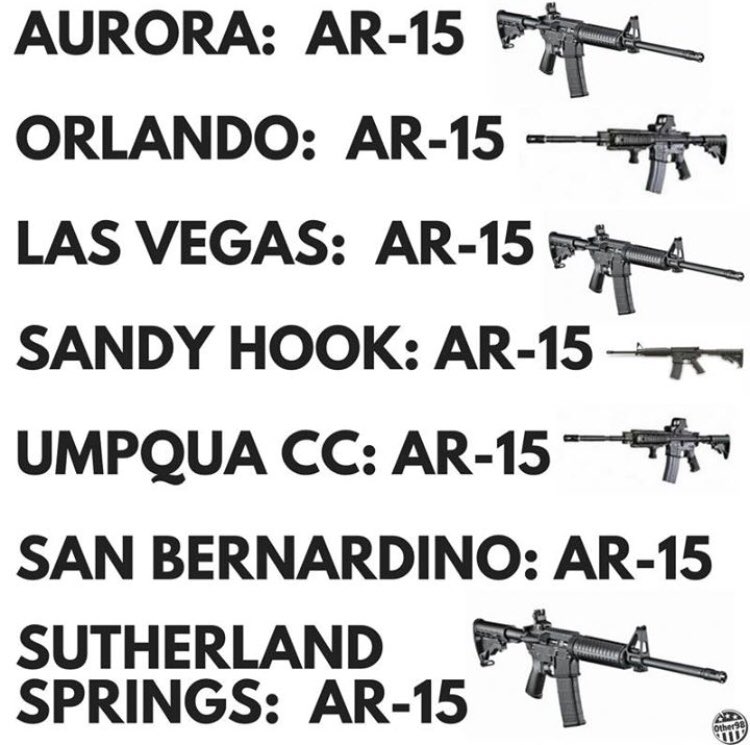 You may have seen this meme going around since the tragic shooting in Sutherland Springs this weekend. It’s not completely accurate, because the shooter in Orlando used a different (though similar) weapon, and it leaves out some other shootings with the same weapon.

Let’s stick with the facts, though. Here are some:

2012 — Sandy Hook elementary school shooting. Shooter used an AR-15. There were 27 dead (20 children, 6 school staff and the shooter’s mother) and one wounded.

2015 — Umpqua Community College. Shooter used an AR-15. There were 9 people killed and 9 wounded.

2017 — Sutherland Springs church shooting. Shooter used an AR-15. There were 26 killed and at least 20 wounded.

That’s 188 dead and 646 wounded. (Shooter deaths are not included in the numbers above.)

Why do so many killers choose to use this specific weapon? Here’s some context for that. It basically boils down to, because they can kill the most people using this gun. Of course there have been several terrible events using handguns in the last several years, including the Charleston shooting and the Virginia Tech shooting.

Over 1,500 mass shootings have taken place since the Sandy Hook shooting.

According to the CDC statistics:

2016 numbers are not in yet, but the CDC says it will increase again.

“It is my second amendment right to own a firearm.”

No one has suggested otherwise. No one is trying to get rid of all the guns in the U.S.

See above. It appears they do.

Some of the guns used in mass shootings were illegally attained.

If we made semi-automatic rifles illegal, there would still be mass shootings.

True. But fewer of them would be with semi-automatics which would presumably lower the death toll.

How will I fight the government without semi-automatic rifles?

Do you own tanks, jets, or nuclear submarines?

Stricter gun control is not the answer.

Okay. What is the answer? Here are some solutions that seem to be working from Canada, Japan, Australia and the UK to help with the brainstorming.

P.S. It’s easy to lose sight of the victims in these conversations. For all those who have lost a loved one to gun violence of any kind, my condolences. I am sorry for your loss.