The Ocean at the End of the Lane is master-storyteller Neil Gaiman’s new book for adults. It’s short (less than 200 pages) and straightforward: a man just past middle aged returns to his childhood home to attend a funeral. He wanders his old streets and awakens memories long forgotten.

I’m not going to talk about the plot here, because it’s amazing and fun and I don’t want to give anything away. Just go read it.

As our narrator relives some of the darkest moments of his childhood, the story becomes a meditation on the nature of growing up. Anyone who has kids (or who can remember the magical bits of your own childhood) will recognize the boy who finds The Ocean at the End of the Lane.

His world is dangerous: inhabited by monsters and wonders and oblivious, unhelpful adults. If you’ll permit me a short tangent, this is the quality of Neil’s writing I love most (probably. They’re hard to rank). In Neil’s books, kids are in real danger.

To a kid, the world is a scary place, and too often we adults don’t take their beliefs and fears seriously enough. 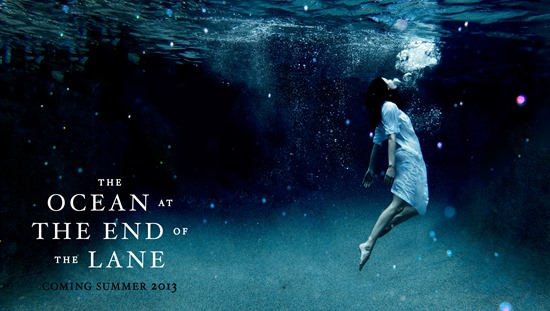 Neil takes us back into that world, where everything is magical and that’s not necessarily a good thing. A child’s world brims with possibility and – because of the perceived danger – real stakes. Ocean at the End of the Lane somehow manages to paint a picture of this fantastic children’s world without condescending to us.

Neil’s story invites us into the person of the narrator in more ways than one. We feel like visitors to this world. It’s clearly well-crafted, wholly thought-out and beautiful. But the setting never supersedes the story. We’re left with a lot of questions, an ache to return to the Ocean at the End of the Lane. We hunger for more of this world that keeps slipping through our fingers, not because the world is unformed, but because it’s not our world. We don’t live there; we’re only visiting for a little while.

The story summons up all the wonder and isolation of childhood while at the same time touching on home and friendship and sibling rivalry and sacrifice and so much more. But these never overtake the pure wonder of the story itself.

Ocean at the End of the Lane is a love song and lament for the innocence of childhood.

Too often we lose the sense of wonder and awe that permeates the life of a child. To read a story like this both thrills and haunts us, as we recognize the children we were, the world we lived in, and acknowledge that we’ve lost it.

As he always does, Neil gives us a story that reminds us there’s always more to the world than meets the eye. We need more stories like this to call us back to the magical, wonder-filled world we left behind when we grew up.

Bottom Line: Ocean at the End of the Lane recaptures the wonder of childhood without patronizing us. It’s short, sweet and magical.

YOUR TURN: Are you a fan of Neil Gaiman? What did you think of Ocean at the End of the Lane?