This week Clay and JButt put aside her petty differences in the spirit of the season to recall those magical morns of Christmas past, and a couple of the toys that defined two generations. They even got each other a special digital gift. Feel free to open before Christmas.

Clay: Well Jessie, tis the season of Christmas cheer and holiday delight, a time of goodwill and hope for all mankind, when we celebrate the possibility of peace on earth and even right here in our oft-contentious column.

JButt: ABSOLUTELY. Hey, remember when you DIDN’T get me a birthday present this year? I’m just saying.

Clay: Hey! What about me? MY birthday was just the other day, ya know.

JButt: Yeah, but I thought Christians agreed a long time ago the only birthday that counts in December is Jesus’. Should have aimed a little earlier, fetus Clay.

Clay: Wait, we’re not going to argue, remember? Let’s focus on what every kid knows is the TRUE reason for Christmas.

Clay: C’mon Jessie, that’s just wrong. The correct answer is, of course, toys*. I’m wondering what some of your favorite toys were when you were a little, um, littler person.

JButt: Oh. Right**. But first let me tell you what my parents did when we were little. On St. Nick’s Day, they’d fill our shoes with candy and then they’d stick twigs in there with it (the St. Nick’s Day equivalent of coal). CLAY. MY PARENTS BASICALLY GAVE ME COAL FOR REAL.

Clay: Were the twigs supposed to mean you were bad? I mean, you got the candy too, right?

JButt: I think they just didn’t want us to get too cocky.

But back to toys. One of my more memorable Christmases was when we (there were four of us) each got our own Ninja Turtle. And then there was the gigantic stereo with multiple speakers that could play six different CDs and you could program your own playlist from those 6 CDs (you’d just have to wait for the disc to change between songs). And then books. Oh, man, the books. And the most life-changing one would have to be the Hello Kitty pencil box my brother got me that had like, twenty different compartments that popped out with a press of a button. It REVOLUTIONIZED my sixth grade year.

Clay: Good ones. I think I’ve had a few more birthdays than you, so my Christmas toy memories harken back to an earlier time known as the 1980s when HE-MAN. I had Castle Grayskull AND Skeletor’s Castle and how awesome is it that Skeletor is now a pitch man for Honda!

JButt: Those commercials are amazing. This is what happens when our generation grows up and is in charge of making things.

I want to talk about how I had a She-Ra doll and I melted her hair over a candle flame (accidentally? as a science experiment? or maybe my sister did it? I can’t remember the traumatic details). But that makes me also sound old so…what are we talking about again?

Clay: I didn’t think you were old enough to know who She-ra was. I guess setting her hair on fire proves you weren’t old enough for that kind of responsibility.

JButt: OR MAYBE COULD IT BE that I am the TRUE princess of power. And I CANNOT believe I forgot to mention my three-story Barbie dream house with the working elevator. I AM SHAMED.

Clay: Oh, you wanna talk elevators? I had the Ghostbusters Firehouse complete with fire pole, action figures, and ectoplasm which was basically play slime that got on everything and got me in trouble.

JButt: I don’t even know how Christmas Present Day can even compete with Days of Christmas Past. Unless you got me a puppy for Christmas. OMG DID YOU GET ME A PUPPY??

JButt: Depends on what you got me.

Clay: You have my sincere appreciation. It’s true about Christmas past. We never had money but somehow I would discover what seemed like a mountain of wrapped toys with my name on it come Christmas morning. Then video games came along and OMG NINTENDO TECMO BOWL changed my life.

JButt: Oh, I hear you. Also, Santa came to our house like, three weeks early, and his handwriting looked a lot like my mom’s. I don’t think my parents had the energy to keep up the jig after four kids spanning a solid decade at various ages.

Clay: Were you a present peeker? I bet you were.

JButt: NO DOUBT. It’s all in the tape job. And if you put it in a gift bag, you’re basically BEGGING to be found out.

Anyway, here’s a little something for Christmas/your birthday (don’t you December babies love when we do that?): 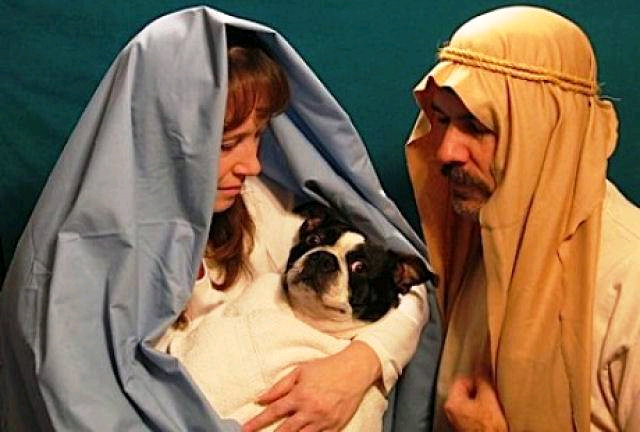 Clay: Aw, that was sweet. I thought Joseph was being played by Walter White from Breaking Bad for a second there.

All I got you was this realistic Jason Bourne action figure complete with Matt Damon’s eyes and daring-do expression. 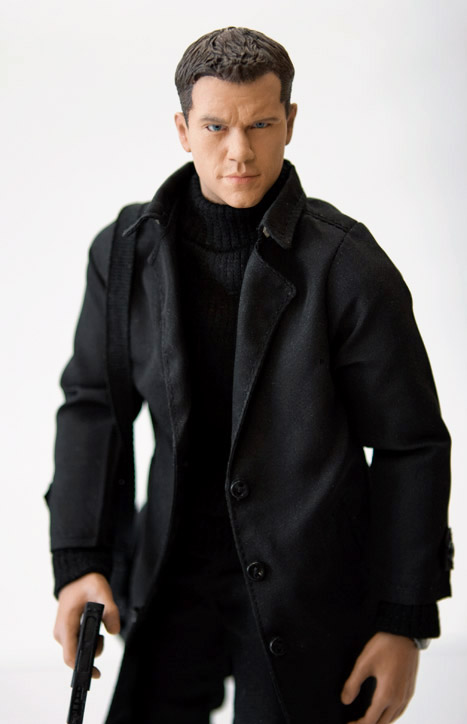 Clay: I would say something judge-y about that but A) it’s Christmas and B) you might counter with a Kate Beckinsale Underworld action figure.

JButt:Yeah, and we don’t want things to get TOO weird.

Clay: Well, we better wrap this up. GET IT?

JButt: That was a good attempt. SEE HOW GENEROUS I’M BEING BECAUSE IT’S CHRISTMAS? I won’t even point out how lame that was.

Clay: So lame you can call me Tiny Tim.

JButt: GOD BLESS US, EVERYONE.

*GUYS. WE KNOW JESUS IS THE REASON FOR THE SEASON.