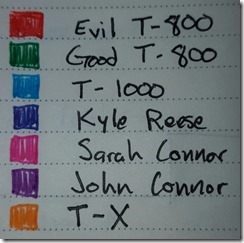 Time travel stories can be pretty confusing. Despite how tight Looper was, many audiences found it hard to follow. And Primer requires multiple viewings and charts to begin to make sense of.

The TERMINATOR time travel mythology isn’t always coherent, but I’m going to do my best to make sense out of everything.

The original TERMINATOR is pretty straight-forward. Just before humanity – led by John Connor – finally wins the war with the machines, Skynet sends a Terminator (Model T-800, or “the Arnold”) back in time to kill John’s mother, Sarah. John sends back Kyle Reese, one of his most trusted soldiers. Unbeknownst to everyone except John, Kyle is his father.

Kyle and Sarah manage to get pregnant and kill the T-800. Before he dies, Kyle tells Sarah that Judgment Day will happen on August 29, 1997. Sarah lives off the grid, preparing for the coming war with the machines.

Though it was released in 1991, Terminator 2 is set in 1995, when John Connor is 10 years old. He lives in foster care because Sarah has been institutionalized. Everyone, including John, thinks she’s insane because of her obsession with the coming machine war.

That all changes when a new Terminator attacks. This T-1000 is made of liquid metal – clearly more advanced than the T-800 from the first film. John and Sarah are saved by another T-800, this one programmed by the future John Connor to protect his mother and past self.

The Connors learn that Skynet’s creation is a direct result of the events of TERMINATOR – a Cyberdyne scientist named Miles Bennett Dyson uses the recovered arm and CPU of the T-800 killed by Kyle and Sarah to create Skynet. The Connors convince Dyson to destroy Cyberdyne’s advancements. After Sarah and the new T-800 destroy the T-1000, the T-800 allows Sarah to destroy it so that no  future technology still exists in 1995.

TERMINATOR 2 ends with a pretty tight time-loop. Why did Skynet send a T-800 back to 1984 instead of a T-1000? Apparently it wanted the T-800 to be destroyed, to ensure its own creation. (Or, more probably, if it killed Sarah Connor it could then deliver itself to Cyberdyne). As a backup plan, it sends a more advanced T-1000 to when John is a child.

It also appears that the Connors have stopped Judgment Day – only 2 years before Skynet will come online, they completely destroy all future tech in 1995 and the scientist most responsible for Skynet is dead.

Terminator 3: Rise of the Machines and Terminator 4: Salvation

TERMINATOR 3: Rise of the Machines is set in 2004, and we learn that Judgment Day has in fact been stopped. Sarah Connor is dead (cancer) and John Connor continues to live off the grid. Yet another new Terminator, the T-X is sent back to kill as many of future Connor’s lieutenants as possible, and stumbles across John in the process. He is saved by another reprogrammed T-800. John learns that he’s killed in 2032 by this T-800 (chosen because of his emotional attachment to the one from T:2), and that Kate sent it back to save them from the T-X.

John, the T-800 and his future wife, Kate Brewster, head to stop Skynet (which is now a government missile control system and apparently unrelated to Cyberdyne) from coming online. Kate’s father (who’s in charge of Skynet) tricks them into hiding in a military bunker while Judgment Day happens.

Here’s what matters for TERMINATOR: GENISYS:

As for TERMINATOR: Salvation, nothing in this film directly impacts the previous timelines.

The entire film is set in 2018, in the middle of the Machine War. The creators of the film claim it’s set in the original timeline, but it really doesn’t matter too much.

That’s what you need to know going into TERMINATOR: GENISYS. We’ll (try to) make sense of the time travel mechanics of GENISYS in the next post.