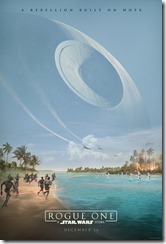 Star Wars: Rogue One is the second film produced by the Disney juggernaut. It’s also the first Star Wars film ever that’s not a Saga film. In other words, it’s not about the Skywalker family. These non-saga films are called “Star Wars Stories” and they will be released in the off-year from the saga films. Han Solo and Yoda prequels and a Boba Fett film have all been teased.

Rogue One is a prequel to Episode IV, A New Hope. Remember how at the beginning of Episode IV, Princess Leia smuggled away plans for the Death Star by sending R2D2 to find Obi Wan Kenobi? And remember how the Death Star had this silly little exhaust port that could blow the whole thing up?

Rogue One is the story of how the Rebels got those plans.

Spoiler free stuff: the film is good. It’s not great, but it’s good. The characters are interesting and relatively well-developed (though it certainly helps if you’re familiar with the larger Star Wars universe. Of course, let’s not kid ourselves… who is going to see this as their first Star Wars film?). The humor is great – as funny as any of the other films. The plot isn’t any more McGuffan-driven than any other Star Wars film. The score is good – composer Michael Giacchino pays homage to Williams’ legendary score without feeling like a cheap imitation. And there’s loads of fan-service – whether it’s too much probably depends on how much of a fan you are.

Bottom line: if you like Star Wars, you’ll like this film, though I’d be pretty surprised if it cracks your top 3.

Now let’s spoil some stuff, shall we?

Thematically, the movie is sort of a mess. It’s supposed to be about bad guys – Jyn is rescued from prison and Cassian almost murders somebody once. Though they try hard to make us feel bad for these bad guys, Rogue One falls into the same trap as Suicide Squad: they spend so much time making us love all these rogues, they have to tell us how bad they are.

The film is also very short on character motivation – literally a whole squad of rogues show up and say, “We all did bad stuff. Maybe this one good thing can redeem us.” Rogue One was clearly going for a darker, more ambiguous tone, but we’ve had four movies of “Empire Bad. Rebels Good.” Plus the Empire just built the Death Star in this film. Even though the characters don’t know how powerful it is, we all saw Ben Kenobie collapse when millions of voices suddenly cried out in terror and were suddenly silenced. If you’re going to convince us that assassinating a weapons designer is bad or that blowing up the weapon he built is bad, you have to work a lot harder.

Rogue One really wanted its theme to be hope. We know this because they said the word approximately 17,000 times in the movie.

Any time there’s a great objection to a questionable decision – like “Why should the rebellion put all its eggs in one basket when said basket is the word of a woman who is the daughter of the chief imperial weapons designer, especially when we literally just met her 10 minutes ago?” (or other objections raised in the film) – some main character basically shouts, “BECAUSE HOPE!” as loudly as they can, everyone cheers, and then they move to the next plot point.

All that was missing was for someone to say, “Galactic Peace… that’s an old hope… an old hope that has died.” That way another character could look at the camera and say, “It’s time for A NEW HOPE!”

Other random thoughts that didn’t fit into the review:

YOUR TURN: What did you think of Rogue One?