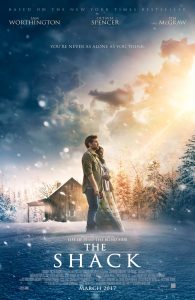 You might remember an earlier time, when we were all more innocent and bright-eyed, until a self-published novel about the Trinity fell from the sky and exploded all over the Evangelical Christian blogosphere. I’m speaking, of course, of The Shack by William Paul Young. For a good three months, hardly a link could be clicked that someone wasn’t criticizing the book for being heresy (and almost half the critics had actually read the book!).

That time has come and gone, but thanks to the forthcoming film adaptation of the novel, the controversy has arisen from its grave. Like George A. Romero’s best (read: most disgusting) creations, these heresy hunters are back, their arguments decidedly worse for the wear. So it’s time to put these foolish objections in the ground one more time and hope we don’t get splattered too much in the process.

If you never read The Shack, it’s a novel about Mac, a man who’s asking a question as old as faith itself: if God is loving, then why do bad things happen? In the midst of his grief, Mac goes to a cabin in the woods, and rather than encountering deadites, he encounters the Trinity. Each person of the Trinity has assumed a form with whom Mac can interact – the Father, “Papa”, is a matronly black woman. Jesus is a thirty-something Arab man and the Holy Spirit is a vaguely Asian female. The whole book is a series of theological reflections couched as conversations between Mac and the Trinity. It’s a lot of fun. The writing is not particularly good, but there are some fun and provocative ideas in here.

Second, what is heresy? In the Church, heresy is contrasted with orthodoxy, which means to think rightly about God. So heresy is thinking wrongly about God. In Christianity, orthodoxy is bound by the creeds of the Church councils – most often the Apostles’ and Nicene. Because The Shack deals with the Trinity, you’d think the critics would go to the creeds, but that’s not the case at all. That should be a giant red flag. Orthodoxy discussions that aren’t grounded in the creeds are – at best – personal attacks thinly veiled as spiritual opposition.

With that in place, there are two major reasons (as far as I can tell) people are calling The Shack heresy.

It’s sort of a running joke among pastors that if you don’t want to preach heresy, just never talk about the Trinity. This is a complex, difficult doctrine that took the brightest minds in the Church more than three hundred years to work out (and they were much closer to the historical Jesus than we are!). The same can be said of writing fiction about the Trinity.

But we pastors do preach about the Trinity and fiction writers do write about the Trinity and there’s a big difference between a sermon and a novel. The Shack is a work of imagination that seeks to explore God’s relationship to the world. Young did not write an academic treatise on the nature of the Trinity. If he had, we’d be in heresy territory.

Creative, fictive representations of the Trinity are not automatically heresy, as critics are now claiming.

By far the most bizarre critique I’ve seen floating around the internet is brand new since the release of the film. As best I can tell, it was released into the wild by neo-Calvinist blogger Tim Challies and then repeated ad nauseam ad absurdum by his apparently innumerable minions. That critique is that, because the film features humans playing God the Father and God the Spirit, it breaks the second commandment.

I was not aware Tim Challies had converted to Islam. Islam has strict prohibitions about representing God or the prophet Mohammad in art (which is why so much Muslim art is abstract). Christians have been representing God in art basically forever. Challies’ position is either inconsistent or unChristian.

This critique is genuinely baffling. Challies (and his drones) steadfastly assert that any human playing God is a violation of the commandment against making images of God. This is simple foolishness. If these critics were consistent, they would also complain about Morgan Freeman (Bruce Almighty), George Burns (Oh, God!) and the Monty Python boys. They would write hateful tirades against Michelangelo and the myriad other Renaissance artists who depicted God the Father.

If these critics were consistent in their iconoclastic tendencies, there would be a conversation worth having. As it is, they’re blatantly, unapologetically  inconsistent, which only reveals what they actually dislike about the book.

The bloggers doth protest too much. Their problem is that they don’t like the book’s depiction of God as a black female. They’re baptizing their disdain in poorly interpreted Scripture.

Challies, to be fair, makes a convoluted, inane attempt to justify how The Shack is not the same as The Chronicles of Narnia, but it ultimately comes down to the fact that even Neo-Calvinists aren’t allowed to dislike C. S. Lewis without sacrificing their fan-base.

2. Not being Calvinist is not the same as Heresy

This is a problem the fundamentalist, resurgent Neo-Calvinism can’t seem to get straight: Calvinism has only been around since the 1500s. This new radicalized version is only a few decades old (popularized by John Piper, Tim Challies, Mark Driscoll, and basically everyone in the unfortunately named Gospel Coalition).* Literally billions of people at this point have come into a relationship with God outside of the needlessly myopic strain of Christianity these guys teach. But suggest women are equally gifted and called to preach and teach? Point out the backward, bloodthirsty theological systems overemphasizing Penal Substitution as the only theory of atonement creates? Suggest God actually died for everyone (like the Bible states repeatedly), not just a chosen few?

(It’s worth noting that Piper, Driscoll and even Al Mohler have been silent leading up to the film’s release – only Challies has made any noise I’ve seen. But the arguments being resurrected against The Shack all go back to their comments when the book was originally released).

A survey of the various invectives leveled against The Shack then and now reveals that the vast majority of the criticisms are precisely of this variety:

Rejecting Penal Substitution as a Theory of Atonement

Young is among the many who reject Penal Substitution (as taught by Neo-Calvinism) as anything but a badly rendered biblical theme strained through a 16th-century Swiss legal lens. Penal Substitution is the idea that on the Cross, the Father was punishing Jesus (penal) for the sin of humanity (Jesus was a substitute for us). There are some ways to understand Penal Substitution that are in keeping with the larger biblical witness (and that don’t ultimately make God look like a divine child abuser). N. T. Wright’s excellent new book, The Day the Revolution Began is a great place to start, as are this book and this one.

The important note here: Penal Substitution as a coherent theory of atonement didn’t even exist until the 16th century. So not believing in it can’t be heresy.

Hierarchy in the Trinity

Another confusing heresy charge you’ll hear is that The Shack teaches there’s no hierarchy in the Trinity – the Father, Son and Spirit all submit to each other in mutual love. This is a complicated topic (here’s a great series of blog posts on it), but suffice to say: what’s at stake for the Neo-Calvininsts in this debate is authority. Their churches are autocratic hierarchies where the lead pastor functions as a father figure for the congregation (yes, it’s super unhealthy, and see “Maleness of God” below).

Because Neo-Calvinism reads authoritative hierarchy into the Trinity, they’re able to appeal to said hierarchy to structure their churches. This is a clean illustration of the maxim, “We are what we worship.” Piper, Driscoll and friends worship a God who has a male authority figure who wields absolute power over those below him. So they create churches, consciously or unconsciously, that imitate this image of God.

But this is far from the only way to understand the relation of persons in the Trinity or how authority works. It’s probably painfully obvious by now I disagree with the Neo-Calvinists on all these issues.

The important point is that rejecting a hierarchy of authority in the Trinity doesn’t make you a heretic.

The other charged leveled against The Shack is one of universalism (which, while debatable, still isn’t heresy!). While Young himself might be a universalist (I wouldn’t know; I’ve not met him to ask), the theology of The Shack is most certainly not. The quote most often cited is where Mac asks Papa if all roads lead to Heaven. Papa replies,

Most roads don’t lead anywhere. What it does mean is that I will travel any road to find you.

Somehow, heresy hunters are sure this is universalism. But it’s not. This statement in no way denies the exclusivity of Christ. It simply observes that God is not bound by the structures of the institutional Church. Anyone who’s spent any time in the company of those outside the Church or on the mission field knows this to be true. God is constantly at work, all over the place. If God can use astrology to lead Persian magicians to the Christ child, then certainly God can speak to a faithful Muslim in a dream and send them to a Christian friend to learn more about Isa (the Muslim name for Jesus). I have a friend who works with Syrian refugees in Lebanon who has attested to this happening again and again.

Claiming that God can work through anyone or anything to bring people to faith in Christ isn’t universalism. It’s grace.

The other bit that gets the Neo-Calvinists worked up is that The Shack denies Limited Atonement. Limited Atonement is one of the 5 points of Calvinism, which claims that Jesus only atoned for the sins of the Elect. The Shack insists (along with pretty much every Christian who’s not a Calvinist) that when the Bible says God died for the whole world, “world” means “world” not “a randomly chosen elect group of people”. That’s mostly based on the Greek word used, kosmos, which in many places means “world”, but everywhere else also means “world”. Again, denying Limited Atonement isn’t heresy.

The Maleness of God

Since Neo-Calvinists are complementarian, their theology has to justify their exclusion of women from positions of authority. Most often this is done by affirming God’s maleness (as when Piper infamously claimed Christianity has a “decidedly masculine feel”). That this is still a conversation in 2017 strains credulity, but some churches continue to insist on relegating women to second-class status. Of course they’re upset God is portrayed as a woman.

So there you have it. The Shack is a piece of fiction that happens not to align with Neo-Calvinist beliefs.

None of the heresy charges have anything to do with the creeds of the Church, which dismisses them out of hand as heresy. If you’re a Neo-Calvinist, you probably won’t like The Shack. Also, since it stars Sam Worthington and Tim McGraw (?), there’s a good chance you won’t like it even if you loved the book.

Bottom Line: The Shack isn’t heresy. It’s probably not going to be a great movie. But it’s not heresy.