This was my parents’ room. I’d have been whipped if they found me in here. Guess there’s no one left to whip me anymore. – Woody 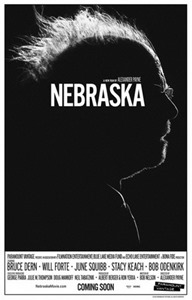 Nebraska is the newest film from director Alexander Payne. Some of Payne’s previous films – About Schmidt and The Descendants – rank among my favorite films of all time, and I realized as I watched Nebraska that Payne is one of my favorite directors period. That’s an odd realization: Payne’s films are generally critically applauded but not particularly popular. His films are famously filled with rather unlikeable characters and so-awkward-you’ll-squirm situation after situation. But I connect to Payne’s films on some deep, visceral level.

Payne masterfully creates empathy for his unlikable protagonists, rendering them fully human in our eyes. Nebraska is no different.

Nebraska opens on eighty(ish)-year old Woody Grant hobbling down the side of a highway in Billings, Montana. Woody is stopped by a policeman who asks where he’s going. Woody gestures indifferently ahead of himself. The officer then asks where he came from, and Woody casts an equally indifferent thumb behind him.

This introduction is a harbinger of what’s to come in the film: Nebraska is a picture of the human condition, of the inevitability of the march we all take toward old age and how thoroughly that journey robs us of our dignity.

Bruce Dern spectacularly embodies the inevitable, inescapable consequences of growing old in Woody Grant. Woody is a quiet, grumpy old alcoholic in the early stages of Alzheimer’s. He’s a retired mechanic who can’t drive, whose body is breaking down, who is constantly berated by his wife, Kate (a so-good-you’ll-hate-her June Squibb).

Woody has just been informed he won $1 million (in a Publisher’s Weekly scam). He was out on that road to walk to Lincoln, Nebraska to collect the prize money he’s sure he’s won. 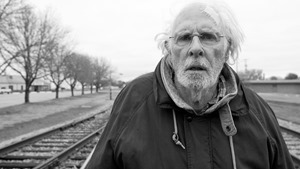 Nebraska is a classic quest film. We know from the beginning Woody’s not a winner. So what’s he really searching for?

Woody’s son David (played by a Will Forte you didn’t know could be so good!) agrees to drive his dad to Lincoln, mostly to get out of town for a few days himself (David is clearly stuck – not moving forward or backward in his life). Along the way, Woody and David end up in Woody’s hometown (Hawthorne, NE), staying with Woody’s brother for the weekend.

What’s left of Woody’s family uses his detour as an excuse to gather, so David ends up spending a weekend in his father’s hometown, around friends and family who knew his father as he never did: as a young adult.

Until this journey, David could only see his dad as a failed father, a selfish alcoholic who never did much for his wife or his kids. But the various Hawthornites reveal a troubled war veteran who helped out his friends and family a little too often, who didn’t have much because he’d given so much away.

Hawthorne changes Woody, too. As word of his newfound wealth spreads, Woody starts walking a little taller, gaining a bit of dignity. He dreams about what he’ll do with his new wealth: buying a new truck and an air compressor. Of course, those won’t cost nearly $1 million. So everyone – including a villainous Stacy Keach – wants to know exactly what he’s going to do with all the rest.

In the end, dignity is exactly what Woody finds on his journey. But not from his imagined prize money. 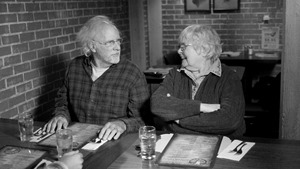 In seeing his father as fully human – as flawed and hopeful as any of the rest of us, he gives his father the dignity he’d set out to obtain. And that is the heart of this particular film: time marches inevitably forward for all of us. Aging isn’t dignified. By the time we reach the end of our lives, the lack of meaning collapses in on us, leaving our lives, our legacy as bleak as Nebraska’s black-and-white presentation.

Meaning, according to Nebraska, is found in the midst of those we love – a theme common to Payne’s films. 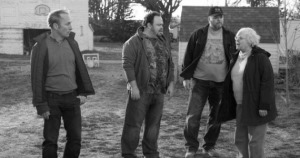 Though Payne’s films aren’t explicitly spiritual, they affirm our basic nature as relational beings. Nebraska shows us a dysfunctional family that’s all too-recognizable. In other words, they’re not so crazy we can’t find ourselves in them. So when Payne shows us their human sides, when they find meaning is in each other.

At the end of the day, this is the Christian affirmation: our lives are meaningful not in how well we build them: in the amount of money we acquire or number of children we have or how big our houses are. Our lives are meaningful in as much as we are in relationship with God and with each other. I’ve no idea if Payne would agree or not, but Christians affirm this is because we are created in the image of a God who – as Trinity – is fundamentally relational.

BOTTOM LINE: Nebraska reminds us that we are fundamentally relational beings. The film’s awkward plot works because of the outstanding acting.

YOUR TURN: What did you think of Nebraska? Are you a fan of Payne’s films?