Michael Cassutt is a writer, producer, and author with over thirty decades experience in television. He’s a well-respected creator in the sci-fi/fantasy realm and has collaborated with folks like George R.R. Martin and David Goyer. 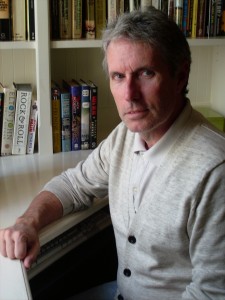 He is currently working on the hit show Z Nation as co-executive producer and writer. We recently spent some time on set with Michael in Spokane, Washington to talk about working in Hollywood.

Here is the transcript of our segment about Captain Cosmos, the new show he’s developing with George Martin for HBO.

Matt: I know you love science fiction, and we heard that recently you sold a new show—Captain Cosmos—which sounds like golden age science fiction. What can you tell us about that?

Michael: Captain Cosmos is a co-creation between me and George R.R. Martin. It’s a drama, lighter-hearted than most, and it’s for HBO. At the moment it’s just a script. It hasn’t gone past the development stage, but the basic idea is about a writer who has the science fiction gene and the science fiction mentality, in fact, who has written science fiction stories under pen names that are in magazines.

Michael: Yes, but he’s a closet pulp writer. His real career, and this is post World War II New York, is as a very acclaimed radio mystery writer. And he finds that that world is dying, and that world is too frustrating. It won’t let him tell the stories he wants to tell. And he realizes when he gets an offer out of the blue from a couple of drunks about a new thing called a television show, a science fiction television show, that even though it’s aimed at kids that “I may be able to do something with this besides the other thing that’s kind of going away.” So it’s about his trials and tribulations to figure out how to make that show work. And how to tell stories where you can deal with race relations without calling it the African-American in the South and doing it in Alabama. Instead it’s Marsport and the red-skinned Martians who are having problems with humans.

Matt: So you’re kind of hitting on the first seasons of the original Star Trek stuff.

Michael: Well the idea is that the protagonist is basically Rod Serling or Gene Rodenberry kind of a few years earlier, someone who is trying to do more ambitious stuff than you would think from the genre materials in it.

Matt: Sneaking it in because it’s for kids.

Michael: And ultimately people get onto him, so the drama can go a little dark. It’s something that might have the look and feel of Mad Men because it’s about media way in the past. And some fun and it’s all about the craziness of making a really cheap live TV show. We hope to actually make the 15 minute episodes at the same time we make the real episodes.

Michael: And it’s about him and his wife and writing partner of his and the people he works for and casting an African-American in a TV role in 1949. How did you do that? You didn’t do that, so how did you figure out how to do that. So it’s playing with that kind of stuff but also just with the science fiction community and world, especially the New York world. There will probably be some walk-ons by some thinly disguised versions of science fiction personalities of the day. But George has forbid me to say more on that.

Clay: We’ve only got a couple minutes left, but it just strikes me that at that time in America, two World Wars, a Great Depression, people just wanted normalcy in the 1950s. They wanted the appearance of it, so you get to really kind of play around in the confines of that setting.

Michael: That’s exactly it. I mean, that period post-war when Gore Vidal and other writers were active. It was the brief age of American empire, sort of the high water mark of American culture which was still ultimately ‘don’t rock the boat’ or ‘rock it only in acceptable ways.’ And our guy is trying to figure out how to rock it in unacceptable ways, so it should be fun.

JR: How much of the tension in the show is coming… so in television right now HBO just launched HBO Now which is their finally completely free-standing…

JR: …you don’t have to have any cable. We were just talking the other day about how Major League Baseball and the NFL are trying to figure out “how do we kind of break free of ESPN and go to streaming” so it seems like we’re in the middle of another sort of technological upheaval.

JR: So is that informing the show as well?

Michael: Yes, because it was a new means of getting stories to people. I teach television at USC so I have a lot of this stuff in my head right now, but in something like 1948 there may have been two million television sets in the United States. Three to four years later there were 50 million.

Michael: So that was an explosion that is unprecedented in terms of introducing people to a new form of storytelling in the way it was accepted. It killed the popular magazines for fiction. It killed the pulps. It killed radio drama. So it was like the asteroid hitting the earth and killing the dinosaurs. And yeah, the cutting the cord digital, over-the-top channels and streaming is changing everything. There are 400 scripted series done right now. It’s an insane number in one year, and we’re all thinking ‘well it’s gotta stop somewhere’ and the answer is it will stop when it stops. I’m not gonna stop it. As a writer it’s like it’s raining, hand me a bucket.

Clay: Well, we are really excited about the second season of Z Nation. Captain Cosmos sounds like it’s gonna be awesome, and we appreciate you taking some time to talk about it with us.

JR: Can I ask one more question?

JR: Most of the people who listen to our show are not on the inside of the industry, so you say Captain Cosmos is in development. Do you have any idea, what’s a normal timeline from like where you are to when we can sit down and watch the first episode?

Michael: In normal standard network even maybe a basic cable development you would pitch a show in July or August you would write that pilot script and rewrite and rewrite it up to about January or February. The network might pick it up to pilot. That pilot would be filmed in March and April. You would be on the air the following September, so it would be a year.

Michael:  This is HBO, so double everything and add a great degree of uncertainty.

Clay: Well it sounds like they’re tearing the set down. This building’s coming down, so Michael Cassutt thanks so much.

To hear the complete interview and much more, check out our 100th episode extravaganza over at StoryMen.us.