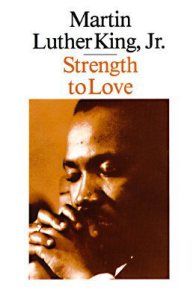 We so often think of Martin Luther King as a leader and speaker that we often forget he was a preacher and writer. His wife Coretta said that Strength To Love (1963) was the book “…that people consistently tell me has changed their lives.” The messages in that work are just as relevant today as they were a half century ago.

His breadth of knowledge is remarkable. One chapter he’s quoting Shakespeare and Keats, the next he’s demonstrating a historical understanding of the great civilizations. One sermon breaks down psychological responses to disappointment, the next features lessons of science and the universe. Logic and philosophy are also woven throughout. King was a Renaissance Man.

As with any work saturated in truth, Strength To Love contains vulnerability as well. He recalls the early days of the movement when he was new to leadership, when the threats could no longer be sloughed off, when fear and doubt crept in. After another threatening call late at night he reached his midnight garden.

“I tried to think of a way to move out of the picture without appearing to be a coward.” He then began to pray aloud over his kitchen table.

“I am here taking a stand for what I believe is right. But now I am afraid. The people are looking to me for leadership, and if I stand before them without strength and courage, they too will falter. I am at the end of my powers. I have nothing left. I’ve come to the point where I can’t face it alone.” 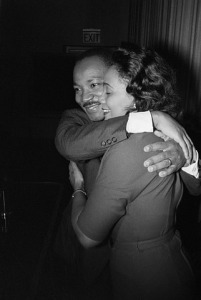 He emerged from that night with a renewed inner calm “ready to face anything.” Three nights later the home he provided for his family was bombed. His faith got him through.

King challenged those around him to become nonconformists with words just as meaningful today.

“In these days of worldwide confusion, there is a dire need for men and women who will courageously do battle for truth…We must make a choice.”

Traveling that road was never supposed to be easy. Imagine your six-year-old daughter asking, “Daddy, why do you have to go to jail so much?” King reminds us that the cross we bear always precedes the crown we wear. He understood the costs of his cause. Following the strategy of Gandhi and living for Jesus made a tragic fate something to be reckoned with.

Our world is still divided. Hatred spews in conversations as beliefs and ideas collide. The civility King spoke of is missing. Everyone believes they are right and uses that feeling as a weapon to pummel anyone who disagrees.

In King’s day only one side truly was right on matters of race, the side that fought for ultimate equality. He still invested time telling his followers how they must act during their quest and consistently challenged their shortcomings, from inappropriate responses to internal hypocrisy. Nonviolent movements require intense accountability. 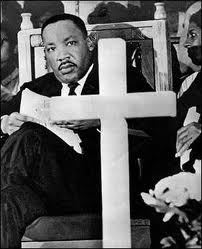 Consider your political affiliations today. Are those around you held to that same accountability? Are you? Hypocrisy is rampant in the circus that is our society. We condemn the opposition for behavior then defend the same acts when our side does the same. King would no doubt wonder why we spend so much time ranting about the speck of dust in our neighbor’s eye when we have a massive plank sticking out of our own.

Issues of race are different now than in the days of Dr. King, but ignorance remains. In fact, our ignorance today is only heightened by the interconnected age of information in which we live. Technology has shrunk the world, and we are global neighbors now. Will we simply point out all of the world’s problems or will we step into the gap like King once did.

A stand like that takes courage as King knew during those midnights of fear. We must attack the situation, he said, faithfully and with the ultimate human ethic: aggressive love. Such a love requires unthinkable altruism, even to the point of going out of our way to help those who hate us. No way that will ever be easy, and such living is certainly not for the weak. In fact, you have got to be able to find strength to love. 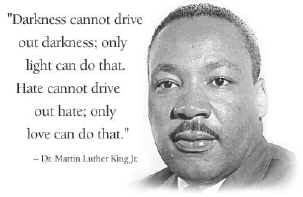 We honor the life of Martin Luther King Jr., who demonstrated love for his enemies. One of those enemies killed him in the end, but King taught that retaliation would never solve anything. Violence cannot overcome violence; evil will not defeat evil. But “love is the most durable power in the world,” he said in a sermon on loving even those who hate you.

We should make the legacy of King more than a day off each year by finding a way to overcome our differences for a greater good. “One of the great tragedies of life is that men seldom bridge the gulf between practice and profession, between doing and saying,” he wrote in a message called Love In Action.

Martin Luther King spoke truth, taught love, and practiced what he preached. Can we do the same? “We must make a choice.”