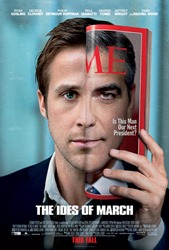 First, can we all agree that the poster for this film is one of the greatest of all time? Seriously.

If you’ve been to the movies this year, chances are, you’ve seen Ryan Gosling. In Ides of March, co-starring, written and directed by George Clooney, Gosling plays 30-year-old Stephen Meyers. Stephen is one of Governor Mike Morris’ (Clooney) chief presidential campaign staff members.

A political movie called the Ides of March… this has betrayal written all over it.

What unites Stephen and Morris are their optimism. Morris is a democrat candidate – he’s pro-choice and pro-gay marriage. He calls loudly for alternative energy sources and is an atheist. He’s also committed to running a clean race. No dirty ads or tactics, no selling cabinet seats. A race of integrity.

And that’s what inspires Stephen. We learn that Stephen is something of a prodigy. Already recognized as one of the best in the country, he’s had offers from many candidates. But he doggedly supports Morris because he believes in Morris.

Stephen’s and Morris’ idealism comes to a head in the Ohio caucus.* 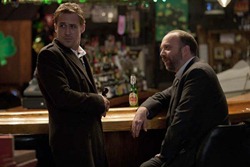 As the Democratic primaries get more and more cutthroat, both Stephan and Morris find themselves compromising more and more. Morris reluctantly green lights an ad campaign to attack his competitor, Senator Pullman.

Duffy warns Stephen that his optimism is naïve. He’ll eventually end up corrupt and jaded, just like the rest of them.

Stephen involves himself with a young intern, Molly Stearns, who also happens to be the daughter of the president of the Democratic National Convention. When he learns that a one-time late-night tryst between her and Morris left her pregnant, he quietly arranges an abortion and fires Molly from the campaign.

Meanwhile, Morris’ campaign manager (and Stephen’s boss) Paul Zara (Philip Seymour Hoffman) is trying to negotiate the support of a Senator Thompson for Morris. Thompson wants a cabinet position in return for the votes he can guarantee. Morris is still unwilling.

Both Stephen and Morris see these compromises as small sacrifices they must make to get Morris in office. Ideals can’t be implemented if you’re not in office. 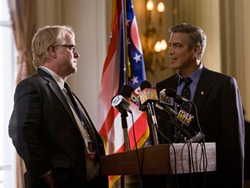 Despite all he’s done to protect Morris, Stephen’s world begins to unravel. After Stephen drops Molly off at the clinic, he confesses his secret meeting to Zara. Zara perceives Stephen’s duplicity as a betrayal and fires him on the spot. When Molly hears that Stephen’s been fired, she apparently commits suicide by overdosing.

Stephen goes to Duffy to accept his job. Duffy politely refuses at first, but when Stephen presses him, Duffy finally confesses that he played Stephen. Stephen’s skill made him a threat, and Duffy knew that Zara would fire him just for meeting with Duffy. So Duffy arranged a meeting and took Stephen out of the equation all together.

Stephen is left abandoned and friendless, facing a career that seems over before it really began. 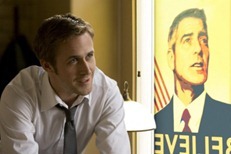 Stephen threatens Morris with exposing his affair and abortion. Morris fires Zara names Stephen his new campaign manager. Stephen also forces him to sell the cabinet seat to Thompson, as it’s now the only way Morris can win.

Morris’ acquiescence is the last step in both men’s journey to the bottom. Duffy’s prophecy turns out to be eerily accurate: Morris has become the candidate he swore he never would. And Stephen is supporting a man he no longer believes in, running a corrupt, compromised campaign.

Ides of March is a brutal critique of our political system.

Everyone wonders why there’re no honest politicians. According to the film, it’s because principles and ideals won’t get you elected. If you want the office, you have to play the game. And the game is backdoor deals and compromise.

So in the end, who was really betrayed? Stephen, Morris, the people they want to represent. Our ideals. Take your pick. I couldn’t help but think of the Obama and McCain we met before they got their nominations, before they had to play the game. How much their rhetoric changed once they’d both become Party men.

We wonder why nothing changes in our country? Ides of March points to the system itself. It’s broken, poisoned. And it breaks and poisons anyone who joins it, anyone who participates in it. In that sense, the American political system betrays us all.

Bottom Line: A tragic, incisive exploration of the road to the White House. Ides of March begs the question: Just how sustainable is this broken system?

Your Turn: What did you think of Ides of March? Do you agree with its pessimistic take on our political system?

*Yup, a lot of this was filmed at Miami University, about an hour from my house! That and all the references to the various Ohio mascots – Buckeyes and Bearcats, added an extra layer of fun to this film.