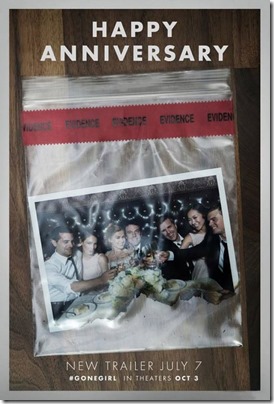 Gone Girl is the newest David Fincher film, an adaptation of the 2012 bestselling novel by Gillian Flynn (Flynn also wrote the screenplay, which will surely take home the Best Adapted Screenplay Oscar next year). The story centers on Nick (Ben Affleck) and Amy Dunn (Rosamund Pike), a super-couple whose marriage has slowly deteriorated. The film opens on July 5, the morning of Nick and Amy’s 5th wedding anniversary. Amy is missing, and there’s evidence of foul play. As details emerge, the prime suspect is none other than Nick himself.

Gone Girl is a terrific film – the directing is beautiful. The acting, particularly from the two leads, is terrific all around. Affleck was an inspired choice for Nick Dunn – he captures the cocky-but-likeable swagger of Nick perfectly. (The only character I didn’t love was Neil Patrick Harris’ Desi Collings. I’m usually a fan of Harris, but this was a bad casting call.) As an adaptation, Gone Girl is marvelous – it preserved the essential elements that made the book fantastic, while also standing on its own as an excellent film.

Gone Girl is well worth your time. But it’s more than just a good thriller. The film invites us to reflect on the nature of marriage.

Spoilers after the jump

At its core, Gone Girl is about the gap between appearance and reality. At first, Amy appears to have been abducted, and Nick appears to be the culprit. Amy appears to be the victim of a failing marriage. It’s worth noting that the story Amy constructs is so believable, it’s cliché: two young professionals who fall in love, then fall on hard times and fall apart. She wants to try to have a baby to fix things; he grows angry and abusive.

As the story unfolds, we see characters trying to maintain appearances even as we are privy to the truth (so it appears). As we learn Nick isn’t the perfect husband he appears to be, Nick strives to be that caring, concerned husband for the cameras and community that’s always watching. And the big shock comes when we learn the whole drama has been orchestrated by Amy herself, that almost nothing is as it appears to be at all.

In Gone Girl, the reality is consistently much worse than the appearance.

And at the heart of it all is the marriage of Nick and Amy. Amy, who spent her whole life living in the shadow of Amazing Amy, the thinly-fictionalized and idealized version of her created by her parents. And Nick, who escaped small-town Hannibal, MO for the Big Apple. Amy, whose reality can never match the fiction she’s compared to on a daily basis (and the one she holds herself to in her head – her dissection of the “Cool Wife” should be required viewing). And Nick, who returns novel-less and jobless to take care of his dying mother in Twain’s shadow.

Gone Girl is filled with manipulation of appearance and the inevitability of reality.

Throughout the film, the media’s near-constant narration of the Search for Amy Dunn clashes with the reality we watch unfold. Nick’s affair cannot remain hidden. And despite all her careful planning, Amy has spent her entire life in the shelter of Privilege. When she’s confronted by the desperation of the truly poor, she’s forced into the arms of Desi, another near-psychopath (though possibly of Amy’s own making).

The film invites us to consider that marriage carries the same unavoidable tension. That the institution might be inevitably flawed. Nick isn’t a good guy. Amy’s a psychopath. But their marriage began with such promise. They were so good together at first. It was only later, after both lost their jobs, ran out of money and uprooted their lives, that they began to fray and then unravel.

Gone Girl suggests that marriage encourages us to be fake. That because you never really know someone else, especially at the beginning of a relationship when both persons are putting their best feet forward, the institution of marriage inherently encourages both partners to continue to create that façade. To live into the well-intentioned fibs you told in the beginning until they become full-blown lies. Until the gulf between appearance and reality is uncrossable.

In Gone Girl, marriage brings out the worst in us. It is the anti-sacrament.

Sacrament is a religious term. It refers to aspects of creation that become a channel for God’s grace. Communion is a sacrament – when the people of God receive communion together, bread and wine juice become something more. The ritual takes on a spiritual component. We don’t just remember Jesus’ death, we experience the presence of God in a way that we are more able to follow him. Same with baptism. And same with marriage.

In the Christian tradition, marriage is sacramental. Within the marriage vow, both partners experience God’s grace in unique ways. We have the opportunity to give ourselves to our spouses, to abandon ourselves wholly to them, in imitation of how Jesus gave himself wholly for us. Similarly, we have the opportunity to receive the gift of another person’s whole self, the daily chance to practice radical welcome of the Other with no judgment.

A sacramental understanding of marriage is predicated on the assumption that the person you married isn’t perfect.

Marriage is a means of grace. Marriage can transform you, can make you into a better person. When the marriage bed is an embrace, an open and safe space for us to be our true selves, then the act of marrying becomes an exercise in hope. We choose to weather the hard times together because we believe they are a crucible in which God is forming us, making us into the persons we were meant to be through the power of love (and all the Huey Lewis fans said  WHAT!)

Gone Girl shows us a marriage that begins with two people trying to be better than they are. But rather than embrace the truth about each other, that Nick and Amy are both less than the façade the have created, that they each need each other to become their best selves, Nick and Amy hide from each other. They allow the inevitable hardships that come in every life to drive a wedge between them, to push them away from each other.

The Dunn marriage was from the beginning an anti-sacrament. It brought out the worst in them rather than creating them to be the best.

Or will we settle for the anti-sacrament? Will we allow the challenges of life to crush rather than create us? Gone Girl suggests the crushing is all we have, that marriage inevitably reveals us to be our worst selves.

Better, I say, to know from the beginning that we married the wrong person (and so did our spouses). That marriage makes us into the right persons when we give ourselves over to it.

YOUR TURN: What did you think of Gone Girl’s picture of marriage? What about the film overall?