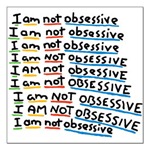 The third factor Dr. Leonard Sax claims harms girls today is a broad category he labels “obsessions”. Sax cites a variety of seemingly-disparate problem behaviors – eating disorders, drinking, cutting, and over-commitment to either sports or academics – as manifestations of the same underlying problem.

Because girls aren’t developing an authentic sense of Self, they are learning to find identity, to self-medicate with damaging behaviors.

Some behaviors are obviously harmful, like binge-drinking and cutting. Others, though, can look like healthy achievement. Girls often pour all their energies into a single sport or academic achievement to gain a sense of identity from peak performance in that activity.

Girls trying to find their identity in these behaviors manifest a “maladaptive perfectionism”, which differs significantly from the healthy drive to do our best.

Maladaptive perfectionism is driven by an intense need to avoid failure and to appear flawless… [It] hides deep-seated feelings of insecurity and vulnerability.

Perfectionism isn’t the core issue. Sax sees this insecurity and vulnerability, which drives so many girls to unhealthy excess in socially acceptable directions, at the core of other girls’ choices to turn to alcohol or cutting.

The notion of “perfectionism” doesn’t get to the core of the issue. “Anorexia of the soul” comes closer… It’s a search for an authentic sense of self.

Though he doesn’t draw the connection, if Sax is right, this ‘anorexia of the soul’ also fuels many girls who seek attention and form identity by giving sexual favors.

According to Sax, girls are trying to figure out what becoming an adult looks like. But because they’re not cultivating healthy inner lives – because they’re over-sexualized, objectified and without  safe, consistent intrapersonal space – girls build an identity through these various channels.

So what can we do to help girls cultivate a healthy identity?

As with each of the factors, Sax offers tons of practical, helpful ideas. But the bottom line is that parents (and the rest of us) should be diligent to engage girls, to help them create and protect a vibrant inner space where they can create an identity for themselves.

This space should be away from any Gaze, a judgment-free zone that belongs to the girl alone. The identity girls form in this space enables a healthy transition to adulthood:

Becoming a mature adult means, among other things, that you define yourself relative to your own potential, not relative to somebody else’s standard.

As in Boys Adrift, Sax blames BPAs in plastics for contributing to girls’ struggle to develop. Since BPAs mimic estrogen in the human body, Sax posits that they cause the early-onset of puberty in young girls (which is now happening as early as 7).

It’s not just BPAs. Sax cites a variety of other environmental factors that seem (according to current research) to contribute to early-onset puberty, including less breast-feeding (probably because of BPA-plastic bottles), childhood obesity and even loss of biological father in the home.

Most 11-year-old girls who look 15 are not ready to handle the attention they may attract when they go to the mall or the beach. It’s often confusing and embarrassing to them. It may even be frightening.

Most of the factors Sax claims contribute to early-onset puberty in girls are the result of our desire for convenience. We may be achieving our quest to have the world our way, to live life on our terms, at the expense of our children. According to Sax, what we’ve sacrificed upon the altar of convenience is what he calls girls’ “middle childhood” – a period from about 8-12:

That’s the age when previous generations of girls were able to develop a sense of self without regard to their sexuality, without being overly concerned about how they looked in the eyes of boys.

NEXT TIME: Dr. Sax’s proposed solutions for Girls on the Edge.

YOUR TURN: Do you agree that different negative behaviors girls choose have a common core cause? How important are environmental factors?What do you think of Dr. Sax’s four factors?