A while ago there was quite a skirmish among theology nerds in the blogosphere over whether one can call the writing of any theologian a “must read” for all Christians. It was caused when someone asserted that anyone who is serious about modern theology must engage the work of Karl Barth. Others responded that there is no reason to put Barth on such a pedestal, especially when lesser read theologians such as James Cone or Gustavo Gutiérrez may benefit the Church more than Barth because their prophetic critiques are more relevant to the current moment. Personally, since I am apt to embrace the fallacy argumentum ad temperantiam I may not be the best person to answer this question. My answer goes something like, “I understand what both sides are saying and I think both sides make an interesting point.” That said, I will now try to unpack the question of whether we can speak of “Christian Classics”. 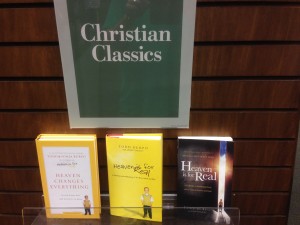 In the Christian Tradition we have a Canon of books called Scripture that has been embraced by the global Church (for the most part since there is some diversity of Canon across various traditions). We may describe it as “must read”, although studies on “biblical literacy” (or, the lack thereof) indicate that even our Bible is not “must read” for many (most?) Christians. But what about those who are serious about their discipleship, about loving God with our whole being, including our minds? Other than the Bible can we speak of “must read” books, or Christian “Classics”?

I think the answer may be yes and no. Yes, but with qualifications. There are some books that have enduring power for a reason: Augustine’s Confessions or his City of God, Calvin’s Institutes of the Christian Religion, Luther’s Preface to Romans, Wesley’s Notes on the Bible, even Barth’s Church Dogmatics. For one reason or another people have found these books to be valuable, either because they inspired and inform one’s theological thinking (e.g., The Institutes for the Reformed; Wesley’s collected sermons for Methodists) or they provide a contrast, an opposing position, worth engaging in order to sharpen one’s own thinking. In one sense these books aren’t classics because they “ought” to be classics, but simply because they are classics. They have been read continually and people keep telling other people to read them. Someone may say, “You must read Barth’s Church Dogmatics!” but that doesn’t mean that if someone choses not to read them that their Christianity will crumble. It may or may not matter in the grand scheme of things, but for many it does matter and certain writings and collections of writings have become valued dearly because of their influence.

On the other hand, as argued by those who say we need to read more of the writings of Cone and Gutiérrez, some books aren’t considered “classic” because frankly they are uncomfortable for us. I may be able to rally around many of the ideas presented by John Wesley while being discomforted by others, but there is a good chance that James Cone is going to make me very, very uncomfortable (and maybe for good reasons!) so that I’d rather read Luther because while I may find him intellectually stimulating he doesn’t threaten me with a complete and utterly paradigm shifting view of the world as would Cone. In this sense, critics of the idea of a “canon beyond the canon” or “must read” Christian Classics are right: just because a book has been deemed “classic” doesn’t mean it is more valuable than a book that has been overlooked or even intentionally marginalized.

Lest one think this whole discussion is an exercise in futility let me end with a story attached to a picture. The story is taken from a few days ago. I was browsing books at a local Barnes and Noble here in San Antonio, TX. I never buy books from B&N because most of the section under “Christian” is a waste of paper, but I get it, B&N has to put on their shelves what will sell and if that means twenty copies of something by Joel Osteen and three by Augustine it is business and we the reading public should be blamed more than the company providing us with what we want. But then I came across an end cap highlighting “Christian Classics” and to my horror it was a shelf of Heaven is for Real books, special movie edition books, and even discussion guides. Christian Classics? What? How?

This brought to my mind the debate I’ve been discussing. In one sense we do need a “Hall of Fame” of great books that have endured the years showing depth and width in thought and proclamation if for no other reason than to set a standard. An imperfect standard may be better than no standard for I am willing to admit that Calvin’s works may be ignored to my own detriment, but I refuse to say that same thing about Heaven is For Real! On the other hand, this established the very point made by critics of “Christian Classics”: just because many people read a book a classic it does not necessarily make; just because the crowd says “you must read this” doesn’t mean you should spend your time reading it. A book may be overlooked and ignored that brings heaven to earth while a book may be swallowed whole by the public that is nothing more than pop-theology gone wrong. We need to try to establish a list of “classics” if for no other reason than the exercise of differentiating good Christian literature from bad is a noble one. We must also remember than popularity is not quality, and sometimes the ignored books are the real “classics” after all.

How about you? What books would you describe as Christian Classics?

[author] [author_image timthumb=’on’]https://0.academia-photos.com/184783/45400/3149296/s200_brian.leport.jpg[/author_image] [author_info]Brian LePort is a Ph.D candidate at the University of Bristol/Trinity College Bristol. He received his MA in Biblical and Theological Studies and a Master of Theology (Th.M.) from Western Seminary, where he is now an adjunct for the Online Campus. Born and raised in northern California he now resides in San Antonio, TX, with his wonderful wife, Miranda Perez-LePort. You can learn more about him at brianleport.com.[/author_info] [/author]