Is a spoiler warning even necessary? Seriously people: spoilers for all of Breaking Bad. 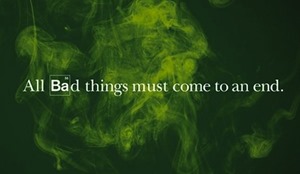 This week, Breaking Bad said its final goodbye to Walter Hartwell White, marking the finale of what is sure to go down in history as one of the greatest television shows of all time. With gripping plotting, amazing acting, top-notch production values and more, Breaking Bad delivered 62 episodes of consistent excellence that nearly never missed the mark.

More and more these days, though, television shows are remembered for how they resolve than anything else. The Shield will always be remembered for Vick Mackey’s amazing, awful, pitch-perfect send off. Lost, despite its insane popularity, massive pop-cultural impact and ratings, has become synonymous with failure to stick the landing after a final episode that left fans shrugging and wishing for more.

So for series creator Vince Gilligan and crew, bringing a series as ground-breaking and beloved as Breaking Bad to a close was a herculean task. As the final 8 episodes drew to a close, we all held our breath, wondering if they could do it. And as the dust settled on Sunday night, it seemed they’d nailed it. The internet was abuzz with adulations, many declaring Breaking Bad to be the best show with the best finale ever (even going so far as to compare it favorably to The Wire, which is clear tomfoolery).

Though the resolution was emotionally satisfying, the Breaking Bad finale betrayed the logic of the show.

Since the first episode, creator Vince Gilligan has proclaimed that Breaking Bad’s stark moral universe is one in which “actions have consequences”. (This, by the way, is just one of the many themes my friend Blake Atwood explores in his excellent book The Gospel According to Breaking Bad).  We saw that horribly (and expertly) portrayed again and again this season: Walt turns on Jesse, but his choice to involve Uncle Jack’s Neo Nazis results in Hank’s death. Jesse tries to escape from Todd’s meth lab prison so Todd made good on his promise to kill Andrea.

Gilligan’s “actions have consequences” mantra has driven the show since the first season, from Walt’s original decision to reject Elliot and Gretchen’s money to recruiting Jesse. Allowing Jane to die brought a plane crashing into Walt’s house. Breaking into Gus Fring’s inner circle leads to Hank getting shot and that grisly showdown in the nursing home.

The show promised that Walt’s transformation into Heisenberg would have consequences. But that promise wasn’t paid off.

The Walter White we meet in the first episode is dying of cancer. His original goal in cooking meth was to earn enough money to care for his family after he died. Though his former business partners Elliot and Gretchen offer to pay for his treatment, Walt refuses out of pride manifested as little man syndrome. According to the logic of the show, this first refusal should’ve had dramatic consequences.

And in a certain sense, it did: the whole show is one inevitable step after another, driven by Walt’s unquenchable pride. But what ending do we get? Walt dies, and (we assume) his family gets all the money they’ll ever need. Walt vanquishes every enemy he created for himself and Skyler escapes every consequence of his actions. Walt even makes Elliot and Gretchen feel small, intimidating them into being the untraceable conduit for his money to reach his family.

Don’t miss my interview with Gospel According to Breaking Bad author Blake Atwood on #StoryMen!

In the end, Walt gets everything he wanted in the first episode. The monster gets a happy ending.

Granted, death doesn’t seem to be very happy, but Walt’s death has been a reality since episode one. Walt never wanted to live, he only wanted to provide a legacy for his family. In this sense, then, Walt faces no true consequences for his actions. He wins. Even his adopted son Jesse is free.

Despite the massive foreshadowing that at least Jesse (PINKman) and Holly (always dressed in pink), and possibly even Skyler (who wore a lot of pink in the last few episodes) might die as a result of Walt’s actions, they all survive Walt, finally escaping Heisenberg’s reign of terror.

All this provided for an emotionally satisfying ending, the ending we wanted. As several tweeps observed, this was by far the happiest ending possible for the show. But Walt didn’t earn his redemption. He finally confesses to Skyler that his actions as Heisenberg were “for me”, that they weren’t really about the family. He made a good drug lord. He felt alive as Heisenberg in a way Walt never did. As Heisenberg, he felt big.

Ultimately, Walt uses “Heisenberg” to conquer all his enemies. All he really proves is that he’s bigger than everyone else. He never actually repents.

We don’t see Walt “learn his lesson” – we’re supposed to assume it was during his months in the cabin, perhaps inspired by repeated viewings of Mr. Magorium’s Wonder Emporium. But he returns to Albuquerque, announces his revelation to Skyler, then proceeds to fix everything as Heisenberg.

In the end, Heisenberg is the solution to Walt’s problems, not the cause. He gets to have his cake and eat it too. So as the final song plays, the lyrics proclaiming “I got what I deserved,” and Walter White collapses to the floor, he has a contented, relieved smile on his face.

Of course he does. Walt got everything he wanted. And we smile along, because we did too. We loved seeing Heisenberg humiliate and intimidate Elliot and Gretchen. Outsmart Uncle Jack. Give Jesse his chance for revenge. And take care of Walt’s family. It was a consummately satisfying resolution.

The problem is, for a show that prided itself on its moral realism, the ending couldn’t be more disingenuous. Walt’s actions, in the end, didn’t actually have any consequences.

Bottom Line: By giving Walt a happy ending, the writers betrayed Breaking Bad’s driving conviction that actions have consequences. We liked it, but it was the wrong ending.

YOUR TURN: What did you think of the Breaking Bad finale? Did Walt earn his happy ending?