This review was originally featured at RELEVANT Magazine. Click here to read it!

I’ve got a confession for you:

I know. You’re shocked, right? Big surprise these days, when skepticism is the norm. We’ve seen it all (on YouTube, at least). Nothing catches us off guard anymore.

If you get me, if you’re cynical too, you may not want to read Love Does by Bob Goff (aka Don Miller’s best friend).

Here’s the thing about Love Does: it’s sort of a memoire, sort of an invitation. Each brief chapter is a story from Bob’s life (trust me here, he doesn’t want to be called. ‘Mr. Goff’) followed by Bob’s reflection on the story.

Though at times the formula can feel rote, the reflections like youth-pastor-over-spiritualization, as a whole Love Does is greater than the sum of its chapters.

Bob is one of those guys who radiates life. In reading his story, you’re confident that were you to meet him, he’d greet you not with a handshake, but a friendly hug and a big smile. He describes his action-oriented theology:

Living a life fully engaged and full of whimsy and the kind of things that love does is something most people plan to do, but along the way they just kind of forget… [We need to] just land the plane on our plans to make a difference by getting to the “do” part of faith. That’s because love is never stationary. In the end, love doesn’t just keep thinking about it or keep planning for it. Simply put: love does.

The only real connection among the various chapters of Bob’s story is this deep conviction that God is profoundly, simply relational.

Each of Bob’s stories is another opportunity for him to love God more, and share that love with the people around him. For Bob, the whole world is an invitation from God:

I think God sometimes uses the completely inexplicable events in our lives to point us toward Him. We get to decide each time whether we will lean in toward what is unfolding and say yes or back away. The folks who were following Jesus in Galilee got to decide the same thing each day because there was no road map, no program, and no certainty. All they had was this person, an idea, and an invitation to come and see.

At some point, the cynic in me finally gave in. It’s clear that Bob isn’t trying to over-spiritualize his life. He simply sees the world as one big opportunity. He talks about God working in every story because he really thinks God is always working in his life. Because he just keeps saying Yes to whatever crazy adventure happens next

Bob’s not a pastor. He’s a lawyer. He’s got a wife and kids. He’s had every excuse to live an ordinary life. But instead, Bob says Yes. And the stories that result from that answer will astound you. How he met his wife, the capers he and his friends do, the time his kids invited themselves over to every major world leader’s houses (and the ones who said Yes)… they go on and on and on.

If you’re determined to be a cynic, there’s stuff to quibble about.

For instance, Bob and his friends replace their Bible Studies with Bible Doings. We cynics might claim Bob is being anti-intellectual here, but that’s clearly not his agenda. Rather, Bob is offering us a remedy to a Christian culture that spends its time infighting over doctrine rather than imitating Jesus. As he says: 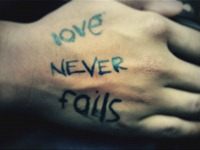 I want to pick a fight because I want someone else’s suffering to matter more to me. I want to slug it out where I can make a meaningful difference. God says He wants us to battle injustice, to look out for orphans and widows, to give sacrificially. And anyone who gets distracted with the minutiae of this point or that opinion is tagging out of the real skirmish.

Stymied there, we cynics may finally scoff, shrug our shoulders and attribute Bob’s vitality to personality – some people are just born that way. His story’s cool, but it’s not practical for everyone to live like that.

But here’s the thing: Bob’s obviously a pretty ordinary guy. He doesn’t have superpowers. He’s not fifty times smarter than everyone else (read the story about how he got in to Law School!). It’s clear from Love Does that he wasn’t “just born” adventurous and gregarious. He’s made a habit of saying Yes to whimsy and adventure, saying Yes to a life that’s bigger, more abundant than we imagine.

Bob’s an ordinary guy living an extraordinary life. His stories become an invitation to us, his ordinary readers, to step into that kind of life.

Love Does invites us to dream bigger. To imagine that God is doing something bigger than we can really get a good handle on. Despite my most cynical efforts, I found myself inspired to say Yes next time a crazy adventure presents itself. To put away my list of excuses and just do.

Bottom Line: Love Does by Bob Goff is an easy, challenging and inspiring read. If you’ve been looking for a breath of fresh air in your spirituality, this is it.

YOUR TURN: What did you think of Love Does? How has it inspired you?