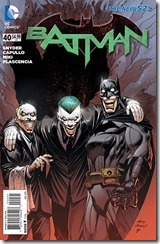 At the end of Batman #40, by Scott Snyder and Greg Capullo, Batman and the Joker have apparently been killed in a cave-in deep beneath Gotham. Snyder and Capullo confirm as much in several interviews published after the comic released – for now, Bruce Wayne is dead. They also confirmed that of course Bruce Wayne is coming back, that of course they’ve left a sort of back door in the story. This is how comics work, and no one should be surprised that DC allowed Bruce Wayne to be killed off with a plan for his return already in place.

What we need to ask is not “Did Bruce Wayne really die?”, but rather “Does this story of his death make a good story?”

Scott Snyder has been writing Batman as a horror comic since he took over the character in Detective Comics before DC’s New 52 reboot. (And if you haven’t read his storyline The Black Mirror, you must – it’s one of my favorite Batman stories of all time.) That matters a great deal to the kind of story Endgame is.

The way a story ends also reveals what kind of story it is – endings in which the heroes get what they want, or are rewarded in some way, are comedies. Stories in which the hero fails or is found to be insufficient are tragedies.

Endgame, which culminated in Batman 40, is a tragic horror story. Batman ultimately fails precisely because he is only human. 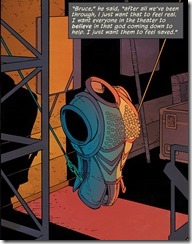 Endgame opens (in Batman 35) on the Gotham Royal Theater. The theater was built shortly after Zero Year, Snyder and Capullo’s take on Batman’s origin story.  Bruce Wayne had investigated the project when construction went over-budget and was told by the architect that the extra money paid for a special harness. The theater’s opening performance would be Euripides’ Orestes, a play that features Apollo descending deus ex machina at the end to resolve the play’s conflict. The architect tells Bruce that he wants the Gothamites to “feel saved”.

While the architect is clearly comparing Batman to Apollo, Snyder is warning us Endgame won’t end well. Orestes is a tragedy, and universally considered Euripides’ critique of Greek paganism. His gods are little better than humans themselves, and Apollo’s intervention at the end of the play is self-serving and dissatisfying for the audience.

Endgame Part 1 ends with the revelation that the Joker is back, having infected the Justice League and turned them against Batman. A Joker-ized Superman throws Batman through the Royal Theater and quite literally descends from the sky bringing not life, but death (until Batman beats him, of course).

The last time the Joker appeared, in Death of the Family, he claimed to act out of love for Batman. His return in Endgame is the Joker’s death notice for Batman. 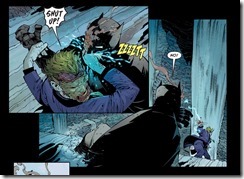 In Death of the Family, the Joker targeted Batman’s family – Alfred, Nightwing, Robin, Red Robin, Batgirl and Jason Todd. He claimed that they made Batman weak because they fed his humanity, made him soft and vulnerable. The Joker tried to orchestrate their deaths at Batman’s hands, only to be thwarted.

A major plot point of Death of the Family was whether or not the Joker knows Batman is Bruce Wayne. Bruce revealed that after one of their early fights, the Joker might have gotten into the Batcave. At the end of the story, Bruce discovers that the Joker had in fact breached the cave, but turned back before he could learn who Batman really was because the Joker did not want to know Batman’s human identity.

The Joker craves immortality. He wants to dance with the Batman forever. 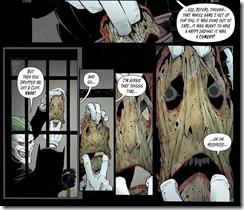 The Joker cannot allow Batman to be Bruce Wayne. To admit Batman has a human identity is to admit Batman is human. So he left the cave, insisting on a warped reality in which he and Batman have transcended human mortality. In their final confrontation in Death of the Family, Batman tells the Joker he knows his true identity and begins to whisper it into the Joker’s ear. Rather than be dragged out of his delusion, the Joker throws himself from a subterranean waterfall.

When he returns in Endgame, the Joker is furious that Batman refused his offer of immortality. He proclaims that “last time”, he came offering Batman a happy ending – immortality, freedom from Death. But this time, since he is the spurned lover, the Joker comes bringing only Death to Gotham, and to the Batman. 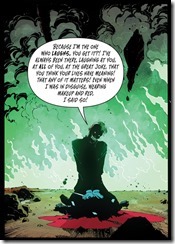 In keeping with his delusion, the Joker plants evidence that he is Gotham’s “Pale Man”, a near-immortal who has haunted Gotham throughout the ages. In playing the Pale Man, the Joker makes himself to be the avatar of Death. He taunts the citizens of Gotham:

In lots of places around the world, death is followed by celebration. It makes sense. We struggle and struggle in life, trying not to look at the end, to look at the now and find meaning, to find purpose… all for naught. Nothing. Ziiiip. Look it in the face and SMILE.

The Joker has made himself into the ultimate jester – the person who, in a royal court, tells the king what he doesn’t want to hear. The Joker tells us all that we are mortal. That death comes for all of us, that in the end, there is no god coming to save us, no higher purpose, no ultimate meaning.

For the Joker, life is one big joke, and the punchline isn’t terribly funny. 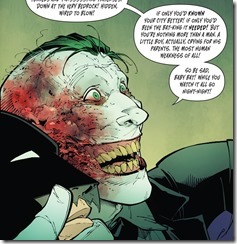 Death is, of course, what defines the Batman. He was born out of the death of Bruce Wayne’s parents, and in the years since that fateful night in Crime Alley, death is ultimately what Batman fights. Every crime is a fruit of chaos, of disorder, of Death.

Alfred is asked to explain the note Bruce left, his final words – or rather, final word, since the note was a single syllable. Alfred explains that in a world where Death steals meaning from everything, a world where we can’t rely on gods to descend from the sky and rescue us, the most truly heroic thing is to stand tall against the darkness of Death and laugh in the face of despair.

Not the laugh of insanity, the laugh that buckles under the lack of purpose. A laugh that insists life is beautiful because it is life. Alfred reflects,

Batman could live forever. he could escape. But he doesn’t. He dies, just like every one of us, even though he doesn’t have to. That’s his flaw.

But it’s also his greatest strength. The very thing that makes him immortal. He says, We’re in this together. He says, Live bravely in the time you have and smile at the void.

Batman’s last word is “Ha”, the tagline normally reserved for the Joker. But in refusing immortality, embracing humanity, Batman laughs in Death’s face and declares, “You have no power here.” In the end, that makes him heroic, not insane.

The parallels with Jesus’ incarnation are inescapable – Jesus too forsook the realm of God to become human. Jesus refused to leave us alone in our mortality, but took on flesh and walked to a cross, to inhabit the very pits of the God-forsaken. He invites us to follow his example, to embrace life, to laugh into the void.

Batman refuses the senslessness of Death, and so has – literally – the last laugh.

Jesus’ refusal to refuse mortality is the very faithfulness that led to his resurrection. We can only hope that Snyder and Capullo don’t wait too terribly long to reward Bruce Wayne with a resurrection of his own. After all, the world needs the Batman!

YOUR TURN: Did you enjoy ENDGAME? What do you make of Snyder’s take on Batman’s death?