Ridley Scott’s Prometheus has quickly become the most talked-about film of the Summer. It’s big, beautiful and asks some of the most basic human questions. But whether the film asks those questions well, and how satisfying the answers have been, has already ignited fierce debate.

Though I already reacted to the film here (spoiler: I loved it, flaws and all), and there’re tons of other great reviews out there, I wanted to highlight the film’s religious discussion. While its messages are (intentionally, I think) opaque, there’s plenty to talk about:

1. All Religions are (Basically) the Same

Prometheus certainly didn’t invent this idea; plenty of serious religion scholars have argued for Essentialism – that differences among religious traditions are cosmetic. And plenty other science fiction stories have imagined the essential religious core is of alien origin. (Chariots of the Gods, Stargate, Arthur C. Clarke, etc.)

In Prometheus, all “primitive” human religions – Sumarian, Mayan, Egyptian, Hawaiian, etc – were all visited by the Engineers. In fact, though it’s not in the film, according to Ridley Scott, even Jesus was an Engineer.

Essentialism is a compelling concept, and I wish it were true.

Then Muslims, Christians, various tribal groups, Hindus and everyone else could all get together and work through our cosmetic, cultural differences to find that we’re all one, big happy family, all ultimately worshipping the same deity.

But take any two religions seriously and learn quickly how different they are. The differences in how various religions construct meaning and make sense out of the world go far beyond the surface.

Essentialist claims like those made in Prometheus reflect a shallow, uncritical knowledge of how Religion works and of the various cultures and faiths assumed to be alike.

2. To be Human is to Resist Death

Human culture progresses as parents have children, grow old and die, to be replaced by their children. Death is possibly the great human universal. As Vickers warns Weyland:

A king has his reign. Then he dies. It’s inevitable. That is the natural order of things.

As I noted in my first review, Prometheus features two groups of people seeking answers to these basic human questions. While their motivations look different, they’re all motivated by the reality of Death.

When Vickers confronts Weyland concerning his presence on the mission, he responds:

If [the Engineers] made us then surely they can save us. Save me, anyway… From Death, of course.

Shaw, too, has spent her life plumbing the mysteries of Death. Both of Shaw’s parents died when Shaw was still young, and Shaw remains a strong Christian as well as an accomplished archaeologist.

Because Death is the one human universal, every person regardless of temperament must face at some point the inevitability of Death. Religions offer cultures systematic, social means to grieve and hope.

3. The Drive to Create is the Desire to Supplant our Maker(s) 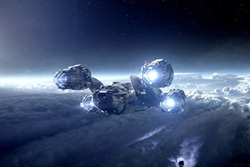 The Engineers created humanity (and allegedly lots of other races) in their own image – we’re just smaller and less translucent. And we – in the person of Peter Weyland – have created in our own image via David.

To create is to chase immortality.

Whether it’s art or technology or children, when we create we pass part of ourselves down to future generations. Creative activity opposes the reality of death. But Prometheus says there’s more to our desire to create:

Late in the film, Shaw asks David what’s going to happen to him after Weyland dies, after he’s not around to program and command David. David replies:

I suppose I’d be free. Doesn’t everyone want to see their parents dead?

This is the claim many atheists make: that humanity has outgrown belief in gods, that religious ritual and rules are outdated programming humanity doesn’t need anymore. If we’re to move forward as a race, it’s time to put aside old superstitions and grow up.

The idea that human scientific advancement can replace religion is an essential component of the Modernist Myth of Progress. And it’s really nothing more than the first sin of Pride in a new form. We can be our own gods. We can save ourselves. Same story, different day.

But religious faith is more than childish superstition. “Maturity” doesn’t imply abandoning or superseding our parents.

That is, in fact, a particularly Modernist version of the old tale. In most other cultures, adulthood doesn’t entail leaving home. Adulthood is full participation in the life of the home, and by extension, the community.

The biblical model of maturity is similar: we “grow up” spiritually not by abandoning God and our faith, but by participating fully in the work of kingdom building. We move from spiritual consuming to contribution.

The meaning in this myth closely parallels the biblical story of Eden: some other being – a talking snake – tempts humanity to acquire knowledge God didn’t want us to have (the experience of Good and Evil). We embrace this knowledge and it costs us our position: life in the Garden with God.

Truth has a price. Knowledge doesn’t come without Sacrifice. And that’s not always a good thing. 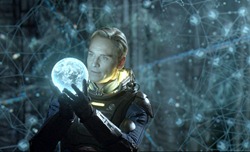 Prometheus offers a relational structure similar to Greek mythology: if we imagine the Engineers to be Titans (created first, by some older, unknowable Elder gods), then humans are the Greek Gods, children of the Titans who have a somewhat adversarial relationship to our makers – they did, apparently, try to destroy us, after all. Humans created our own children – in the person of David the android (who calls Vickers “Mum”, implying that he’s somehow the product of incest among his gods – so Greek!).

The quest for Truth/Immortality costs everyone on the mission.

David comes closest to achieving his quest – Weyland dies and the Engineers nearly destroy humanity, but David is nearly destroyed, rendered helpless. Shaw witnesses the death of her beloved, gives birth to an alien squid baby/proto-face-hugger and doesn’t get any answers. Everyone else dies.

Christianity recognizes that Truth costs as well. In addition to the initial Eden story, the witness of the New Testament is that to follow the Way of Jesus is to embrace the Death of our lives, of the natural Way of life.

Another typical sci-fi theme (Lovecraft, Reynolds) Prometheus draws on is the ineffability of the universe. Unlike the Star Trek and Star Wars universes, Prometheus presents a universe hostile to humanity. Whatever we share in common with the Engineers, their motivations (as the film presents them) are ultimately unknowable.

Christianity confesses that God is similarly unknowable, with a major caveat: the doctrine of Revelation. We believe though humanity cannot know or understand God, God has revealed Godself to humanity such that we can comprehend and relate to God. God’s incarnation in the person of Jesus is the ultimate embodiment of this knowable God.

The distinction is subtle, but very important: God is beyond us, utterly unknowable. But God makes Godself known to us such that we can have real, significant relationships with that God. (Check out this book and this book, and everything by Peter Rollins for more on this point.) 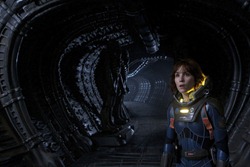 Though Prometheus barely explored this theme, I enjoyed watching a film whose main character experienced no conflict between her explicitly Christian faith and commitment to science. The film glosses over Shaw’s potential conflict with a pat phrase – “I choose to believe.”

I’d love to see this theme handled more explicitly and with greater respect for such a divisive, important theme in contemporary American discourse (though Scott’s a Brit, so maybe that’s why?). But I’ll take what little the film gave us. As Shaw observed, scientific answers (the Engineers made us) don’t answer religious questions (but who made them?). A religious person shouldn’t fear science. A scientific person shouldn’t feel threatened by religion.

Religion and science need not be antagonists. They should be partners.

So that’s my take on the themes in Prometheus. Convoluted. A frustrating lack of answers. But a wonderful plethora of questions we just don’t usually get from a summer blockbuster.

YOUR TURN: What themes in the film did you connect with? What did you agree or disagree with?