300 : Rise of an Empire is the brutal, bloody sequel to the 2006 surprise, hyper-masculine, special-effects-laden-gore-fest 300. The new film is a mixed bag. On the one hand, it feels very similar to 300, having been written by Frank Miller and produced by Zach Snyder (who directed 300).

The story is a bit muddled (I never thought I’d wish for more caption cards giving us dates!). But if you’re paying attention, it weaves around the first film surprisingly well. (I’m fully expecting a Directors’ Omi-cut weaving the two films together to be released next year). The acting is fine – it’s mostly yelling about “glory” and “freedom” and Eva Green making crazy eyes at everyone. Plus did anyone else notice that Themistocles looks a lot like pastor and leadership guru Andy Stanley?

But 300: Rise of an Empire also bears the same flaws as its predecessor: its inability to thoughtfully engage its central metaphor reduces it to a propaganda film at best and an unintentional parody at worst.

To put it bluntly: English provides us a finite number of ways to say “It’s cool to die for your country”. And the first 300 film pretty much exhausted all those possibilities. Not to be undone, Rise of an Empire is choked full of recruitment-poster-ready catchphrases like “Seize your glory!” and “Better to die on our feet than live on our knees” and the always-popular “Freedom!”

Frank Miller’s re-envisioning of Greek history turned first the Battle of Thermopylae and now the whole Greek battle against the Persian Empire into a proto-American Revolution. The Greeks are now champions of democracy, fighting (and succeeding) against insurmountable odds in the face of ruthless tyranny. The soldiers are incessantly reminded to fight “for their country” and “for Greece” despite a major plot point of the film being that Greece isn’t united.

The film centers around legacy – we’re told over and over that it’s better to die in the cause of freedom than live in tyranny. This is why the Athenians (and the Spartans from the first film) refuse to pursue any sort of peace with Persia. In the mythology of the film, Athenian democracy is the next stage of human political evolution (and Sparta is too… though not because they’re democratic. Maybe it’s because they’re extra-super-manly?).

The triumph of democracy and human reason are particularly American, post-Enlightenment values. They’re not givens. And they’re not worth dying for. 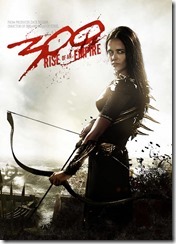 This is Rise of an Empire’s fatal flaw. The film explicitly rejects any sort of theism for a mythology based in reason and progress. But Reason and Progress make terrible gods – they’re not able to deliver us from Death. All the Greeks who died remain dead today, their sacrifices of questionable merit given that they’re to false gods.

And that’s what makes the film collapse under its own self-seriousness. We could’ve had a little thoughtful exploration of mortality. Probing at whether Nation and Reason are truly glorious enough to merit self-sacrifice. Whether the tide of history is truly on the side of the Greeks (or indeed, if there is even such thing as a Tide of History in the first place).

Instead we got gouts of blood, homoeroticism and uh… freedom? I guess?

Bottom Line: If you liked 300, you’ll probably enjoy Rise of the Empire well enough. But it’s as thoughtless as the original.

YOUR TURN: Did you enjoy Rise of the Empire?