As the world fell, each of us was, in our own way, broken. – Mad Max Rockatansky 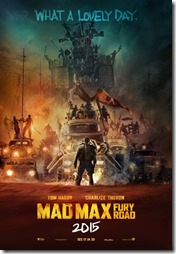 Be prepared – Mad Max: Fury Road is probably the movie of the summer. That’s a bold claim, especially only two weeks after Avengers: Age of Ultron smashed onto the scene. Fury Road has a few things going against it, most notably that it’s the fourth installment in a franchise whose last film – Mad Max Beyond Thunderdome – came out 30 years ago.

What will propel Fury Road to the top of the box-office is the simple fact that it’s a nearly perfect action film.

Fury Road is completely bananas. You will see things in this film you’ve never imagined before, vehicles and scenarios that are at best improbable. But the world is carefully constructed and internally consistent. You won’t be lost or confused. The characters are well-drawn and compelling. Miller used nearly all practical effects, so the film feels raw and real. And most importantly, the story is stellar. Miller deftly combines all of this to tell a gripping, compelling story with minimal dialogue and breathtaking action. The film really embodies the beauty of a master craftsman.

READ: 18 things to Know about the Making of George Miller’s Epic

Director George Miller has often referred to the chase as the “purest cinematic language”.

It makes sense – film (a relatively new medium for storytelling) is visual. The main difference between film and say a novel or song is that you see images. One of the cardinal rules of film (and also the most-broken) is “show, don’t tell.” This means filmmakers ought to avoid if at all possible using dialogue or text to tell us what’s happening in the plot or explain a character.

Think of Neo’s encounter with the Architect at the end of the second Matrix film – the Architect basically explains all the backstory to Neo. That’s exposition dump. (Game of Thrones infamously uses nudity to distract viewers from massive exposition dumps, earning such scenes the label “sexposition.) Or consider the outrage Star Wars fans expressed when George Lucas made Greedo shoot first in the Mos Eisley cantina scene in the first Star Wars film. It matters that when we first meet Han Solo, he’s the kind of guy who would shoot first. That piece of action informs us about the character, and changing it changes the character.

According to Miller, the less dialogue a scene uses to tell the story, the more purely cinematic it is.

A chase ought to embody pure cinema – a plot wholly shown, not told. Characters established by what they do, not how they describe themselves. In this regard, Fury Road is pure action cinema. Every word is a precision-guided weapon designed to execute a specific task. (I haven’t counted, but I’d be shocked if Max uses more than 50 words in the whole film).

As Miller himself describes his use of dialogue in the film:

“There’s no time for recreational talk. The dialogue has to be very purposeful, it carries important information. It’s about who is in this battle, or pageantry or religiosity in the dialogue of the tyrant, whether oratorical or sloganeering or the war cries of the war boys. When things do calm down there’s more intimate scenes between Nux (Nicholas Hoult) and Riley Keogh (Elvis Presley’s red-haired grand-daughter)—even those moments where Max reveals a bit of himself to another. Dialogue has its function, it’s very important to make it clear, people grab on quick, a little like water in the desert.” – George Miller, director

Simply put, Mad Max Fury Road is movie-making at its finest (and funnest). Grab a big bucket of popcorn and go see it.

Spoilers beyond this point for MAD MAX: Fury Road

So what is the film about? It’s about hope, and what makes us human. 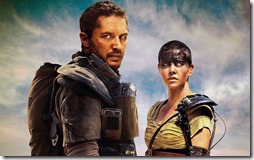 It’s worth remembering that the first Mad Max film basically invented the whole Post-Apocalyptic genre. Especially in the wake of Mad Max 2: The Road Warrior, which was released in 1981, it became almost a given that the future would be bleak and hopeless. George Miller was the first to use such settings to explore what makes us human. Author Julianna Baggot once said that apocalyptic stories are really about what survives the end of the world, and Fury Road is no different.

The film opens on Max, surviving in the wastelands that were once Australia, haunted by the specters of people he hasn’t been able to save. He’s overtaken by a gang of soldiers and carried to a giant compound run by an old man named Immortan Joe (an unrecognizable Hugh Keays-Byrne, who played the Toecutter in the original Mad Max). Immortan Joe wields godlike authority over the denizens of the surrounding wastes. They worship him because he has access to pure water, which he portions out only sparingly, warning his flock “Do not allow yourself to become addicted to water.” 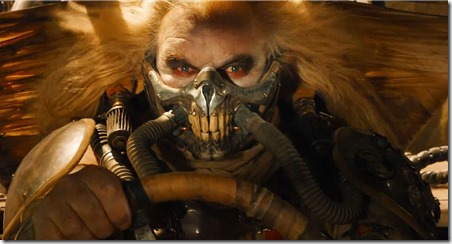 Immorten Joe maintains his power through his army of Warboys, who fight in hopes Joe will deem them worthy of dining with him in Valhalla. He lives at the top of an oasis, surrounded by life – both vegetation and human, in the form of Milk Mothers who are nursed all day to provide Immorten Joe with fresh milk.

Max is placed in a cage to be used as a Blood Bag for one of the Warboys – since they all seem to have radiation sickness, they prolong their lives through blood transfusions from captured people.

(I can’t overemphasize how astounding it is that all this exposition is communicated without a word of explanatory dialogue. It’s just astounding.)

The film is set in motion when one of Immorten Joe’s Imperators steals his 5 wives – all young women he uses as breeders. 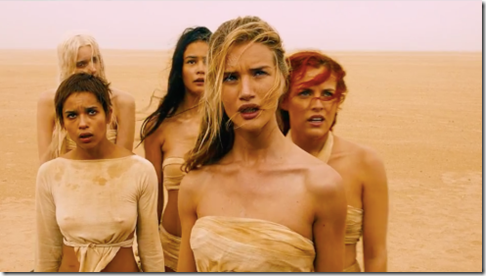 Much has already been made of the extent to which Fury Road is a feminist film. This isn’t an accident – Miller brought legendary feminist playwright and activist Eve Ensler to the set of the film to work with the cast and crew specifically because the MacGuffin of the film is sexually-exploited women. Immorten Joe and his coregents represent the very worst of patriarchy not only because they abuse women, but because everyone who is not them is, in their eyes, less than human. As Miller observes:

Everyone in the film is a commodity in one way or another. Max is a blood bag. The girls are breeders. The Warboys are cannon fodder. Everyone has his brand on them. – George Miller 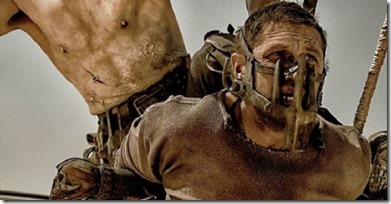 Feminism is often defined (somewhat tongue-in-cheek) as “the radical notion that women are people too.” Fury Road expertly demonstrates that patriarchy hurts everyone, not just women. Patriarchy will use whatever tools it must – religion, economics, violence – to maintain the power of the few at the top.

Imperator Furiosa (Charlize Theron in an already-classic role as Mad Max’s equal) seeks to flee Imperator Joe’s patriarchal power, to rescue these abused girls (who leave behind messages like “Women are not things.”). Her goal is to get them to safety in “the green place”, an Edenic Promised Land, a memory of her long-lost childhood, beyond the desert wastes.

The Exodus imagery is strong through the first two thirds of the film – Furiosa is a desperate Moses, fleeing through a Red Desert with Pharaoh’s terrifying army in hot pursuit (and poor Max dragged along for the ride). 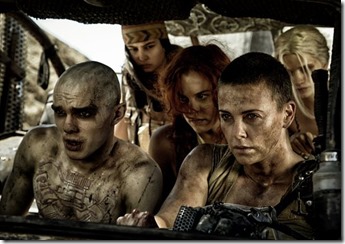 All that changes at the end of Act 2 when Furiosa and Max find what’s left of Furiosa’s people and learn there is no Promised Land – it’s been poisoned like everything else. They face a life in the wilderness, with no hope ahead of them.

In this moment, Max decides to quit running. He tells Furiosa and her people they have only one choice – to return to Immorten Joe’s compound and take Egypt while Pharaoh and his armies are out chasing them.

What follows is a stunning call to work against injustice, an embodiment of Dr. King’s famous dictum, “Injustice anywhere is a threat to justice everywhere.” The Immorten Joes of our world have ensconced themselves in the best places, doling out only as much autonomy and humanity as they need to maintain their power. Many of us, like Furiosa, are convinced we need to flee, to search for freedom elsewhere.

Fury Road is a call to pull the Pharaohs down from their thrones, to remember that these persons are not gods, but humans.

The film ends with a question:

Where must we go, we who search this wasteland in search of our better selves?

The film’s answer is that we must return to Egypt, not as slaves, but as liberators. We must band together and stand tall against oppression, against everyone and everything that tells us we are less than human. Only then may we learn who we truly are, and find true freedom, not in the wasteland, but in paradise.

MAD MAX: Fury Road is a masterfully crafted film that hits all the right notes. Combine Miller’s technical mastery of the craft with a timely, empowering message delivered with pitch-perfect cinematic storytelling, and you have the recipe for an instant classic. Here’s hoping the box office rewards what is sure to be this year’s smartest, most entertaining and flat out crazy film.

And can we talk about how awesome that portable soundtrack was? I need one of those.

BOTTOM LINE: MAD MAX: Fury Road is a near-perfect action film that calls us to fight for our humanity to be realized in a world that is just for all persons.

YOUR TURN: What did you think of MAD MAX: Fury Road?