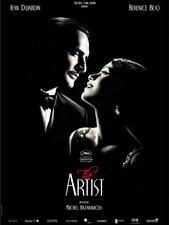 I was expecting to hate this movie. By the time I saw it, The Artist had received tons of buzz and done very well at the Golden Globes. I knew it was a silent film that paid homage to the Hollywood of yesteryear. So I was expecting a pandering tribute that film-industry insiders (and hipsters) would swoon over, but that would leave the rest of us scratching our heads and saying, “I don’t get it.”

Instead, I got a warm, creative piece of storytelling bursting with relevance because it uses the confines of its genre to transcend them. 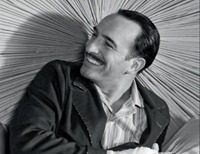 The Artist is set in Hollywood in the late 20s-early 30s. George Valentin (Jean Dujardin) is the biggest silent film actor of the day. He sort of accidentally helps aspiring actress Peppy Miller (Berenice Bejo) break into the industry. But George’s career ends when his studio decides to start making “talkies” – movies with sound. They oust George and use Peppy – among others – as the fresh, new faces of the new cinema. As Peppy’s career skyrockets, George’s goes into a tailspin. By the end of the film, George has lost everything while Peppy is America’s new darling.

Valentin’s fall stems from his stubborn refusal to change. The New is beneath him. In his own words, “I am an Artist!”

No matter what your passions, you know Valentin. He’s the music industry refusing to embrace the digital music revolution. He’s the business leader who treats social media as one more billboard. He’s church people who don’t want to give up hymns for choruses. He’s anyone who’s ever loved what they do, who’s been really, really good at it, then lost it when their industry changed. 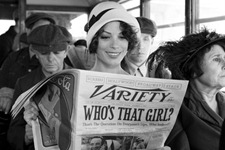 George’s talent was never the problem. It was his fear of the unknown. Introducing sound into a film was a major innovation. It fundamentally changed storytelling, changed what was demanded of an actor. George didn’t understand the changes, so out of his fear, he dismissed the New as beneath him. What he does is Art. The New is less… somehow

When we don’t understand change, when we fear change, we hide our fear by enshrining the Old as sacred and demonizing the New. 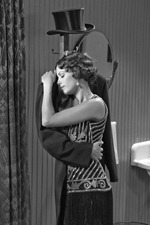 George finally concedes the value of Talkies, but that concession only deepens his depression. If the New really does have value, then he is simply out-of-date, old-fashioned. We see his despair in many older generations who feel the world has past them by, that they have nothing new to contribute.

Peppy ultimately rescues George. She loves him and feels indebted to him for getting her started. Peppy is the first to realize that silent films weren’t what made George Valentin great. And she helps George and the Studio to realize that as well.

George really is an artist. He has a natural charisma and charm that come through in anything he does. The first time we met him, he was entertaining a crowd in person, not on a screen. Peppy helps George to adapt his natural talents to a new medium. Just like that, this Artist has entered into the world of the talkies.

Institutions aren’t sacred. Everything changes. And the true artists can shine in any medium.

Director Michel Hazanavicius uses the limitations of a silent film to full effect in The Artist. The film is funny, tragic and inspiring. A couple of shots took my breath away. And in the end, this throwback to a bygone era actually does what it models. The Artist is a timeless plea to both young and old:

Change is inevitable, but it doesn’t have to be scary. To succeed, we need each other. The Young need the Old’s wisdom and guidance. The Old need the Young’s fresh eyes and innovation. We need to work together, because we’ll always be better as partners than as adversaries.

Bottom Line: The Artist is a masterpiece that showcases what is possible when generations work as partners instead of enemies. A surprise and treat.

YOUR TURN: What did you think of The Artist? Did you like the silent film format? What’s your take on the film’s message about change?