This post spoils everything through House of Cards Episode 30 (Season 3, Episode 4). Fair warning! 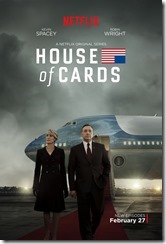 Who doesn’t love it when Frank Underwood talks to God? House of Cards is a fascinating Netflix original in part because it’s all about power. We love The West Wing because we get to view the American political system through Aaron Sorkin’s idealizing lens – we get to see how we wish it was. We watch House of Cards for an entirely different reason: it feels more like the Washington we see on the news.

And the king of this House of Cards is indisputably Frank Underwood. For two seasons – nearly 26 hours, we have watched him climb from House Whip to President of the United States, all through manipulation, intimidation and even murder if he must. Frank has shown himself utterly willing to do whatever it takes to acquire the Oval Office, and at the end of last season, he made it. The closing shot was him looming (classic power stance!) over the desk and rapping hard on the desktop twice – a clear sign it’s time to get down to business.

How many were as surprised as I was that Frank’s goal turned out – it seems so far – to be the good of the country?

The first few episodes of season three have treated us to the typical machinations and manipulations we’ve come to expect from Frank, but he has been doing much good in the office. Sure, Frank wants his America Works program to succeed so he can seek reelection, but Frank’s concern for his legacy is a legitimately better nation. He has a particular vision of the American Dream and he wants it realized. So with his dealings with Russia and – most importantly with regard to the American citizens killed in the drone strike ordered by former-president Walker.

Frank allows the Solicitor General to reveal that the US Government was in fact behind the drone strike that was in question, forcing her to take the legal defense that the collateral damage of US civilian deaths was tragic, but not illegal. Though Frank seems at ease with the defense, his meeting with the surviving victim of the strike, Mahmoud, reveals otherwise. In the face of Mahmoud’s physical and emotional pain, Frank wrestles with whether the drone strike – which effectively eliminated a terrorist target – was the “right call”.

For guidance, Frank goes to church in the middle of the night and meets with Bishop Charles Eddis. They debate justice and power, and Frank leaves with a bad taste in his mouth for the way of Jesus.

The episode opened with the Bishop presiding over a funeral in Arlington for three soldiers who died in Afghanistan. He referenced the story of Abraham sacrificing Isaac, and God stopping the sacrifice at the last moment. (And the conversation about appropriating the Abraham story and the language of ‘sacrifice’ for a military funeral is worth a whole separate post.)

Frank feels a tension between the God he heard about in the Bishop’s funeral sermon and the God he sees crucified before him in the sanctuary. He inquires of the Bishop:

Frank: I want to understand what justice is.

Bishop Eddis: There’s our justice, the kind men create. We base it on things like the 10 commandments. But those can be read a million different ways.

Bishop Eddis: Who’s to say? If we didn’t kill, others would kill instead of us. There’s a lot of killing in the Bible. King David was a warrior.

Frank: How do you reconcile that with the laws God gave Moses?

Bishop Eddis: Even those laws require interpretation. There are two laws we have to remember above all else. [gesturing to the crucifix] He tells us to love God and to love each other.

Frank: You can’t love the people you kill.

Bishop Eddis: You sure as hell can. And you have to love the people who’re trying to kill you. Jesus loved the Romans. ‘Father forgive them’, he said, ‘For they know not what they do.’

Frank: Why didn’t he fight? Why did he allow himself to be sacrificed?

Bishop Eddis: I ask myself that question a lot.

Frank: I understand the Old Testament god, whose power is absolute, who rules through fear. But… him…

Bishop Eddis: There’s no such thing as absolute power for us, except on the receiving end. Using fear will get you nowhere. It’s not your job to decide what’s just. It’s not your place to choose the version of God you like best. It’s not your duty to serve this country alone and it better not be your goal to simply serve yourself. You serve the Lord, and through him you serve others. Two rules: Love God, love each other. Period.

You weren’t chosen, Mr. President. [gestures again]. Only he was.

Putting aside the Bishop’s attempt to reconcile Just War theory with Jesus’ command to love our enemies and the false tension Frank observes between the Old Testament God and Jesus (both again worthy of their own posts!), their conversation about justice is telling: Frank has been considering a more loving approach to those who stand in his way.

Frank doesn’t understand Jesus’ call to give up power, to love those we perceive as enemies. To Frank, love is only weakness. 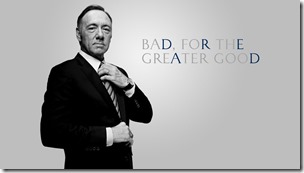 Frank’s most immediate threat to the White House is his Solicitor General Heather Dunbar, who uses his guidance on the drone strike case to mount the brilliant “tragic-but-just” defense. Frank rightly suspects Dunbar will use the case as a springboard to run for president in 2016.

Frank plans to bypass this by offering Dunbar a seat on the Supreme Court. When Justice Robert Jacobs tells Frank he’s reconsidered stepping down due to his Alzheimer’s diagnosis, Frank briefly considers “destroying” Jacobs and forcing him to resign. Instead, Frank opts for mercy (it can hardly even be called compassion, let alone love), only to find he’s been played – Dunbar and Jacobs are friends. Dunbar announces her candidacy and Underwood finds himself undermined.

Frank has acquired power through strength – manipulation, intimidation and violence. He cannot conceive of another kind of power.

The Bishop leaves Frank alone – ostensibly to pray, and Frank approaches the image of the crucified Jesus. He looks up to Jesus and, voice full of disdain, observes:

Love. That’s what you’re selling. Well I don’t buy it.

Frank spits up onto Jesus’ face. After a few moments of consideration, he pulls out a handkerchief to wipe the spit away, but when he touches the crucifix, it shifts, throwing Jesus to the floor. The porcelain figure shatters, and Jesus’ body lies literally broken at Frank’s feet.

The image is powerful: Frank has become the Roman soldiers, spitting on Jesus and breaking his body. Through his disdain, Frank has rejected the way of Jesus in favor of the way of Rome. Jesus has already announced his forgiveness of Frank, but Frank has (literally) spat in the face of that offer.

Frank has achieved his near objective – he is the President of the United States. He wields unparalleled power (though as the Bishop reminds him, it’s still not absolute). Frank came to the Church seeking to understand justice, to understand what makes something right.

The Bishop offered him the way of Jesus: Love God and love people. Even when those decisions get messy (as they must in a yet-unredeemed world), those who follow the way of Jesus must be guided by Love above all else, whether we be presidents or pastors or the poorest of the poor.

But Frank looked into the face of love and rejected it as weak and ineffective. We can expect to see Frank order more drone strikes. We can expect Frank to show no more mercy to those who oppose his will.

Probably not until the series has run its course. Until then, may we at least have plenty more Frank in Church scenes!

YOUR TURN: Can a President afford to walk the path of Jesus? Can a politician give away power and be effective?