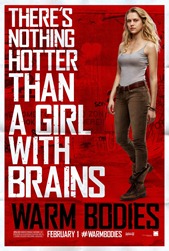 There’s a precarious period in any trend when we have to wonder if it’s on the decline. We’ve reached that moment with the Zombie craze. Every time a new project is announced, there are a few more eye-rolls than before. We all wonder: will this be the movie/book/tv-show that breaks the Zom-bubble? (Spoiler: It’ll be World War Z).

So it’s refreshing to meet a film like Warm Bodies, probably only the second ever Zom-Rom-Com after the now-classic Shaun of the Dead. Warm Bodies is a story of forbidden love (explicitly modeled after Romeo-and-Juliet… or should that be Romero-and-Juliet?) that uses the Zombie metaphor to demonstrate the power of love.

Plus, the posters are just hilarious and awesome. The marketing team deserves some sort of award. Can we work on that?

Warm Bodies is a perfect example of why we love monsters: because monster stories are really about us.

R (short for “Romeo”, get it?) is a zombie who can’t remember anything about his former life. Though R can’t talk, he inner-monologues like a champ, and he quickly endears himself to us. R is desperate for something more than the endless drudgery of his daily existence. And here’s where the film starts to work: from the beginning, we can see more of ourselves in the zombie population than we anticipated.

Check out the first four minutes of the film:

R soon meets Julie (Juliet, get it?!), a human whom he quickly gets to know by eating her boyfriend’s brains. This plot device is amazing because:

Once R and Julie are together, the film really takes off. We watch R slowly become more human and Julie slowly overcome her fear of the Other. And then, surprisingly, the burgeoning love between R and Julie  begins to transform R’s community as well.

Love literally brings the dead back to life. There’s something about Jesus somewhere in that, right?

In the end, Warm Bodies is a sweet, simple message that without love, we are all dead. True, honest love has the power to save not only us, but whole communities. We need love. Not just romantic love, but the love of friendship. The love of community. Love is what gives our lives meaning, what makes us more than mindless, shambling corpses. That’s the message we see in Warm Bodies, wrapped in a smart, fun and funny script.

Warm Bodies tells a sweet, thought-provoking love story that manages to enchant us without sacrificing any of the conventions of the monster. (Unlike, say, Twilight‘s sparkle-in-the-sun “vampires”.) So even if you don’t like zombie movies, you might want to check this one out. It’s really a lot of fun.

Bottom Line: Warm Bodies is a fresh entry in the Zombie craze. It’s got a lot of brains and a lot of heart, which makes it a fun film to devour.

YOUR TURN: Are you over the Zombie craze? Did you like Warm Bodies?