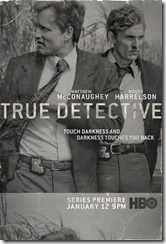 **Editor’s note: this article has been updated to reflect that the Carcosa mythology predates H. P. Lovecraft’s writings.**

Do you ever wonder if you’re a bad man?

No I don’t wonder, Marty.
The world needs bad men. We keep the other bad men fro the door.

The dust settles on the first season of what has already become a landmark of great television. I’m talking of course about Nick Pizolloto’s True Detective, starring Matthew McConaughey and Woody Harrelson. True Detective began making waves in its first episode – what seemed to be a gritty noir turned out to be a slow-burn horror story.

As the series unfolded, those suspicions were confirmed by references to the realm of Carcosa and its ruler the Yellow King – inventions of a Lovecraft-esque horror author whose mythology has been added to, revised and enhanced by dozens of subsequent authors. And now, it seems, Nick Pizzollato is adding the story of Marty Hart and Rustin Cohle.

It turns out True Detective is a story about a man staring into the Abyss and finding salvation.

That man is Rustin Cohle (though Marty Hart undergoes a journey of his own). When we first meet Rust, he’s a self-described philosophical Pessimist. In practical terms, that means that Rust is an atheist who doesn’t think the world is going anywhere, that life has any purpose. As he puts it to an incredulous Marty:

I think human consciousness is a tragic misstep in evolution. We became too self-aware. Nature created an aspect of nature separate from itself. We are creatures that should not exist by natural law… We are things that labor under the illusion of having a self, this secretion of sensory experience and feeling, programmed with total assurance that we are each somebody when in fact everybody’s nobody… I think the honorable thing for our species to do is deny our programming. Stop reproducing. Walk hand in hand into extinction. One last midnight. Brothers and sisters opting out of a raw deal.

When Marty wonders how a man with such a worldview could even climb out of bed in the morning, Rust admits:

I tell myself I bear witness. The real answer is that it’s obviously my programming, and I lack the constitution for suicide. 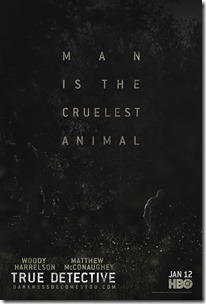 Rust hides inside his philosophy. It insulates him from a world he finds intolerable.

As the show progresses, Rust confesses that his journey into darkness began at the death of his daughter, Sophia (Greek for ‘Wisdom’) and the subsequent disintegration of his marriage. Rust’s Pessimism is a response to his encounter with the Abyss, another philosophical metaphor coined by Nietzsche and embraced by Nihilism.

The Abyss is the nothingness Nihilists claim to be at the heart of human existence. Having lost his child to an accident (facing the Death of Wisdom), Rust attempts to embrace the Abyss, to surrender himself to a meaningless universe. Rust seems to believe this is the only comfort he can find. The other option would be to accept that his daughter’s life was either unimportant to some sort of Grand Plan or a necessary sacrifice.

This is Rust the Pessimist: a man who claims that human life has no meaning, no purpose. But does he really believe that?

Though we get hints throughout the show that Rust cares a lot more than a person of his avowed persuasion should, one particular scene proves Rust a liar. In the interrogation of a mother who’s killed all three of her children, Rust calmly and coolly offers this horrific woman equally horrific advice:

The newspapers are gonna be tough on you and prison is very very hard on people who hurt kids… If you get the opportunity, you should kill yourself.

Here is a woman who fulfills Rust’s initial profile. She has – with all three of her children – resisted the urge to reproduce, killing them each in their cribs in turn. A woman who will now march into oblivion.

And yet Rust does not praise her. Rust does not idolize her. He condemns her (and rightfully so!). In Rust’s condemnation, he proves that despite all his protestations to the contrary, human life still has significant essential value.

True Detective slowly and inexorably reveals that Rust is not in fact true to his words. He cannot escape the basic regard for humanity that drives him to excel as a detective. Whatever he says, his actions prove that – at least for him – life does in fact have ultimate meaning.

Only when we realize that Rust isn’t true does it become clear that True Detective’s central journey is Rust’s: his striving to find meaning in the face of the Abyss.

In the end, Rust’s journey becomes a secularized meditation on the Jesus story. In other words, Rust is saved by Jesus’ crucifixion.

In that episode 1 conversation, Mary inquires after the crucifix Rust has displayed on his wall – the one decoration in an otherwise stark apartment seems especially odd for a professed non-Christian. Rust tells Marty the cross is for meditation:

I contemplate the moment in the garden. The idea of allowing your own crucifixion. – Rustin Cohle

Rust is clearly no Christian – his visit to Rev. Theriot’s tent revival reveals his total disdain for all kinds of belief in God. And yet, Rust embodies Jesus in so many ways. He shows an uncanny ability to empathize with humanity, lending him a near-unparalleled skill in the interrogation room. And he sacrifices his whole life to the pursuit of justice for the Yellow King – this killer of women and children. Rust has abandoned everything in his search for this killer.

But it’s not until his final moments in Errol’s catacombs that, like Jesus wonder why God had forsaken him, Rust finally, truly faces the Abyss he thought he’d embraced.

All of the cross imagery that’s been haunting Rust throughout the series culminates on Errol’s knife, when Rust’s quest comes to an end and he embraces the void.

Calling back to his meditation on Christ’s Cross, Rust tells Marty (reflecting back on that moment from the hospital) that he sensed something in the darkness of Death, a darkness deeper than the Abyss of nothingness. A darkness in which Rust could sense pure Love.

Rust surrenders himself to this Love, and on the other side of this death and resurrection, he is transformed. In the show’s final scene, just before this odd couple exits stage right, Rust makes one last observation that proves he’s no pessimist:

I tell you, Marty, I’ve been up in that room looking out those windows every night here and just thinking It’s just one story. The oldest. – Rust
What’s that? – Marty
Light versus dark.
Well, I know we ain’t in Alaska, but appears to me that the dark has a lot more territory…
You know, you’re looking at it wrong, the sky thing.
How is that?
Well, once, there was only dark. If you ask me, the light’s winning.

Rust’s journey isn’t quite Christian. The Loving Darkness Rust describes sounds more like Buddhism’s Nirvana than the Triune God revealed in the person of Jesus. But in allowing himself to be crucified – in giving his life for the good of those who can’t save themselves – Rust finds the answer to the Abyss. And this is a fundamentally Christian truth – acknowledged or not.

Because we bear the image of God, the value of human life is intrinsic and undeniable. To fight for light, to push back the darkness is heroic. It’s what makes a real detective.

BOTTOM LINE: True Detective affirms life in the face of death, finding hope in every act of resisting darkness, defying the Abyss.

YOUR TURN: What did you think of True Detective? Did you find Rust’s journey compelling?