Spoilers for Game of Thrones Season 04 Episode 08, “The Mountain and the Viper” 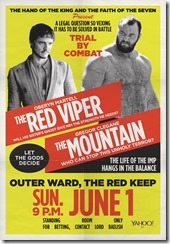 Yet again, the internet exploded in the wake of an episode of Game of Thrones. This week, it was in reaction to the death of Oberyn Martell at the hands (literally) of The Mountain, a.k.a. Gregor Clegane, an ominous, mostly off-screen presence. Despite Oberyn being a relatively new character to the show – he debuted only eight episodes ago and has surely had less than 45 minutes of total screen time, Oberyn’s death rocked fans of the show. Even for those (like me) who’ve read the books and knew what was coming, the trial-by-combat where Oberyn met his death was traumatic – moreso even than other shocking events like Ned Stark’s beheadding or the Red Wedding.

Oberyn Martell’s death was so affective because he embodied the ideal of civilization, and was overcome by savagery. 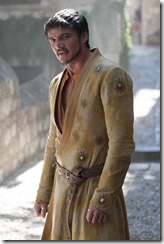 Oberyn Martell is the second son of the prince of Dorn. Dorn is the last of the seven kingdoms, the only of the seven Ares didn’t conquer with his dragons (they joined his united monarchy willingly). The other six kingdoms look down their noses at the Dornish, considering them uncultured and dirty – in Oberyn’s first episode, we’re treated to some lewd jokes about the Dornish that involve bestiality.

But Oberyn is far from a savage – even a noble one. Oberyn is a world traveler. He’s cultured and refined. He has – in the world of the show – progressive politics. (Whatever your personal take on homosexuality, the show clearly regards characters who embrace it – like Oberyn, Margary and Lady Olenna – to be more intelligent and forward-thinking than those in the show who find it “unnatural”.) Oberyn is usually the smartest person in the room, clearly an intellectual equal to Tyrion and Tywin. Oberyn out-thinks and out-talks everyone.

Oberyn’s fatal flaw is his quest for revenge – on the Mountain and on Tywin Lannister, who commands Gregor. In the world of Westeros, as in our world, vengeance is an uncivilized motivation. 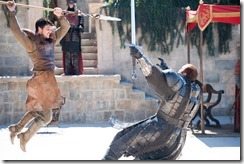 The matchup between the Mountain and the Viper (Oberyn’s nickname) seems doomed from the outset. The Mountain is a towering figure whose strength seems indomitable. But then the fight begins and the tables quickly turn. Oberyn leaps and spins around the arena, his long spear piercing the Mountain again and again, while Oberyn stays out of reach.

The fight is as much a contest between brutality and civility as it is about the fate of Tyrion Lannister. The Mountain is the embodiment of humanity’s animal nature. He’s huge, strong and barely speaks. He has a giant sword and lumbers around the arena swinging, kicking and punching, demonstrating little real technique – just brute strength.

Oberyn, on the other hand, is everything we’d imagined he might be and more. We’d heard rumors of his fighting prowess, but we see the embodiment of human civilization: Oberyn has clearly spent hours upon hours training his body, making himself its master. His technique is not only flawless, it’s beautiful.

Oberyn’s civilization enables him to overcome the Mountain’s fearsome animalistic barbarism. But as Oberyn’s hunger for vengeance grows, his humanity fades away, leaving him vulnerable.

You killed her children!

Oberyn demands a confession from the Mountain, but as the battle progresses, the Mountain remains silent. Oberyn inflicts more and more pain, and his rage grows. The anger and pain he’s nurtured for more than a decade bursts forth as he begins to scream his mantra.

But as Oberyn’s vengeance grows, his humanity – in form of his civility – disappears. He stalks around the arena, shouting, flinging accusations. And finally, he stands over the Mountain, taking his eye off his opponent to accuse Tywin Lannister.

Oberyn’s vengeance reduces him from man to animal. And in a fight between animals, no one can win against the Mountain.

I can’t imagine a more brutal death than Oberyn’s (though granted I haven’t tried very hard). He is tripped. With one blow, the Mountain breaks his jaw, scattering his teeth. And then the Mountain climbs atop Oberyn, plunges his thumbs into Oberyn’s eyes and crushes his skull with gauntleted hands.

Ned Stark was beheaded. For all the injustice behind his death, beheading has been established in Westeros as a noble death. Even at the Red Wedding, Rob and Cat have their throats slit. (Rob is later beheaded and paraded around with his direwolf head sewn to his body, but we don’t watch any of this happen.)

Ned’s death and the Red Wedding are arguably the only in the story nearly as traumatic as Oberyn’s. But both Ned and Rob are victims of politicking. They die because they’re not able to play the Game of Thrones as well as their adversaries and they’re quite simply out-maneuvered. They’re victims of their own limitations as much as the machinations of Cerci, Tywin or Walder Frey. As odd as it sounds, Ned and Rob are the victims of civilization.

In Oberyn’s death, humanity is stripped away and he faces the consequences of his vengeance.

This is what makes Oberyn’s death so tragic: we see how completely revenge dehumanizes us. We see that when we choose not to turn from the path of vengeance, it ends only in death for us (though not usually embodied in a hulking brute of a man).

We believe in Oberyn’s cause. We feel his quest for vengeance is righteous. We’ve seen repeatedly that Westros is not a just place, that the righteous cannot hope to find a champion in any corner of the Seven Kingdoms (indeed, that such champions end up headless). Oberyn fights for Tyrion (whose cause we know to be just) and for Elia and her children.

But justice is fundamentally about flourishing, about the affirmation of humanity, the setting-right of the world. And Oberyn’s lust for vengeance stripped this away from him. He was wholly civilized but for this one vice.

And in Westeros, as in our world, one vice is enough to kill us when we feed it, nurture it and surrender to it.

Tyrion’s trial was the Fall of Oberyn Martell. His death haunts us because it’s a picture of the human condition. We have hope that we might be shrewder than Ned Stark, more principled and cautious than Rob. But who can escape from their vices? We’ve learned by now that no amount of civilizing overcomes our animal nature.

What a wretched man I am! Who can save me from this body of death?

His answers is my answer, and it’s the reason I follow Jesus:

Thank God! The answer is in Jesus Christ our Lord.

BOTTOM LINE: Oberyn’s death cuts us to the core because we feel his need for vengeance but also how it renders us less than fully human.

YOUR TURN: What did you think of the Trial? What has been the most upsetting death in Game of Thrones for you?