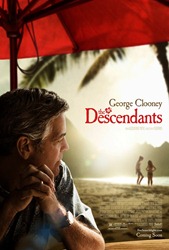 Starring a pitch-perfect George Clooney and directed by About Schmidt‘s Alexander Payne, The Descendants is a bittersweet meditation on the high cost of materialism. Matt King (Clooney) is a middle-aged real estate lawyer whose wife Elizabeth slowly dies after a boating accident rendered comatose. Meanwhile, Matt is also in the final stages of negotiating the real estate deal of a lifetime. Matt is the descendant of King Kamehameha, and is the sole executor of the King family’s last inheritance: 25,000 virgin acres on the island of Kaua’i. If Matt sells the land to developers, his family will make hundreds of millions of dollars.

Matt’s easy decision is derailed by his wife’s accident. This pause offers a critique of our Materialist culture and the legacy of Colonialism. 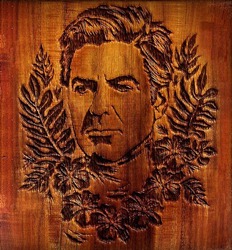 Matt’s family is a wreck – he calls himself the “back-up parent”, and his relationship with his daughters reflects that. He learns early on – from his older daughter, Alex, that his wife was cheating on him.

Matt realizes not only that he has no one to blame but himself for the state of his family, but that it’s too late to change anything.

Elizabeth’s broken, dying body – the remains of a broken and neglected marriage – are an incarnation of the islands of Hawaii. Few places embody the tensions of Colonialism as profoundly as Hawaii, whose native people and lush, tropical lands have been conquered, sold and reinvented for the sake of the dollar.

We’ve convinced ourselves that Paradise can be bought if we just make enough money, and few places reflect this as starkly as Hawaii.

Matt realizes that he’s been a poor steward of everything he’s inherited from his ancestors. That what he’s passing on to his daughters is a love for money above those less tangible but more real qualities like Love and Beauty. And so Matt chooses not to sell the land, to fight for it instead.

Matt’s final moments alone with Elizabeth are bittersweet. Leaning over her broken body, kissing her gently, he whispers for only her to hear:

Matt realizes that the Past is gone and unchangeable. His choices have real consequences and no matter how much he wishes it were otherwise, he cannot undo the damage that’s been done. 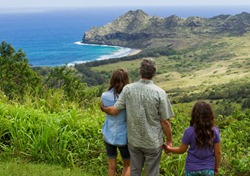 The Descendants is a critique of the American Dream as it’s played out in our day-to-day lives. We see what happens to a family whose patriarch puts the pursuit of wealth and comfort above everything else. And the critique works because Matt King is not an awful father. He’s a decent, likeable guy who got distracted by all the wrong things.

The film is also a more-subtle critique of American colonialism. Without preaching, The Descendants makes us feel the tension embodied in the Hawaiian people. Matt himself is the descendant of a marriage between an American colonist and a Hawaiian princess. The film recognizes that we can’t go back, but asks if we have to keep moving forward the same way we always have. 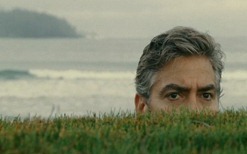 And in that, The Descendants is a morality tale for all of us. At both the individual and cultural levels, we have chosen to pursue wrong things, to put something false at the center of our world. (And for many of us, just like Matt King, that something is Wealth.) When we pursue the wrong things, our lives reflect that – our families and our world. And the damage is usually irreparable. 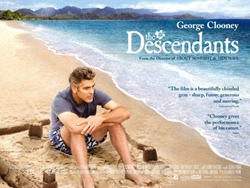 The film ends with Matt and his daughters sitting on the couch, watching March of the Penguins. Morgan Freeman tells us that Antarctica used to be a tropical paradise, teeming with life. But even now that it’s changed into a cold, desolate wasteland, life springs up, defiant and hopeful.

In the midst of his desolation, Matt too learned there’s no better time than now to start fighting for what really matters. To be better.  To leave a better legacy for those who come after us.

Bottom Line: The Descendants is a brutal, beautiful film about the consequences of our choices and the ever-present promise of hope. It’s medicine for your soul.

YOUR TURN: What did you think of The Descendants?