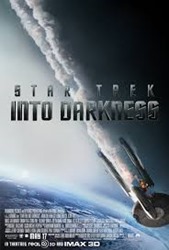 If you want to discuss Star Trek Into Darkness, the newest film from J. J. Abrams, we’re going to have to talk about two different films. The first we can do without spoilers:

There will always be those who seek to do us harm. But in seeking to keep ourselves safe, we risk awakening the same darkness within ourselves.
— James T. Kirk

Star Trek Into Darkness takes us back toward the ideals of the Stark Trek we Trekkies have all known and loved.

In the wake of Nero’s attacks in Star Trek, we find a Federation becoming dark and militaristic. A dangerous terrorist – John Harrison – turns out to be a pawn used by the Federation to create ever-more-advanced weapons.

Fear of both the unknown and the ever-aggressive Klingon Empire stand in as a (somewhat heavy-handed) metaphor for terrorists, and by the end of the film, we’re left to wonder who the true enemy was. What’s not in doubt is that Kirk and crew are the heroes. Their quests to save their “families” have transformed both Harrison and the Federation – in the person of Admiral Marcus – into monsters. Kirk, embodying the crew-as-family ethos that has always made Star Trek a successful franchise, shows us how to save your family without trekking into the darkness. But we can’t talk about that until spoilers.

The larger story is woven skillfully around some unparalleled set-pieces and space battles. The special effects serve to heighten the stakes much more effectively than the plot, which has some fairly silly holes in retrospect. Not to mention some very problematic takes on female characters.

In short, Star Trek Into Darkness is a great-but-not-perfect summer blockbuster. But what about the rest of the film?

One of the biggest mysteries of the summer was fated to be the mystery of Star Trek‘s newest villain, played by Benedict Cumberbatch. Since the second of the original Trek films – The Wrath of Khan – was also arguably the best of the Trek films, everyone wondered if Cumberbatch would be Khan in Abrams’ revised Trek timeline. Despite many loud protests to the contrary, it turns out that “John Harrison” was in fact a fiction and Cumberbatch, despite looking nothing like Ricardo Montalban, is the 21st-century, genetically-engineered terrorist Khan Noonien-Singh.

The reaction has been loud and varied (my personal favorite piece by Matt Singer over at Criticwire is well-worth your time). While I initially worried that essentially reimagining Wrath of Khan would render Into Darkness impenetrable, fan reaction has proved otherwise. Despite a few problems, the film largely succeeds as a sequel to the 2009 Star Trek.

Does Into Darkness succeed as a reimagining of the Khan story?

First, Into Darkness isn’t exactly a remake of Star Trek II. In Abrams’ reset timeline, Into Darkness is more properly a reimagining of the original Star Trek episode “Space Seed”, which features Khan and his crew’s first appearance. Kirk and crew strand his genocidal crew on an uninhabited planet. That episode set the stage for Khan’s wrath, as the title of the sequel film implies. Thus Into Darkness must reintroduce Khan, and when we meet him, he has no knowledge of or vendetta against Kirk.

Of course that all changes by the end of the film. Kirk dies, Spock surrenders to his too-powerful Vulcan emotions and Khan ends up on ice, ready to return with plenty of wrath.

And it’s Into Darkness‘ third act that really earns its reimagining. Into Darkness reinterprets the powerful, emotional climax of Wrath of Khan to tell a significantly different story.

Wrath of Khan was about the inevitability of mortality. It opened with the unwinnable Kobayashi Maru scenario and Kirk worrying about growing old on his birthday. It ended with the Kirk facing (Spock’s) death, the ultimate unwinnable scenario.

Into Darkness is about what it really means to be a father leader. Kirk, instead of Spock, offers up his life for his family crew, choosing to take the violence upon himself rather than become the darkness he fights.

Kirk learns that leadership comes with real danger: power and fear can cost more than your life. If you’re not careful, they can cost your soul. Kirk rejects revenge and fear as immature responses to danger and pain. And he becomes the leader we all know he’s destined to be.

Ultimately, Into Darkness uses its source material – both “Space Seed” and Wrath of Khan – to tell a new story that fits into Abrams’ rebooted, reimagined universe. To echo Matt Singer, I do hope that the franchise now feels free to boldly go where no one has gone before, but I enjoyed this retread quite a lot.

Bottom Line: Star Trek Into Darkness is a great standalone blockbuster, but it’s even better if you watch Wrath of Khan first!

YOUR TURN: What did you think of Star Trek Into Darkness? How did it compare to Wrath of Khan?