He’s not a person anymore. He stopped being a person when he took our daughters. – Keller Dover 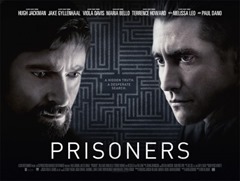 Prisoners is an outstanding thriller, well-acted, carefully directed and horrifying only because of the reflection we see in the mirror we’re shown.

In telling the story of two families whose young daughters go missing, Prisoners becomes a meditation on the nature of Evil, of how insidiously good persons are trapped into dehumanizing themselves for ostensibly good reasons.

Fair warning: spoilers for Prisoners after this point!

Prisoners opens with Keller Dover (Hugh Jackman) reciting the Lord’s Prayer as he and his son sight a doe in the woods. This film clearly wants to talk about God. Keller’s faith is never far from the surface as he hunts desperately for his lost daughter and her best friend.

When the dust settles, we learn that Holly Jones (Melissa Leo) and her deceased husband have been waging a “war on God” for years. Because they lost their son to cancer, they now steal other people’s children and murder them. She tells Keller that they specifically target people like him:

Good people like you, who quit being good. You become demons.

Holly’s plan mirrors Satan’s war on God in the book of Revelation.

Her strategy for creating demons out of good persons, and the terrible and all-too-believable realization of her plan in the lives of Kellar and Franklin (Terrance Howard), illustrate how we can resist those same temptations in our own lives.

Satan is introduced in chapter 12 of Revelation as a giant dragon intent to destroy Jesus. His war in Heaven is unsuccessful, and at Jesus’ ascension, Satan is cast out of Heaven. Chapter 12 ends with Satan furious and committing himself to making war on the rest of God’s children (which is those who follow Jesus).

But Revelation has already established that Jesus is unconquerable, and that those who remain faithful to him will be delivered through the power of his resurrection. In other words: Satan can’t actually hurt the church. The worst the powers can do is kill us, and Jesus has already conquered death.

If Christians need not fear Death, how does Satan wage his war?

By convincing Christians it’s in our best interest to compromise with the powers, to surrender our faithful witness to Jesus’ power in favor of a more comfortable or convenient life.

Prisoners gives that rather abstract idea flesh and bones. Holly is Satan, consumed by rage and dedicated to hurting God however she can. So she targets those who love God, those who are good, like Keller and his family. And she hurts them. Because she knows that pain and fear are the most powerful weapons against love.

And she’s right: out of fear, out of desperation, Keller kidnaps Alex (Paul Dano), himself a tragic victim of the Jones’ unholy crusade. He allows his own pain to justify the pain he inflicts on Alex, becoming the very monster he suspects Alex of being: a man who uses his power to hurt children.

None of Keller’s efforts accomplish good.

At every step, his actions impede and distract Loki’s (Jake Gyllenhaal) investigation. Not only does he become the very thing he hates, but he actively hinders the good powers working to save his family. Despite his faith, Keller allows his fear and pain to corrupt him. In the end, only his near-literal death and burial provide us hope that he could be resurrected.

Our culture is so saturated with fear we’d have an easier time listing where Prisoners doesn’t impact our lives. Whether it’s the war on terror, our political division or even how we choose to raise our children, we’re beset by doom-sayers prophesying a falling sky.

Some dangers are real. Some are surely imagined. In either case, Prisoners reminds us of Jesus’ words:

What does it profit a man to gain the whole world if it costs him his soul?

Compromise is our deadliest enemy We’d do well to keep in mind what Keller told us at the beginning of the film: only God can deliver us from evil. For the kingdom, power and glory belong to God and God alone, forever and ever.

Bottom Line: Prisoners isn’t just a great thriller. It’s a powerful spiritual fable that will challenge you to examine where your own loyalties lie.

YOUR TURN: Did you enjoy Prisoners? What did you make of the spiritual themes?