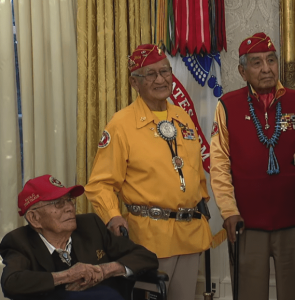 Today, we have with us three of the thirteen surviving Navajo Code Talkers of World War II. First, we have Fleming Begaye. Fleming Begaye is 97 years old, the oldest veteran of World War II. He survived the Battle of Tarawa. His landing craft was blown up and he literally had to swim to the beach to survive. Also, on Saipan, he also landed on Tinian where he got shot up real badly, survived one year in naval hospital.

Also, as if Marine Corps was not enough, he enlisted to be United States Army, and served in the Korean War. Survived that awful battle at Chosin.

Navajo Code Talkers, in the early part of World War II, the enemy was breaking every military code that was being used in the Pacific. This created a huge problem for strategizing against the enemy. Eventually, a suggestion was made in early 1942 — February ’42, essentially — to use Navajo language as a code.

The Marine Corps recruited 29 young Navajos, not telling them what they are being recruited for, because this was a top-secret operation. They were just asked, “Do you want to join the Marines? You want to fight the enemy? Come join the Marines.” So they volunteered.

Twenty-nine young Navajos joined the Marines in 1942, after going through boot camp, passed boot camp with flying colors; combat training — the same thing. Then entered the Marine Corps Communication School — passed that. Then they were separated from all the rest of the Marines, took them to a top-secret location just east of San Diego — Camp Elliott. That’s where they created a military code to be used in the Pacific.

On August 7, 1942 — 75 years ago — 1st Marine Division hit the beaches of Guadalcanal with 15 Navajo Code Talkers. This was the first battle where the Navajo code was to be tested in actual battle to test to see how our memory would be under heavy enemy fire. Well, three weeks after the landing, General Van De Griff, Commander of the 1st Marine Division, sent word back to United States saying, this Navajo code is terrific. The enemy never understood it; he said, we don’t understand it either, but it works. Send us some more Navajos.

Boot camp, combat training, communication schools. Then we all get separated, go to that special top-secret Navajo code school to learn to code. Initially, 260 code words, all subject to memory only. Eventually, by the time the war ended, 1945, there were 400 of us that went to war. And also, our code words grew to 600 code words, subject to memory only. In every battle two communication networks were established: Navajo communication network for all top-secret, confidential messages; the second network, English network, for all other messages.

In every battle — from the frontline, beach command post, command ship, all other ships — Code Talkers were used. On the island of Iwo, Major Connor said, the first 48 hours of battle, over 800 messages were sent by the 5th Marine Division, only. The first 48 hours, over 800 messages. Major Connor also said: Without Navajo, Marines would never have taken the island of Iwo Jima. (Applause.)

Why? Because what we did truly represents who we are as Americans. America, we know, is composed of diverse community. We have different languages, different skills, different talents, and different religion. But when our way of life is threatened, like the freedom and liberty that we all cherish, we come together as one. And when we come together as one, we are invincible. We cannot be defeated. That’s why we need this national Navajo Code Talker Museum so that our children, the future generation, can go through that museum and learn why America is so strong.

Thank you very much for listening.