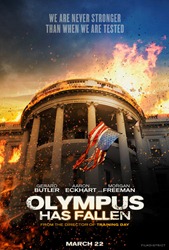 Olympus Has Fallen took me off-guard. Studios typically reserve the first quarter of the year for movies they don’t think will make much money (because they’re not very good), so I went in hoping to be mildly entertained (like I was in Dead Man Down). But I got more than I was expecting, and I mean that in the best way.

The plot is fairly straight-forward: Butler plays Mike Banning, a disgraced-but-awesome Secret Service agent who ends up alone in the White House after a North Korean terrorist cell takes it over and holds the President hostage. If you think Die Hard in the White House, you won’t be terribly far off.

The action is good, the plot as believable as possible given the set-up and the script and characters are actually pretty great. But what makes Olympus Has Fallen really stand out is what’s going on beneath the surface.

Olympus Has Fallen uses Greek mythology to point out America’s hubris on the world stage.

The White House is code-named Olympus, home of the Greek gods. From here, America gazes over the world, ruling and indulging in its every desire. Kang, the terrorist leader, repeatedly berates President Asher for America’s crimes, its self-indulgent foreign policies. When Asher asks the American traitor Forbes how much a soul costs these days, Forbes points out his hypocrisy. An American president has sold his soul to corporations and party politics to get his position. Is he really any different?

Kang’s organization carries out their attack on Olympus using exclusively American weapons. In addition to planes and guns, they hijack the Hydra, an experimental anti-aircraft weapon, and the Cerberus, the secret key to America’s nuclear superiority.

The terrorists use America’s weapons against itself. That these weapons bear the names of mythological beasts isn’t an accident.

In our hubris, we’ve created the weapons of our own destruction.

Kang shows America that we are not gods. Despite our aspirations, we are not powerful enough to recreate the world in our own image. Olympus Has Fallen demonstrates – much as 9/11 and the ensuing wars in the Middle East should have shown us – that we ought to walk more humbly on the world stage.

Unfortunately, neither Asher nor America as a whole chooses to learn from the attack. After Banning has killed all the terrorists and rescued President Asher, the President closes the film by reassuring the country. He recognizes that the terrorist attack wasn’t just about money; it was a statement about America’s hubris.

But in his speech, Asher assures the terrified nation that we won’t change our lifestyles, our foreign policy or our hubris. His speech made it clear that we’d done nothing wrong. We are victims only, with no reason to repent, to change. I couldn’t help but think of Bush’s words after 9/11 or Obama’s first inaugural address.

As a nation, we seem incapable of honest self-examination. We seem unable to admit that our consumption is out of control. And we’re obviously unwilling to change.

This is the heart of hubris. Only God is perfect. Only God need not change.

We are not gods. We are humans who share this planet with other humans in other nations. And so long as we continue to sow the violence of trying to play God in the world, we will reap the consequences.

Of course our sins don’t condone or excuse terrorist actions. But we cannot be surprised when our violence on the world stage is met with violent response. Rather than scratch our heads and assume they must ‘hate our freedom’, we ought to take a long, hard look at ourselves. We need to get the 2×4 out of our own eye before we go hunting splinter cells around the globe.

Bottom Line: Olympus Has Fallen paints a clear picture of the dangers of American Exceptionalism. Don’t miss it for the action.

YOUR TURN: What did you think of Olympus Has Fallen? Where do you see American Exceptionalism?