NorvilleRogers.com is proud to welcome Rabbi Eliyahu Fink as our guest blogger today. Listen to Rabbi Fink discuss the NOAH film with the StoryMen here and here.

The most ludicrous claim about the NOAH movie is probably the attempt to delegitimize the film as a resurrection of Gnosticism. This claim requires willful ignorance, immense creativity, and an overdose of hubris to even enter one’s mind, let alone take the fleeting thought seriously. But putting it to paper and arguing that people who don’t see it are “unable to identify a Gnostic subversion of the Bible” is a superb example of what might be a hallucinatory obsession.

Both are versions of religious mysticism, but that is where almost all comparisons end. In historical terms, Gnosticism shares a few ideas with proto-Kabbalah and was developed much earlier. Although Jewish mysticism has 2000 year old roots, the golden era of Kabbalah was the 16th century, over 1500 years after Gnosticism took hold in the early days of Christianity.

At the core of Gnosticism is a version of deity that is very different from the ideas about God in Judaism, Christianity, and Islam, the classic monotheistic religions. Gnosticism holds that there is a perfect deity that is the source of everything. But a flawed sub-deity created the world and all evil exists because of the sub-deity. There is a strong emphasis on personal spiritual experience and there is a robust tradition of asceticism as well.

Kabbalah shares nothing with Gnosticism in those areas. Further, the structure of Kabbalah is completely different.

God is the same ol’ God of the Bible and creation was an act of Divine kindness. Man’s sins are man’s failings and the Bible is the instruction manual for spiritual success. Most importantly, the primary text of the Kabbalah, the Zohar, is mostly an interpretation and commentary of the Bible. It’s not a separate discipline, it’s simply a deeper, more spiritual overlay superimposed on the Bible. There are also elements of Kabbalah that are purported to enable the righteous to control nature, perform miracles and use practical magic. In a sense, Kabbalah is a sort of spiritual physics. It explains the spiritual structure of the universe and provides language and a framework for understanding creation from a non-physical perspective. Finally, Kabbalah is part of traditional, mainstream Judaism. Nearly every Jewish authority accepts Kabbalah as non-heretical and beneficial to one’s service of God. It is simply ludicrous to equate Kabbalah with Devil worship and equally ignorant to call Kabbalah “a Jewish form of Gnosticism.”

The primary basis for the claim that NOAH is a Gnostic film is the fleeting portrayal of Adam and Eve in the Garden of Eden as luminescent beings.

A 2nd century Gnostic text is an early source for the idea that Adam and Eve were not of physical body. The Zohar, a 13th century text of Kabbalah mentions a similar idea. This does not demonstrate that NOAH is a movie based on Gnosticism, nor would it demonstrate the Kabbalism is based on Gnosticism. In fact, there is a reference to Adam and Eve being “clothed in light” found in the Severus Scroll which predates the Gnostic source by at least a century. Indeed, the Bible itself describes the glowing face of Moses. Kabbalistic teachings connect the light of Adam and Eve in the Garden with the radiance of Moses upon his descent from Sinai. Luminescent Bible heroes are far more Jewish than they are Gnostic. Building a thesis which insists that NOAH is a Gnostic film based on this flimsy foundation is laughable.

Interpreting the moral landscape of NOAH as a materialism vs. spiritualism dichotomy is a gross misreading of the story.

As I’ve explained, the simplified morality of NOAH is actually a false dichotomy. At first, Noah believes that God is Good and Man is Bad. Therefore, Man should refrain from harming or even disturbing God’s creation. If God made something a certain way, that is the way it must remain. Man can only destroy and can never improve on God’s works. Man sinned in the Garden and continues to sin by recklessly destroying creation. There is no way for man to affect creation in a positive manner. Noah naively thinks this dichotomy is true. But after God destroys creation and Man saves creation in the ark, the script is flipped and Noah realizes that things are much more complex. His new world view, the classic Jewish philosophy that is present in every variation of Judaism including Kabbalism, is that the world was created for Man, but only under certain conditions. Man is given the Earth but is obligated to care for it. Moreover, Man is given an imperfect world and an imperfect body. Man’s job is to improve on the raw material provided by God. The way God makes things is not perfect. This is the simple, straightforward interpretation of the film. There is no reason to resort to convoluted variations of Gnosticism to explain the moral development of NOAH.

But more importantly, a film simply cannot be Gnostic and Kabbalistic at the same time. It has to be one or the other. One cannot point to a reference found in Kabbalism and use it as evidence that the film is based on Gnosticism. There are no objectively Gnostic references in this film.

Deciding that the film is Gnosticism and then twisting everything else to match a predetermined position is foolishness. 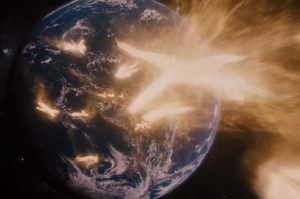 A perfect case in point are the Watchers. They are not a reference to Gnosticism, nor are they demons. The Book of Enoch, which is ancient Jewish text from 3-4 century BC, that is not canonized in the Jewish Bible, interprets the Nephilim of Genesis 6 as the offspring of angels of God who lusted after human women and abandoned God by fleeing to earth. This is not the story of the Watchers in NOAH.  But it is close enough that no meandering into Gnosticism is needed to form a valid basis for the Watchers in the film. The Book of Enoch predates Gnosticism by 500 or so years.

The serpent and its skin play a prominent role in NOAH.

Just before he is murdered, Noah’s father is about to pass on a relic of primordial snake skin to Noah. Tubal-Cain steals the relic and Noah recovers it upon Tubal-Cain’s death. This has nothing to do with worshiping evil or a false maniacal version of God.

There is one very prominent and specific reference to the snake skin in classic Jewish texts. Targum Pseudo-Jonathan (circa 11th century) states that the clothing God fashioned for Adam and Eve after their sin was made from snake skin. That is what was readily available shortly after they sinned. Thus, it is clearly a Jewish teaching that the snake skin was a gift from God to Man. The snake skin is not a rejection of God, it is a gift from God! It is hardly justifiable to concoct a complex theological explanation using Gnosticism to explain the relic in NOAH when a perfectly plausible interpretation from within Jewish tradition is readily available. 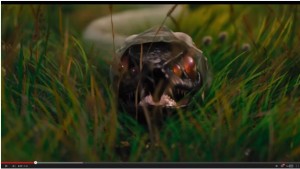 Further, the snake is a complex figure in Judaism. In many Jewish interpretations, the snake represents our evil inclination. Before eating from the fruit of the tree, Adam had no internal evil inclination. Evil existed externally. It was embodied by a bipedal, talking snake. This snake stood upright and sweet talked Eve into sinning. There is a Kabbalistic tradition that the snake seduced Eve sexually and their copulation was the root of her eventual sin of eating the forbidden fruit. The snake is external evil. When Man sinned, the snake was punished. His tongue was split so he could not speak and he was forced to slither on the ground. It was now impossible for the snake to communicate with Man and serve as an external evil inclination. Instead, God placed the evil inclination inside of Man. It was now a part of Man’s internal construction. Thus, the snake skin relic could also represent the externality of the original snake’s role. It would serve as an external reminder of Man’s capacity for evil.

When understood properly and worn in the ritual manner, the snakeskin is a visual aid that tells man to beware of the internal snake, the evil inclination.

This would be entirely consistent with the ritual of wearing Tefillin, phylacteries. The way the snake skin was wrapped on the arm was quite similar to the way Tefillin are wrapped on one’s arm. One of the purposes of Tefillin is to serve as a reminder of our duty to God. It’s not hard to see the parallels between Tefillin and the snake skin relic. Turning to Gnosticism to make sense of the snake skin without considering Judaism and its Kabbalistic traditions is irresponsible and insulting. 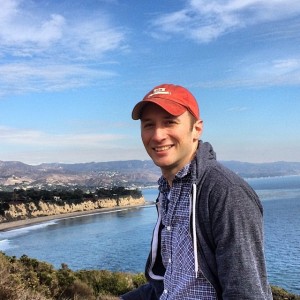 NOAH is not a Gnostic film. The only reason any Gnosticism might be apparent is because of the distant and tenuous relationship between all mystical traditions. As much as NOAH is not Gnosticism, Kabbalah is a thousand times more not Gnosticism. To recklessly equate the two is akin to saying Chess is pretty much the same as playing the lottery. They might both be called “games” but there is almost nothing deeper that connects the two. Such is the relationship between Gnosticism and Kabbalah. Every reference to Gnosticism is more simply explained with traditional Judaism and Kabbalistic traditions.

Rabbi Eliyahu Fink, J.D., is the rabbi at the famous Pacific Jewish Center | The Shul on the Beach in Venice, CA. Connect with Rabbi Fink through Facebook, Twitter or email. He blogs at http://finkorswim.com.