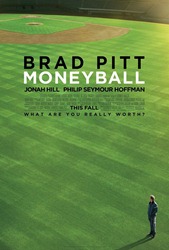 Don’t let the trailers or posters fool you. Moneyball isn’t a baseball movie. Sure, there’s some baseball in it, but the film is really about thinking outside the box and daring to risk.

Based on a book about a true story, Moneyball stars Brad Pitt as Billy Beane, the General Manager for the Oakland A’s. After losing in the playoffs to the Yankees in 2001, the A’s lose their three key players to teams that can pay them more. Beane realizes that the A’s simply can’t afford to play the same kind of baseball everyone else played. That system essentially bought players the scouting system deemed best.

Moneyball demonstrates that old scouting system is highly subjective – one scout rejected a player because his girlfriend was ugly, which indicates a lack of confidence! The A’s couldn’t afford to compete in this system: they had a $38 million payroll compared to the Yankees $114 million. If he wanted to win, Beane needed a different game.

The subjective scouting system – and by extension the whole game – had changed little since the 1800s. 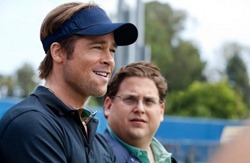 Change comes in the form of young, Yale-educated economist Peter Brand (Jonah Hill). Brand has developed a much more complex, scientific way to analyze players. Treating the baseball season much like the stock-market, Brand recommends investing in more underrated (thus cheaper) but consistent players over a roster with a few all-stars. According to Brand, Baseball needs a new bottom line: getting on base.

Bean puts his reputation and career on the line to embrace Brand’s new system.

Beane models bold leadership. Everyone hates his decision to adopt Brand’s method: his scouts, his manager (Philip Seymour Hoffman), the fans. But Beane never wavers. He resolutely demands the A’s try it his way, and succeeds seemingly on force of will alone.

But Beane had no other choice. His team had been gutted and he couldn’t afford new players. His organization can’t imagine any other way to run a baseball club. When the scouts refuse to see that they must change, Bean berates them:

Beane knew that everything either changes or dies. And the game of baseball had become a stagnant, dying sport in which the few very rich teams always won, while everyone else languished in the basement. He hated the system that had turned baseball into such an unfair institution.

Beane’s love for the game itself drives him to change it at a basic level.

Beane didn’t kill Baseball. He changed it. What he killed was the established Way baseball had always been managed.*

To those like Beane who were ready for change, “Moneyball” was good news. To those invested in the Established Way, “Moneyball” was a threat. But after the A’s 2002 season, no one could pretend that the game hadn’t changed.

Moneyball tells the story of how baseball changed. But it’s a universal story. Every organization, every institution eventually stagnates. Good leaders learn to think outside the box, to break rules everyone thought were sacred. And like Beane, the change initiators bear the scars of their sacrifices.

For those who love the essence of what they do more than their institutions, the scars are worth it.

Bottom Line: Moneyball is a great film about the high cost – and the inevitability – of change. Oh yeah, and baseball.

YOUR TURN: What did you think of Moneyball? Do you agree that everything either changes or dies? What change have you participated in?

*The film subtly critiques Beane as well. The A’s fail even to make it to the World Series, which Beane takes as a failure of his method. But the Red Sox owner John Henry points out that Beane won as many games as the Yankees, but for a fraction of the cost. He sees this as success, but Beane wants nothing less than a Championship. If that is just another form of superstardom, then Beane has not embraced the Moneyball methodology as thoroughly as Henry and Brand have.