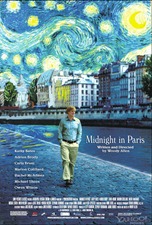 We meet Gil in Paris with his fiancée Inez (Rachel McAdams) and her parents. While Gil hopes the romance of the city will inspire his writing, he really pines for Paris of the 1920s. Walking back to his hotel one night, Gil learns that at midnight at a certain intersection, a car will arrive that can transport him back to his idealized Golden Age.

Gil meets idols like Hemmingway, F. Scott Fitzgerald, Gertrude Stein and Dali. He believes this Past will make him the writer person he wants to be.

His time in the past illuminates Gil’s present unhappiness. Whatever originally drew him and Inez together, they have no chemistry and little in common. Her parents despise him and no one champions his dream of becoming a novelist. Gil and Inez grow further apart as Gil spends more and more time in the past.

Gil meets Adriana (Marion Cotillard), Picasso’s young mistress, and their relationship quickly blossoms into something powerful. His fascination with the past intertwines with his growing obsession with Adriana.

Who can blame him? Gil has the chance most of us only dream of: he can escape the discontent of his Present. He can choose “the Good Old Days” of the Past. 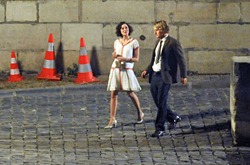 But when Gil and Adriana discover that the magical Midnight corner works in the 1920s as well, when they travel back to the 1890s, to the Belle Epoque, Gil learns that those who lived in the “Good Old Days” don’t share his (mis)perception.

Adriana considers the Belle Epoque the Golden Age of Paris. She has idealized the 1890s as thoroughly as Gil has the 1920s.

Gil remarks to her:

Changed, Gil rejects his idealized past. Adriana, however, chooses to stay. He leaves her and returns to the present.

Rejecting the romanticized Past enables Gil to take control of his Present.

All along, Midnight in Paris has seemed a bit too much like a fairy tale. The characters are one-dimensional. The plot points are contrived. Gil’s revelation comes too easily. But in the end, that’s the point.

All of us are tempted to idealize the past. But pining for the Good Old Days can anesthetize us to our responsibilities in the present. Just like Gil, we often lack the courage to change our circumstances, blaming our misery on “these trying times”. Midnight‘s simplicity is an excellent vehicle for its message: 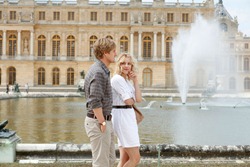 Nostalgia becomes a drug that dulls us to the beauty of the life happening around us.

In the end, Gil rejects the nostalgia that’s paralyzed him. He takes responsibility for his choices and changes his life. It’s not exactly “Happily Ever After”, but Midnight‘s challenge to us is unmistakable.

Bottom Line: A morality tale warning against the dangers of nostalgia, Midnight in Paris challenges us to take responsibility for our lives. To embrace fully life as it is now.

YOUR TURN: Did you like Midnight in Paris? Do you agree with its take on nostalgia? Where do you see this in your world?