To hear me discuss Man of Steel, check out my StoryMen podcast!

I grew up in Kansas, General. I’m about as American as it gets. — Superman 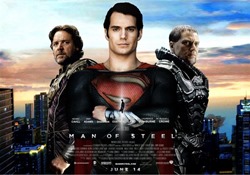 To be fair, as long as Superman punched something, I was going to love it. And punch something he did.

Man of Steel has the best visual effects of the Summer so far (neck-and-neck with Star Trek Into Darkness) and despite retelling a story that probably everyone on the planet knows (he’s an alien?! What?!), the story feels fresh.

Let’s be clear: I love comics, but I don’t insist that comic book films hew rigidly to the comics. I loved Nolan’s Dark Knight trilogy despite some massive deviations from canon. And the huge twist in Iron Man 3 didn’t bother me in the slightest. Change is good. Telling new stories is good. But you can go to far. At some point, you change a story too much. At some point, it’s no longer recognizable as the character you know and love.

Man of Steel changed the core of who Superman is, and as a result fails to be a true Superman story. 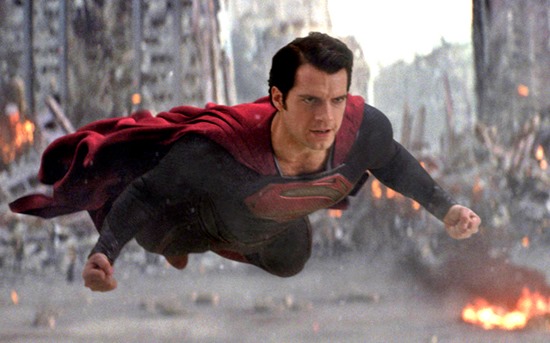 SPOILERS FROM THIS POINT FORWARD!

Yes, I’m talking about the ending, when Superman executes Zod. And it’s not just the fact that Superman kills him, it’s the role that killing plays in the story.

Man of Steel reintroduces us to Clark Kent, who quickly learns that he’s not like everyone else. Clark, the clear hero of our story, wants to understand his place in the world. This is the conflict his hero’s journey must successfully resolve. The conflict is introduced when Clark realizes he represents the possible destinies of two separate peoples: Kryptonians and Humans.

Those two peoples need not necessarily be at odds. His Kryptonian father Jor-El advocates for a peaceful co-existence between the two worlds – Clark would become a bridge between two peoples. General Zod can’t imagine a world where Earth and Krypton can co-exist. In Zod’s worldview, only one can survive. Zod promises,

This only ends one way, Kal: either I die or you do.

Pa Kent is nearly no help at all, essentially only telling Clark that his decision is very important.

In a shocking, essential departure from 75 years of Superman stories, Kal-El succumbs to Zod’s worldview. He not only destroys the ship carrying Krypton’s future, he executes Zod, the collapses into Lois’ embrace, wailing in despair. Superman agrees with Zod that there’s not room for both races. He just chooses Earth instead of Krypton.

Superman resolves his hero’s journey by choosing one of two painful options at the expense of the other. He rejects (or fails to imagine) the world Jor-El hoped he would bring about.

Why is this bad?

For years, comic writers have been putting Superman in unwinnable situations – when your hero basically has God’s powerset, it’s about the only way to make him interesting. But the joy of those stories is marveling at how Superman beats the unbeatable.

We face unbeatable situations all the time. We live in moral grey areas and issues that are too complicated for us to understand. We may not have to choose between two races, but we are constantly faced with impossible choices that we recognize in Man of Steel. We know the pain of a no-win situation. We often have to choose between the lesser of two evils.

There’s no such thing as a no-win scenario for Superman. That’s what makes him Superman.

This is what Man of Steel utterly fails to do. By forcing Superman to kill Zod, the writers embrace Zod’s dark worldview. Man of Steel’s Superman rejects the possibility Jor-El represents: a better, peaceful third way. This is an essential departure from what makes Superman work. Even in the very rare instances he has killed in the comics, it’s consistently judged as a bad thing, an abberation, a failure on Superman’s part. But in Man of Steel, killIng Zod is the final step in Clark’s hero’s journey. The strength to snap his neck is both physical and moral, representing Clark’s ability to “make the tough call”.

A Superman who can’t beat an unwinnable situation doesn’t reflect who we could be. He reflects who we are.

You may rightly be asking yourself if a silly summer blockbuster is really worth all this thought. But Superman has always been much more than that. He’s not only a symbol of Americana, he’s also an obvious Christ figure – something both Superman Returns and Man of Steel played up. So we should be deeply bothered that Man of Steel’s excellent writing team apparently couldn’t think of a single way for Superman to win that didn’t involve killing Zod.

The movie unforgivably tries to have its cake and eat it too, striving hard to make Superman “realistic” while nevertheless overdosing on Christ imagery. It’s a balancing act: They cover Superman in mud and then pretend his hands are clean. Maybe they think his hands are clean. Maybe Man of Steel is a Superman movie that doesn’t understand or even care about basic questions of morality. Maybe Man of Steel assumes that killing is just something heroes do now.

Superman wins not because he’s smarter or more noble or better in any way. He wins because he’s stronger. This is the ultimate statement that might makes right.

Man of Steel says killing is ultimately okay. As long as we don’t really want to do it, and as long as we feel really bad about it afterwards, we can enact what ever violence we deem necessary to accomplish our ends and it’s not just permissible. It’s moral.

I understand that plenty of people believe that violence is justified in certain situations. Unfortunately even many Christians advocate violence as a preferred solution. But look at the stories we’re telling today: our “Jesus” embraces violence as the ultimate end. Rather than conquering sin and death by sacrificing himself, he becomes judge, jury and executioner.

We need a better hero than this. We need a hero who can show us how to be better than who we are, not who just shows us who we already are.

Bottom Line: Man of Steel is well-worth seeing, but it strays to far from the core of who Superman is to be the Superman film we’ve been waiting for.

YOUR TURN: What did you think of Man of Steel? How did you feel about the ending?