Mad Max Fury Road is an amazing spectacle, one of those films you won’t want to miss on the big screen. This movie is a workshop in the old storyteller rule to “show don’t tell.” It’s also a tribute to the bygone era of silent cinema.

Director George Miller basically invented the post-apocalyptic wilderness settings of cinema three decades ago with his Mad Max trilogy. The newest entry into the franchise returns us to that desperate future. With new CGI effects and the latest stunt tech to play with, Miller’s feature-length desert chase is jaw-dropping.

The characters are zanier than ever, too. Like, if you’ve never dropped acid but are kind of curious what it’s like, some of the stuff in this film might actually give you a clue. 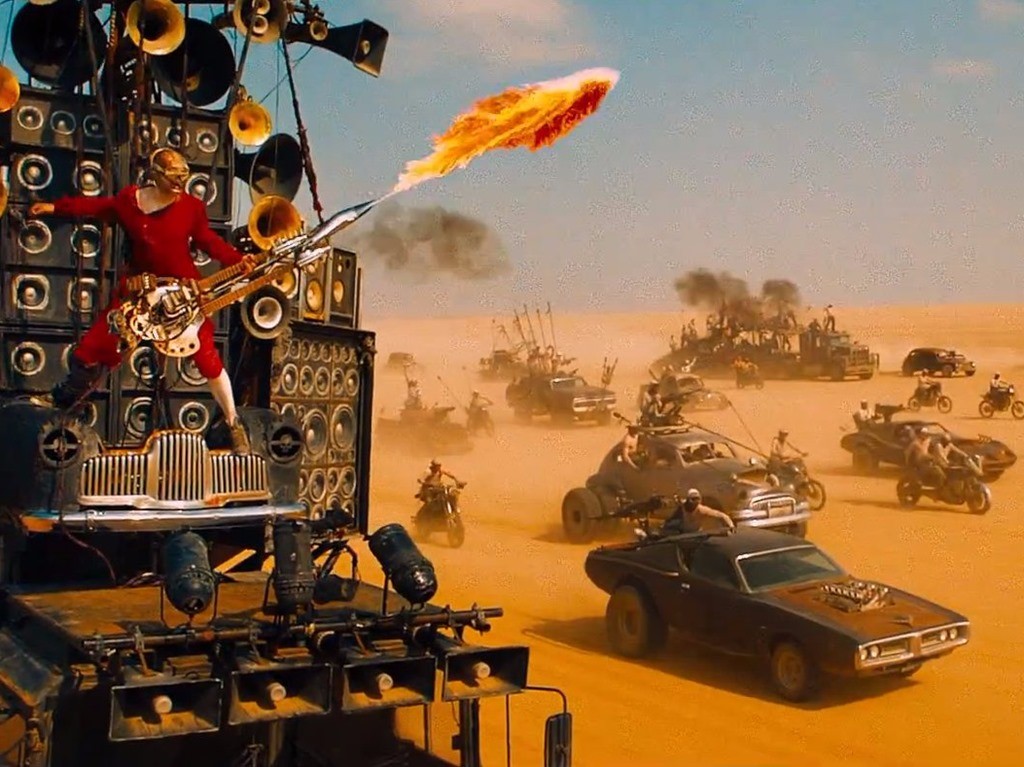 One of the most striking aspects of Miller’s movie is how little dialogue is used. The script calls for few words from main characters Max Rockatansky (Tom Hardy) and Imperator Furiosa (Charlize Theron), for example.

With so much of the story spent in full on action mode and so few lines spoken for stretches of time, I couldn’t help but think of one of the masterpieces of early Hollywood–The General by Buster Keaton.

Released in 1927, The General is an action/adventure/comedy by legendary writer/actor/director Buster Keaton. The General reimagines a famous locomotive chase during the American Civil War. The American Film Institute ranked it #18 on the list of all-time greatest movies.

It was one of the most expensive movie productions of its time. The most iconic shot features a railroad bridge being collapsed as a train engine crosses. The spectacular wreck cost over $50,000 to shoot (the equivalent of more than half a million today).

“I was one of the those people who believed that the silent cinema actually invented the syntax, invented the language we are still working with today. The silent cinema was driven by action, by comedy: Buster Keaton, Harold Lloyd. There wasn’t much spoken, words were just on cards. And so those two things conflated into me making ‘Mad Max.'”

Miller’s new movie supplies some drama too, as did the works of the silent icons he reveres. Movies were born of images dominating words, and for all the fabulous rat-a-tat dialogue that emerged in Hollywood’s Golden Age, there is still power in a director’s ability to convey so much story with so few words.

Of course, the stunning stunt work at Miller’s design and disposal adds a great deal to Mad Max.

Buster Keaton didn’t spend United Artists money on stunt doubles. He did all his own work, believing that comedic effect was lost if you couldn’t distinguish the actor’s face. And Keaton had one of the greatest faces in history. He was known as “The Great Stone Face,” but deadpan did not mean expressionless.

Check out the first couple minutes of this clip. Watch how Keaton maintains his composure while performing stunts with heavy railroad ties. How easily this maneuver could have gone wrong.

The actors in Mad Max Fury Road, most notably Charlize Theron, also demonstrate a great ability to express depths of feeling without saying a word. And Miller’s style is full of zooms and closeups to help capture some of the same nonverbal magic found in the work of silent era creators.

You should check out the new Mad Max movie this summer. But also check out The General. The DNA of great storytellers is seen in both works. Anyone can tell a story. Some people can tell stories well. But only a few masters can tell a story without actually telling us everything. They are the story showers. And they’re great.

What is some of the best story showing you’ve ever seen?