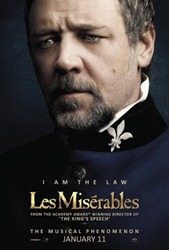 Vengeance was his and he gave me back my life!
Damned if I’ll live in the debt of a thief
Damned if I’ll yield at the end of the chase
I am the law and the law is not mocked.
— Javert, “Javert’s Soliloquy,” Les Miserables

Les Miserables is the newest theatrical version of the 1980 musical based on the 1862 novel. That alone should hint at how powerful the narrative is. Les Mis endures precisely because it so powerfully showcases basic human themes like grace, mercy and the crushing, relentless despair of law.

Javert, the policeman, represents the system of law, and by extension everyone who orders their lives according to Law. You don’t have to be a judge or a policeman to be a Javert. He is anyone who prioritizes right and wrong, justice, right living as the highest virtue in life. In fact, most of these people end up in churches.

Like Javert, Legalists believe they are following God’s will, that their ceaseless efforts to uphold Right give them special standing in God’s eyes.

This is the Javert we meet at the beginning of Les Mis. He has no mercy on the prisoners, no mercy on Jean Valjean whose only crime (in the film) is stealing a loaf of bread. For Javert, there are never extenuating circumstances. Never exceptions to be made. There is only Right and Wrong. Right is rewarded and Wrong is punished.

We witness Jean Valjean’s transformation, but Javert cannot imagine that Valjean could change. In his mind, Valjean is only and always a lawbreaker. Even when Valjean repeatedly begs for mercy, Javert will not bend. He can’t.

The Javerts of the world must punish lawbreakers. Their entire system of beliefs demands it.

The first cracks in Javert’s Legalist system appear as Valjean spares his life. Javert finally understands that Valjean has become a different person. This should be impossible in Javert’s worldview, but he’s saved from dealing with the implications because Valjean must still be punished for his crimes.

Javert returns to arrest Valjean, and finds him emerging from a sewer carrying the dying Marius. Valjean once again pleads for mercy but Javert will not – cannot – yield. No matter how good he is, no matter that he spared Javert’s life, Valjean is a lawbreaker and must be punished. Javert warns Valjean that if he continues on with Marius, Javert will kill him.

Without hesitating, Valjean marches on, offering up his own life for the sake of Marius. In the face of this act of self-sacrificial mercy ,  Javert’s code of Legalism crumbles.

And must I now begin to doubt,
Who never doubted all those years?
My heart is stone, and still it trembles.
The world I have known is lost in shadow.

Because Javert’s system of law has no room for grace, mercy or forgiveness, Javert cannot imagine a world where the wicked are not punished. The impossibility of Valjean’s Christ-imitating self-sacrificial love leave Javert broken.

The true tragedy in Javert’s story is that he responds to hope with depsair. By killing himself, he responds to the possibilities Valjean’s self-sacrifice represent by fleeing into the shadow of Death.

This is the fundamental failure of Legalism: each of us is at some point a lawbreaker. We all need mercy or we face death. If we build our lives on Law, instead of Mercy, then we – like Javert – can only despair. Javert is a tragedy. He’s a good person who learns his own goodness isn’t enough to bring him life. He learns what Paul warns us: The Law comes and kills us.

We are saved not by Law but by Mercy. We must extend that same Mercy to the world around us.

YOUR TURN: Do you tend towards Mercy or Law? How has Legalism hurt you or someone you know?