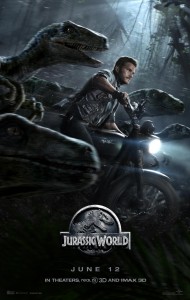 It’s been a little over 20 years since the original Jurassic Park left its monstrous footprint in cinematic history – and on many of our collective imaginations. Since then, movie-makers have tried repeatedly to recapture the sense of awe and terror the original inspired in us, though with little success – both The Lost World and Jurassic Park III were pretty abominable.

Jurassic World hopes to change that with the rallying cry “More teeth!”

(Seriously, that’s the unofficial tagline of the film, uttered by at least 4 different characters). If the box office numbers are any indication, it’s well on its way. After its first weekend, the film now sports highest-grossing opening weekend of all time, beating previous record-holders The Avengers (U.S., 2012) and Harry Potter and the Deathly Hallows, Pt. 2 (2011, International), for a combined $524.1 million. Cue the dinosaur jokes.

With Jurassic World sequels planned before the first film even released, it actually doesn’t matter whether the film is any good. But we’re reviewing (and as someone once said, entertainment is never mindless).

So: Is Jurassic World any good? Yes, and really, really No.

To read the whole review, check it out over at Reel World Theology!