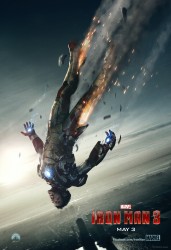 The armor was never a hobby or a distraction. It was a cocoon. — Tony Stark

Iron Man 3 is Robert Downey Jr.’s fourth (and possibly final) turn as Tony Stark under his third director – Shane Black (Jon Favreau and Joss Whedon being the previous). It’s also the first Marvel Phase 2 film – meaning it’s the first single-hero film they’ve released in the wake of team-up superfest Avengers. The question on everyone’s mind is: Does Tony Stark still have an interesting story to tell?

Iron Man 3 proves the answer is Yes. Tony is back with a vengance and leaves us anxious for more!

Iron Man 3 features a new, more vulnerable Tony, the same cast we’ve grown to love and a pretty plausible excuse for not having other Avengers show up (not that I ever had a personal problem with that – as a comic reader I love reading both stand-alone Iron Man and Avengers titles). The villain is great, the story is great. It’s all great (in fact, Pepper and Rhodie are probably the two weakest parts of the film). If you liked the first Iron Man, my guess is you’ll love 3. If you didn’t like Iron Man 2, don’t worry! This film avoids 2’s mistakes nearly to a fault. 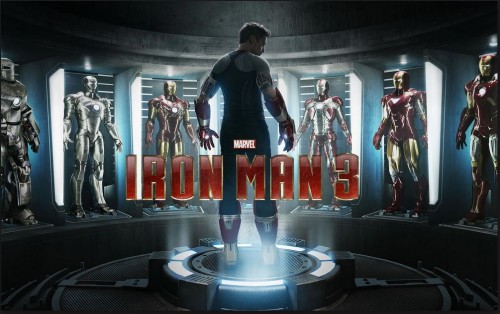 Iron Man introduced us to a Tony Stark facing the quintessential adolescent crisis: he’s trying to differentiate himself from his father – his father being Howard Stark, weapons manufacturer. Tony does this by becoming a living weapon, announcing to the world at the end of the first film,

I am Iron Man.

Tony’s announcement is all bravado, all adolescent swagger. He announces to the world that he’s big enough, bad enough to take on anyone.

The Avengers changes all that. Tony realizes some things are too big for him.

Iron Man 3 opens on a frightened, panicked Tony. He’s withdrawn from the world, spending all his time building bigger and better armor. Because Tony draws his identity, his security from what he can build.

All of that is stripped from him by the Mandarin, who is later revealed to be as false as Tony himself – all bravado and special effects. In the Mandarin’s attacks, however, Tony is stripped of everything – his allies, his love and his precious armor.

In his helpless, child-like state, Tony befriends a boy who must remind him a lot of himself. This kindred spirit guides Tony back to himself, helps him to understand and embrace that he is not his armor. He is the man behind the armor.

This is why the rest of the film is so compelling despite the fact that Tony is rarely in a suit. We enjoy watching him think his way out of scenario after scenario.

Iron Man 3 becomes a film about Tony Stark, not the Iron Man suit (a theme that is carefully and cleverly developed as the film progresses). 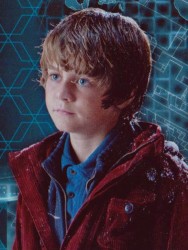 Iron Man 3 pulls off a potentially fatal move: it finishes Tony’s story. A fantastic article I read a few months ago (and can’t find now, to my chagrin) points out that comic books tell and retell Act 2 of the hero’s journey ad infinitum. They have to. If we ever actually finish Spider-Man’s story, then we won’t buy anymore Spider-man comics. But of course we already know who Spider-Man is, so there’s no need to retell his origin (Act I, and yes I’m looking at you Mark Webb). So we get Act II – the juiciest part of the story – over and over. Hero faces villain. Hero suffers. Hero triumphs. Hero learns a valuable lesson.

This is why Iron Man 2 suffered: Tony’s character arc – from rich, selfish jerk to genuine hero – was essentially the same as the first film (To be fair, it’s also the exact same as The Avengers, too, but a) other heroes and b) Joss Whedon). Shane Black avoided that by taking Tony from the end of his Act 2 – his adolescent swagger wasn’t enough to cope with a world of gods and aliens – and finishing his story.

The Tony we see at the end of Iron Man 3 is a grown man, now sure of who he is and where his true strengths lie.

He ends the film (excepting the obligatory-and-awesome post-credits stinger) the same way he ended Iron Man, by proclaiming,

I am Iron Man.

But now there’s no bravado. And he’s not talking about the armor anymore. Tony is Iron Man. Not the suit he built, but he himself. The man behind the suit. He emerges from his cocoon ready to take on the world afresh. By the time the credits roll, we realize that Marvel Phase 1 has been one long origin story for Tony Stark – Act 1 of a larger story. And you’d better believe we’re hungry for more.

Bottom Line: By finishing the story of Tony-the-boy, Shane Black has introduced us to Tony-the-Man. I can’t wait to watch his story.

YOUR TURN: What did you think of Iron Man 3? How did it compare to Marvel’s other films? What do you think is next for Tony?