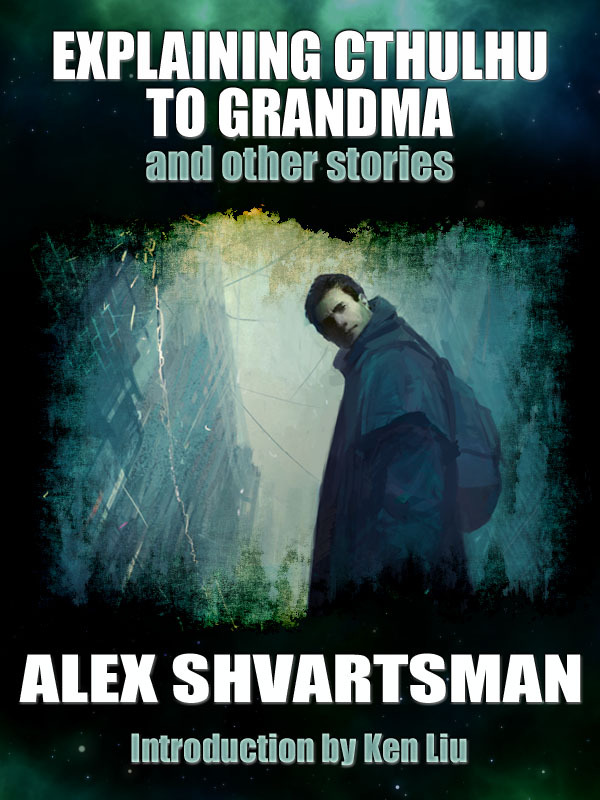 Alex Shvartsman is an author who is currently running a Kickstarter campaign for a book that will include all of his previously published short stories… well over sixty stories! I’ve read a few of these (including the story from which this book takes its title), and Alex is an excellent, thought provoking author.

For those who don’t know, Kickstarter is a crowd-funding platform that allows artists to get preorders on their artistic endeavors, giving them the money they need to make their work available. If you order the book now you can not only get the book, but a lot of special extras, including anthologies that Alex has edited (many of which have some of my stories in them!).

I already backed the campaign and ordered my books. I reached out to Alex to see if he’d answer a few questions for us.

1. Can you explain “Explaining Cthulhu to Grandma” to us? Why did you choose this story for the title story?

“Explaining Cthulhu to Grandma” is arguably my most successful story to date. It was the finalist in the 2013 IGMS Reader Poll, and made the 2013 Tangent Recommended Reading list with the highest possible rating. But, really, it’s the title. Very few people don’t react positively to it; they want to read that story!

2. You’re widely known as the editor-in-chief of the Unidentified Funny Objects anthology series. How many of your stories in this
collection are humorous? What do you love so much about humorous speculative fiction?

I’ve always enjoyed a good humor story (how could I edit the UFO series otherwise?). The idea to launch Unidentified Funny Objects was born, partially, out of my frustration with how few professional-level markets seek out humorous stories. I try to inject humor into many of my stories — be it outright humor, as is the case with the Magic Pawn Shop stories, or subtler flashes of funny, as with the Conrad Brent series. I’d say approximately a third of the stories in the collection are humorous. I have some really dark stuff in there, too, though I don’t write outright horror.

3. Tell us a little about the cover art for “Explaining Cthulhu to Grandma.” What story does that represent? Who’s the artist? Where can we see more of her/his work?

The cover art is by DIxon Leavitt, who is a professional artist. He drew the cover of the first Unidentified Funny Objects anthologies, among others. The cover depicts Conrad Brent in a scene from “A Shard Glows in Brooklyn.” We used only a piece of the artwork to make the cover look different from the covers of my individual story e-books, which you can see here. I was torn between re-using this piece and commissioning original artwork that would go with the title story, but ultimately I decided that I love Dixon’s cover too much, and it deserved to be on a physical book. I should also add that the cover layout is by the amazing Emerson Matsuuchi, who is also the graphics designer behind the UFO and Coffee anthology covers.

4. It’s interesting that the print and the e-book versions will have a different number of stories. How did you go about making that determination? How do you do things like decide the order of the stories for a book like this?

As a collector and fan, I feel “everything” is a powerful draw. I have something like 130,000 words worth of short fiction out there. That’s too much to fit into the book. I’m looking to include the 40 or so best stories in the print book, but I also want to provide all the other published stories as part of the expanded e-book. The selection process f
or the physical book is tough, because there’s so much material I would like to share with readers. However, it’s no tougher than selecting two dozen stories from among 500-800 submissions when working on an anthology. And, this time, I can’t get upset at the editor for not picking my story! 🙂

The order of stories is still somewhat in flux. Ordering stories in an anthology or a collection is more art than science. Many editors will tell you to “open strong and close long,” Others want the strongest story to come last, because it will be the most lasting impression the reader has from the book. Others yet like to close with a humor piece, but I obviously have many more than one of those in this collection. I don’t know the exact order of all the stories yet, but I’m pretty certain that I’ll open with “Explaining Cthulhu to Grandma” (obviously) and close with “Fate and Other Variables,” which is forthcoming this November from Mike Resnick’s Galaxy’s Edge magazine. I love that story and made sure the collection would be released on the date when I would be allowed to include it. Thematically it works wel
l as a closer, but I won’t say anything more to avoid spoilers!

5. How can interested people best support this book and the Kickstarter campaign for it?

Well, the obvious thing would be to order the book. There’s a great range of options there, from fairly cheap to extravagant. But the signal boost is even more important. Letting other readers know about the campaign will help out as much as ordering a book yourself!

6. Aside from this one (of course) what is your favorite single-author anthology of science fiction and/or fantasy?

This is a really tough question, and I would like to give you a cop-out answer that includes several collections (and it is a collection; an anthology is a bunch of stories by different authors, and a collection is a bunch of stories by a single author.) The Best of Fredric Brown, Birthright by Mike Resnick, The Doors of His Face The Lamps of His Mouth by Roger Zelazny are all among my favorites. And that’s just off the top of my head. I bet that, the more I think about it, the more answers I will come up with until I’m totally incapacitated by indecision!

Okay, I just learned something new! Already! And I’m not even reading Alex’s book yet! Click on the link to Alex’s Kickstarter page and you can see his answers to a lot of other questions, a video with the author, and links to some of the stories that will be included in the final product. Go check it out! Also, you can follow Alex on Twitter, or go hang out at his website.