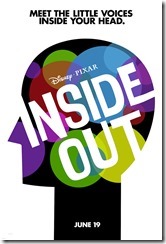 You’ve no  doubt heard by now that Pixar’s latest offering, INSIDE OUT, is a return to form for the once ground-breaking animation studio. After they were acquired by Disney, the quality of their films dropped off dramatically (anyone remember Brave?) 2014 marked the first year since 2005 the studio hadn’t released a film, and that year off only contributed to the buzz surrounding INSIDE OUT.

The film was worth the wait. INSIDE OUT introduces us to 11-year-old Riley, who’s just moved with her parents from Minnesota to San Francisco. We spend most of the film inside Riley’s head, where we meet the 5 chief emotions who govern her (and everyone else’s) life. These emotions – Joy, Sadness, Fear, Disgust and Anger – literally run Riley’s world. The emotions are fantastic, in large part due to the outstanding voice-acting from the likes of Amy Poehler, Phyllis Smith, Lewis Black, Mindy Kaling and Bill Hader. The “world of the mind” INSIDE OUT establishes is creative, fun and packed with gags. Everything the film sets up in the first Act – the Train of Thought, the Memory Dump, the Dream Studio – it all pays off masterfully, and often in surprising ways.

If INSIDE OUT has a weakness it’s that the rules of the universe are pretty arbitrary. But the story flows so well, you’ll probably only notice afterwards. 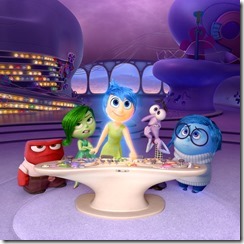 The film explains the (very complicated) world in a massive exposition dump at the beginning of the film. In true Pixar form, however, Joy’s exposition is so beautifully rendered, you won’t mind at all.

Why are these five emotions the five core human emotions? Where is love? Where is generosity? A relatively small nit, but I did wonder. At times, too, the film’s high concept proved too much for its internal logic. Again and again, Sadness touches Riley’s joyful memories, turning them sad and making Riley sad. Though she’s warned again and again not to do that, and seems to experience genuine remorse (why can the emotions feel other emotions?), she does it again and again – it’s like a compulsion. Why? The film doesn’t explain.

Thematically, it’s because Riley has suffered a major trauma – she moved away from everything she’s ever known. In the wake of such trauma, even our happy memories become sad, at least for a time. That makes sense. It’s beautiful imagery. But it’s not explicit in the film, and I found myself taken out of the story every time this gag was repeated as I tried to make sense of it.

Again, these nits are minor. They’re certainly overshadowed by the rich thematic world of INSIDE OUT. This is a film that invites us to grieve, a message our culture desperately needs.

We’ve barely met Riley before her world is turned upside down by an apocalyptic (for an 11-year-old) event: her family moves across the country. Riley loses everything that grounded her world – her friends, her hockey team, and in a way even her family – her dad’s preoccupation with the business he moved to start clearly takes much more of his time than Riley is accustomed to. The moving truck that has the majority of their possessions has for reasons Riley never fully understands been delayed, leaving her to adjust to her new house without her clothes, her keepsakes or even her bed.

Throughout this, Riley’s mom repeatedly praises her for being “her happy girl”, and through the person of Joy, we see that Riley has thoroughly internalized this demand. She feels as though she has to be positive all the time, and there’s no room in Riley’s world for Sadness (at one point, Joy looks at Sadness and admits, “I don’t know what you’re supposed to do.”)

Replace “moving across the country” with any tragedy and you can probably relate to Riley’s experience.

The death of a loved one. The end of a relationship you fought for but just didn’t work. An estranged family member. The loss of a job. In these times, we can’t imagine how else to be but sad, yet our culture is deeply uncomfortable with grief. Like Riley, we don’t have permission to be sad – our grief makes everyone else uncomfortable.

In the end, however, Sadness is Riley’s only hope. Joy is so focused on getting back to the control room that when Bing Bong, Riley’s old imaginary friend (who is amazing), breaks down, Joy can’t help. Bing Bong is grieving the loss of Riley’s childhood – as she has grown up, he’s become less and less relevant. And – much like Riley’s cross-country move – there’s no going back. Riley might remember Bing Bong fondly from time to time, but he’ll never again hold the place in her life he once did. That’s not good or bad. It’s just reality – the price of Riley’s maturing.

But just because something is real doesn’t mean it can’t be sad. And so when Sadness sits with Bing Bong, when she embraces him and says, “I know how you feel”, her shared grief enables Bing Bong to continue with their mission.

Joy finds the same to be true when she reviews one of Riley’s core memories – it shows her old hockey team, the Prarie Dogs, cheering and celebrating Riley. Sadness recalls that as the day Riley’s team lost the big game because Riley didn’t score the goal. When Joy rewinds the memory further, it turns from golden joy to blue sadness. She watches as Riley grieves the loss, convinced she’s done with hockey, only to be comforted by her parents and then celebrated by her team.

Joy exclaims, as revelation washes over her, “Sadness leads to Joy!”

And so they return to the control room just in time for Sadness to guide Joy back to her family. She apologizes to her parents for being unable to be happy for them, confesses her grief to them. Instead of judgment or disappointment, they gather her into their arms and whisper the magic words – “I’m sad too.” Riley forms a new core memory – one that’s both golden joy and blue sadness.

In a culture that doesn’t know how to lament, we need to be told it’s okay to be sad.

We are so afraid of sadness that we’ve shut ourselves off from the gift of grief. We’ve convinced ourselves that Joy is the opposite of Sadness, that we have to be happy all the time, that sadness makes us weak.

But while many a relationship has been planted in the soil of joy, they only become strong as they weather adversity together. A marriage, a friendship, a community that has not suffered together is not strong. The gift in the center of grief is the feeling of a sympathetic embrace, of the kind words that whisper “Me too”.

This is the gift of the Cross, too, that God did not remain in heaven, leaving us to the consequences of human evil. Rather, God abandoned Heaven to become one of us, to share our joys and our sorrows. To take upon himself the consequences of the human condition. What was his cry of dereliction if not a cry of solidarity? When Jesus cries, “My God, my God, why have you forsaken me?” he is whispering to us, “Me too.”

We must learn how to grieve again, and the tools are right in front of us.

The Church has long ignored the resources our tradition has available. The book of Psalms – the literal songbook of the people of God – is filled with songs of lament. One of every three psalms was written to be sung by a people who is grieving. Can you remember the last time you sang one sad song in Church? Doubtful – most hymns and contemporary worship songs are positive. Not that there’s anything wrong with fun, positive songs (2/3 of the Psalms fit better in that category!). But is it any surprise we don’t know how to grieve well when we ignore the very texts designed to help us find holy rhythms for our grief?

The Church year, too, can provide space for us to grieve. Both Advent (the four weeks leading up to Christmas) and Lent (the 6 weeks before Easter) are seasons of fasting and repentance. Choosing to create space to grieve during these seasons (and following them intentionally with seasons of feasting) teaches us how to grieve (and how not to become trapped in our grief).

BOTTOM LINE: INSIDE OUT is a fun, funny, innovative film that gives us permission to grieve. It’s a timely, important film that’s well-worth your time.

YOUR TURN: What did you think of INSIDE OUT? How can we learn to grieve better?