We are currently gearing up for my son’s first Christmas. Because he’s only 8 months old, this Christmas will be more about us celebrating around him than him celebrating with us. But, as I’ve been decorating the house and singing favorite carols, I’ve been thinking about what I want him to grow up to believe about the holiday. 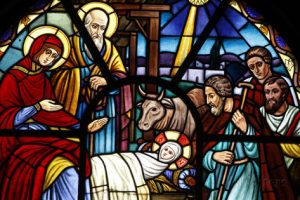 When my older children were little, I was a practicing Christian and made sure that they had an age-appropriate understanding of the doctrinal import of the Christmas story. Now that I think about it, my degree in theology may have skewed my idea of what constituted “age-appropriate” when it came to doctrine. As a family, we didn’t do the Santa thing; I felt it was important not to pantomime belief in a pretend character while at the same time instructing my kids to believe that Jesus, Mary and Joseph were anything but pretend.* My kids became adept at navigating the touchy social landmines of not believing in Santa. Meanwhile, we celebrated Christmas full of wonder at the manger scene, angels and shepherds and all.

So I’ve done Christmas without believing in Santa. But now, as I face crafting new family Christmas traditions with my infant son, I also no longer believe in God.

My loss of belief in God is a long story. It involves my sister in a near-fatal bicycle accident. It involves getting an advanced degree in theology. It involves my father’s death and the break-up of my marriage. It involves the consolation that philosophy provided that doctrine did not. Suffice it to say, at the end of it all, I am both officially agnostic and deeply content.

But I have this relationship to Christianity that is an important part of who I am. For starters, I teach religion at a local university. But aside from my professional interest, I remain convinced that religion is an essential institution. On a more personal level, I still treasure the extensive Bible education my Baptist upbringing bequeathed to me. In fact, I am disappointed when my students demonstrate little or no familiarity with the Bible stories I grew up with. For example, between two classes, I recently had only a few students who knew the phrase “good Samaritan” came from the Bible. Even fewer students had ever read the text. Not only is it sad that they don’t know such a morally powerful story, but Bible illiteracy in a culture where Christianity is dominant is dangerous. It opens the door of the Church to manipulative, power hungry people who would use the tradition as a convenient incubator to hatch their own agendas and cultivate their own prejudices.

So I want my students to have a familiarity with the Bible. And I’d like my son to know those stories too. I want my son to know the parables of Jesus of Nazareth. I want him to know the stories of the patriarchs that form the shared bedrock of the three Abrahamic faiths. I still believe in Christmas and want him to connect Christmas to the wonder of the manger. I want to be able to share these stories in a way that is respectful to those that believe in them.

With that goal in mind, I have begun returning to the key Bible texts of my youth to see what meaning they might have aside from their theological significance. I realize it’s difficult for me to truly sit outside of that framework (you can take the girl out of the Baptist church, but not the Baptist out of the girl), but the exercise has given me the opportunity to reconnect to stories that I have a great deal of affection for and have informed the person that I am today.

For the record, reading the text in this manner does not necessitate the exclusion of supernatural elements. Instead, my position to the narrative is closer to the suspension of disbelief required by many stories to gain entrance into their world. Again, I don’t want to be misunderstood; I take it very seriously that people — people whom I love and respect — believe the supernatural claims in these texts. Suspension of disbelief is not just about entertainment. Rather, I set my disbelief aside to engage honestly with the symbolic fabric of the story. My students and I routinely read sacred texts from other traditions in this way. My kids and I have read the mythologies of Greece, Rome and Egypt in a similar fashion. If there is any disrespect taken, there is none of it meant.

So, what about the Christmas story? I’m not the first person to point out that the story of Jesus’s family at Christmas time is a refugee story. It is the story of a family uprooted and vulnerable. First of all, there is Mary’s unusual pregnancy. Regardless of what you believe about its origins, if we trust the text for the timing, there’s no doubt it looked scandalous to Mary’s community. Then, the family is required to meet the bureaucratic demands of an oppressive foreign power. Traveling to register for taxes, they are unable to find a place to stay and end up squatting in a barn. In these details, there’s definitely a call to listen attentively to the stories of others. Our origin stories are not all of who we are, but they are an essential part of understanding the particulars of our present position.

The Christmas story is certainly not the first time that a baby was born to a teenage girl on the run in less than ideal circumstances –not the last by any means either, remember that this holiday season– but this birth is proclaimed by angels to be the birth of a king. Odd enough to think a king worthy of an angelic birth announcement being born in a barn. But adding to the oddity, the announcement is made to shepherds out in the fields. Shepherds occupied the edges of ancient society, literally and figuratively. Their flocks demanded that they seek out and dwell in the uncivilized parts of the country. Hardly the sort that we would expect to receive divine correspondence. Hearing the news, they abandon their flocks, the most important thing to their livelihoods, and go to check out this baby born a king. They find him with the animals and worship him.

If we can imagine that the God who created the universe would be born as a refugee baby, then we must assume that every person, no matter what their circumstances, is worthy of dignity and respect. If a divine king can be born in a feeding trough, then there should be no boundaries as to which people I value. Not only is every person worthy of my respect, but my commitment to basic human dignity cannot be a casual one. I should be willing to put my own resources on the line in extending a hand to others. I should act as if each person I meet might in fact be divine.

I think this reading is not very far off from the accounts of Old Testament and post-resurrection theophanies. In these stories, God (or Jesus) shows up in ways that people don’t recognize and it is only after hospitality has been extended that the divine within is revealed. The human actor is not just found out to be behaving well, but is caught in the act of offering what they have to others. Only that act reveals the divine character of the neighbor, the stranger, the enemy across from us.

The Christmas story invites us to sit outside with others. Listen to their stories. To invite them in. Or accept their hospitality on their terms. Especially to the point where my acceptance of others costs me something. That is the story I will tell my son at Christmastime. And maybe he won’t understand it this year, but it is my hope that he will grow to believe it. Even as I learn to better live out its truth, religious belief aside.

*If you want more on my decision not to play Santa with my kids, you can read here.