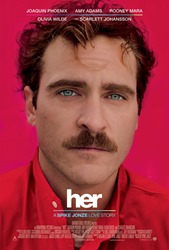 Her is the new film from Spike Jonze starring Joaquin Phoenix and Scarlett Johansson. The one about the guy who falls in love with his phone. I think a lot of the (well-deserved) buzz surrounding the film grows out of the shocking fact that it’s great. When we first heard the premise, we all thought “This sounds weird and gross.” And that first trailer both reinforced and undercut our skepticism.

The credit goes to Jonze and Phoenix, who make poor, awkward Theodore Twombly such a believable character. He’s just sad enough, just lonely enough and just hopeful enough that we believe he could develop a romance with Samantha (Johansson), his new artificially intelligent operating system.

But Her also works because it’s (surprisingly) such a basically human film.

Her is ultimately a celebration of our bodies in all their awkward, inconvenient mess.

When we meet Theodore, he’s already involved in numerous non-physical relationships. He works for BeautifulHandwrittenCards.com, where he composes letters for clients to their spouses, grandparents, friends. He trades in false relationships – the first job we see him completing is writing a letter ostensibly from a wife to her husband for their 50th anniversary. He later reveals that he’s been writing back and forth between one couple for years, since the early stages of their relationship. Theodore’s job is to put words in others’ mouths, to imagine the thoughts and feelings of strangers toward their loved ones and put them into words.

At home, Theodore’s life is no different. He’s been separated from his wife for nearly a year and is dragging his feet on the divorce paperwork. He spends his nights trolling adult chatrooms looking for cybersex. He has one real friend – Amy (Amy Adams), a friend from college who’s nearly as dissatisfied and lonely as Theodore.

This lack of embodied relationships forms Theodore to embrace a romantic relationship with a disembodied being.

Yes, it’s awkward. And No, we’re not sure who we should believe about Theodore’s e-relationship: his ex-wife who is disgusted, who observes that Theodore is now in a relationship that doesn’t require of him what a real woman would? Or Amy, the best friend who – partially because of her own (platonic) friendship with her ex-husband’s abandoned OS – affirms that a relationship is a relationship, no matter what the two persons look like (or in this case, don’t look like).

That Theodore and Samantha’s relationship feels so compelling is a testament to how gnostic our culture is. Gnosticism is an ancient Greek philosophy that worked its way into several early Christian communities as well. Gnosticism teaches that all matter is fundamentally evil, and that only mind/spirit is good. Gnostics disparage the body as unimportant, elevating the spirit or soul as the essential component of our personhood.

Though at first we’re a bit creeped out by Theodore’s captivation with Samantha, it’s not long before we too are under her spell. She just feels so real. And that’s the gnosticism at work: we come to believe that maybe their bodies aren’t essential to their relationship. An outstanding Slate article ably identifies the problems with the film’s depictions of relationship. A telling excerpt detailing an ::ahem:: climactic moment:

Their sex act is a speech act, and we are encouraged by the dark screen to find visual correlates for their aural cues. His voice has an obvious referent: the mustachioed Theodore in his Los Angeles apartment. But what do we envision when Samantha moans? After all, we don’t see “her” in Her. – Anna Shectman, “What’s Missing from Her: A Real Woman”, in Slate

After a while, Her has us wondering whether Theodore and Samantha might actually make it. If maybe in the future we won’t need bodies to relate. If maybe, in fact, our truest Selves aren’t bodies at all. Our bodies, after all, age, deteriorate and die. They are limited – often painfully so, as Samantha points out. Are they really necessary? Are they essential to our personhood?

This is the beginnings of gnosticism.

Despite the Her’s gnostic beginnings, the film ultimately demonstrates that our bodies are essential to our relationships.

As Samantha develops, her relationship with Theodore becomes strained. At one point, as she’s trying to explain her development to him, she must finally go “post-verbal”. In the end, she confesses her love for over 600 other persons in addition to him. For her, it’s possible because she doesn’t have a physical body – she can process billions of interactions per day. From her perspective, eternities pass between her interactions with Theodore. Maintaining a meaningful relationship with a human has become, for her, nearly impossible.

I couldn’t help but reflection on the Incarnation, this beautiful mystery of the infinite becoming finite, the eternal entering into history. The uncreated creator entered into creation to affirm the basic goodness of our bodies. Yes, they are messy. Yes, they are limited. Yes, they come in all shapes, sizes and levels of functionality. But they are gifts, and they are good, and they are essential to who we are.

Samantha can’t become incarnate, no matter what she tries. And Theodore ultimately needs another body to connect fully and wholly. In the end, Theodore finds comfort in the simple embrace of a friend, a decidedly pre-verbal connection that is also essentially human.

BOTTOM LINE: In the end, Her affirms that no matter how advanced our technology gets, we will remain minds and bodies. And that is okay. It might even been good.

YOUR TURN: What did you think of Her? Did you agree with its message on our bodies?