DOCTOR STRANGE represents the fourteenth Marvel Studios film and the third in Phase Three. It’s wonderful – as fast-paced and funny as any Marvel film to date (with the possible exception of Guardians of the Galaxy). The major drawbacks are that it is yet another origin story (which was wise – none of the three people with whom I saw the film knew anything about Doctor Strange) and yet another cardboard villain (they are seriously not giving us much hope for Thanos).

While it’s getting harder and harder for stand-alone Marvel films to compete with the team-ups, it’s safe to say that if you like the other Marvel films, you’re going to love Doctor Strange. It’s visually stunning and so much fun, you won’t even notice it’s a complete retread of Iron Man (arrogant, wise-cracking jerk gets hurt, saved by a wise, old stranger and learns to use his powers for good. With a goatee.). Or if you do notice.

Thematically is where Doctor Strange really shines. Read more (including lots of spoilers) after the jump.

Dr. Stephen Strange is a brilliant but arrogant neurosurgeon who is too busy making a name for himself to care about the little people – specifically the individual lives he can save by working in an ER. In an early scene, we literally watch him refuse case after case (including one James Rhodes, injured in CIVIL WAR) because it doesn’t benefit him.

The inevitability of Death, embodied in the intractable march of Time, overshadows Doctor Strange.

Kaecilius seeks to become immortal, and so makes a deal with Dormammu – essentially Marvel’s version of Satan. Dormammu inhabits the Dark Universe and seeks to subsume the whole multiverse into his person. Kaecilius repeatedly fantasizes about becoming one with the One.

Strange’s teacher, the Ancient One*, prolongs her life by drawing power from Dormammu. Though she repeatedly chides Strange for fearing failure rather than loving life, we learn she too has compromised her principles for the sake of immortality. 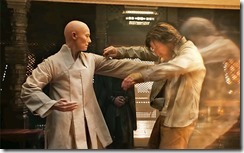 In its critique of Materialism, Doctor Strange suggests that only by embracing death can life truly flourish. 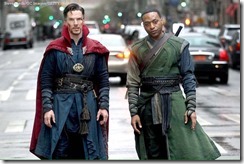 Just before she dies, the Ancient One observes this explicitly. As she reflects on the necessity of embracing Death, she warns Strange that his fellow pupil, Mordo (who, spoiler alert, becomes Baron Mordo), is too rigid. When Mordo learns the Ancient One has broken her own rules, he cannot abide her perceived betrayal. Because he cannot embrace the death of his beliefs he embarks on a quest to rid the world of sorcerers (if that post-credits scene is any sort of teaser).

But it’s not until Doctor Strange is lying face-down on the streets of Hong Kong, having witnessed the horrifying loss of life Kaecilius has inflicted on the city, that he understands what it means to love life enough to fight.

His first showdown with Kaecilius results in Strange killing one of Kaecilius’ disciples. Horrified at having broken his Hippocratic Oath, he steadfastly refuses to kill. When Mordo pushes him on this, Strange insists that Mordo “lacks imagination.”

On the streets of Hong Kong, Strange demonstrates what he means. He flies into the Dark Universe to confront Dormammu. He uses the Eye of Agamotto (which we learn is the Time infinity stone) to create a temporal loop, essentially resetting itself every time Dormammu kills him.

Atonement asks what Jesus accomplished on the Cross, and the Christus Victor model states that on the Cross, Jesus defeated the forces of Evil by dying.

How does one win by dying? Strange shows us how. He limits Dormammu – the demon cannot escape the loop, cannot attack the people of Earth. Strange then directs all of Dormammu’s rage and violence on himself. Dormammu can kill Strange as many times as he wants but is powerless to do anything else. Eventually, the demon’s rage is exhausted and turns to desperation, at which point he is under the Doctor’s power.

“No. But I can lose. Again and again.” – Doctor Strange

This is how theologians talk about the Cross. On the Cross, Jesus swallowed up the power of Evil, taking upon himself such that it exhausts itself upon him. Humanity is thereby freed – this is what we mean when we say that Jesus paid our ransom with his own blood. He bought us out of Death by his own suffering.

Strange’s journey into the Dark Universe is essentially Christ’s harrowing of Hell.

Such powerful theological themes should be no surprise to anyone who’s a fan of the film’s director, Scott Derrickson. Derrickson is an openly Christian filmmaker whose faith is often overlooked because he chooses to make primarily horror films.

In the end, the once selfish Strange gives his own life up again and again. He defeats Evil without striking a single killing blow, but instead giving up his own life to turn evil back on itself.

BOTTOM LINE: The thematic underpinnings of DOCTOR STRANGE save it from being a fun but forgettable retread of the Marvel formula.

YOUR TURN: What did you think of DOCTOR STRANGE?

* Tilda Swenton was incredibly good in this role, but I am still sad the character wasn’t Asian. That said, if the Ancient One had been Asian (like in the comics), then the “White Westerner goes to the mystical East to learn magic” trope would’ve been even more obvious. Given Doctor Strange’s awkwardly dated origin story, maybe the studio did the best they could.