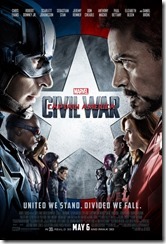 Captain America: Civil War is the thirteenth film from MARVEL studios, and I’d be shocked if it doesn’t prove to be at least the second most successful film yet. It’s certainly one of Marvel’s best films yet – I’d personally rank it third (behind Avengers and Winter Soldier – let the debates begin!).

While Civil War features the largest roster of heroes yet, it is start-to-finish a Captain America film. The film feels much more like the follow-up to Winter Soldier than Age of Ultron, though both film inform the conflict of Civil War.

The Russo brothers – who previously directed Winter Soldier – continue to prove themselves supremely capable of managing a film sprawling in both plot and cast. So if you’re on the fence about seeing it, go. It’s great.

The majority of the film turns on the conflict between Captain America and Iron Man. The nations of the world are uncomfortable with the Avengers acting as a sovereign police force. The Sokovia Accords – named after the nation Ultron destroyed in Avengers II – are endorsed by 117 nations and require UN oversight for the Avengers. Tony sees this as inevitable. Steve sees it as unacceptable. The signing is attacked by Bucky Barnes – except it’s not. It’s (not-quite) Baron Zemo, seeking revenge for his family dying in – you guessed it, Sokovia. In the attack, the king of Wakanda dies, and his son, T’Challa, dons the mantle of the Black Panther to get revenge.

The gulf deepens. Steve is convinced Bucky is innocent. Tony believes he needs to be brought in regardless. The heroes choose sides and call in reinforcements. Easily the best scene in the film is the showdown at the airport. We see Marvel’s take on Spider-man for the first time and it. is. glorious. He’s funny and looks fantastic. The other bright spot is the giant surprise Scott Lang a.k.a. Giant Man gives us.

The fight is pitch-perfect. Every hero plays a part. Every hero is highlighted. The stakes are clear and powerful.

Unfortunately, it’s not long after this the film falls apart. All the heroes are either locked up or sent home (or hospitalized). Steve and Bucky head to Siberia to stop Zemo. Tony figures out – surprise, surprise! – Steve was right, and follows them, while T’Challa follows him. Steve, Tony and Bucky make up and play nice until Zemo reveals his master plan: to lure the three of them to Siberia so he could show Tony video evidence that the Winter Soldier killed his parents.

This is the moment several pieces of the film that had been sticking out like sore thumbs. It’s also the precise moment when Tony goes off the rails. Why did we see the Winter Soldier kill those people twice? Why did Tony open with a monologue about regretting his parents died? None of it made sense until now. And how does Tony react? Not with reason. Even when Zemo tells Tony his plan was to make them fight, Tony doesn’t out-monologue the villain like he did in Avengers. Even though he knows Bucky was brain-washed.

At this point, Civil War devolves into a plot nearly as dumb as Batman v Superman.

Remember all that thematic work that went into two carefully constructed, believable ideologically-opposed sides? They’re gone. After tacitly agreeing with Steve that the Sokovia Accords aren’t a good solution, Tony refuses to see reason. He is blinded by rage – I guess he never let go of his parents’ deaths? Compared to the carefully established stakes of the first two-thirds of the film, this final showdown just feels poorly considered. It feels as though we needed to figure out a reason to have everyone fight one more time.

This third act is supposed to be a commentary on vengeance, but the film hasn’t earned it. T’Challa has been motivated by revenge the whole time, and it’s never considered bad (because everyone else was trying to kill Bucky too). And when he not only refuses to kill Zemo, but keeps him from killing himself, the audience shrugs and says, “Okay, I guess.” Tony’s quest for vengeance destroys the Avengers. Except he’s been on that quest for… 5 minutes? And it’s not what drove the Avengers apart – and they’re already back together when he goes crazy. The “Tony’s sad about his parents” stuff was the only part of a very complex film that felt out of place, and the emotional notes simply didn’t land well at all.

The biggest problem with Civil War is that it did not change the MCU status quo.

Zemo gloats that his plan succeeded. But in the end, Steve apologizes. Tony forgives him. And we’re assured everyone’s still on the same side. We met several new characters, but that’s it. No one died. Before the film opened, the heroes were united and tensions ran high with the government. At the film’s close, the heroes are united and tensions are high with the government. We have a while to wait before we know how this plays out – Infinity Wars doesn’t come out for a while yet. We can only hope that once a few contracts expire, the MCU can actually begin to evolve.

We need the movie Civil War starts out as much more than the film it becomes.

A warning that as we fight each other our enemies laugh with glee could not be more timely heading into this elections season. Of course the answer Civil War gives us – that no one should hold us accountable, that body counts are inevitable so just feel bad and it’s OK – are not exactly what we need either. But at least the themes mattered to us.

By the end, we just had a movie about another superhero feeling sad that his mom died. And Tony Stark has always been better as the Batman’s reflection than his shadow. And did we really need that on Mother’s Day weekend?

Your Turn: What did you think of Civil War?