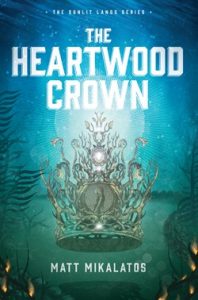 My second book was — believe it or not — weirder than my first, Imaginary Jesus. It dove deeper into nerd culture, Christianity, and the nature of broken humanity, as it dealt with what it means when you are trying to follow Jesus but still wrestling with being a flawed human being. And of course it was all using the metaphor of MONSTERS! 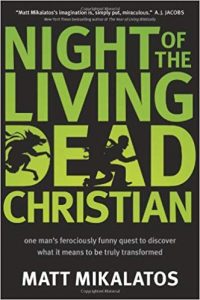 Night of the Living Dead Christian is the story of Luther, a werewolf on the run, whose inner beast has driven him dangerously close to losing everything that matters. Desperate to conquer his dark side, Luther joins forces with Matt to find someone who can help. Yet their time is running out. A powerful and mysterious man is on their trail, determined to kill the wolf at all costs . . .

By turns hilarious and heartbreaking, Night of the Living Dead Christian is a spiritual allegory that boldly explores the monstrous underpinnings of our nature and tackles head-on the question of how we can ever hope to become truly transformed.

I’ve loved monsters  since I was a kid, so playing with the metaphorical constructs of the monstrous while making lots of jokes was pure fun. The zombies are “philosophical”… trying to convert people to their point of view. I love the evil megachurch pastor Dr. Bokor and his gigantic study Bible and his singing zombies. But my favorite scene by far takes place near the climax when our werewolf friend faces a massive betrayal and has to confront a werewolf hunter in a small community church. And a couple of the other characters are (very very loosely) based on friends of mine: Dr. Culbetron and the Hibbs 3000.

I try to challenge myself in every book I write. NLDC is, in many way, the spiritual successor to Imaginary Jesus… it’s a comedy/theology novel and I’m a key character in it. But Luther the werewolf is the center of the book. One of the new things I tried in the book was little first person monologues from the point of view of our werewolf. He has strong feelings that aren’t in line with Christian ways of thinking, and I love the contrast his monologues (which are deadly serious and philosophical) bring to the book. Luther in general is someone I love, and his journey to the final page is so key… I knew the last sentence before I wrote the first, and in fact it was the first thing I wrote!

2. This is the only one of my books to be translated into Portuguese! I still get the occasional fan mail in Portuguese, which is fun. Thank you, Google Translate, for letting me write back!

3. That’s me on the cover, running away from the werewolf! It has a fun “Scooby Doo” feel to it that I love!

4. I made a one-of-a-kind “illustrated edition” for my acquisitions editor, Sarah Atkinson, that was hand drawn in a copy of the book. Many of the illustrations were terrible but it made me laugh a lot.

5. When people tell me that they have read and enjoyed this book, I immediately want to hug them. It’s so uniquely “for me” that if they liked this book I will love them forever.

6. The werewolf hunter in this book first appeared in my ill-fated vampire screenplay THE LONGEST NIGHT about a community of people trying to survive winter in Alaska while bloodthirsty monsters tried to eat them. Years later there was a comic book and movie based on the same (independently arrived at) idea!

This one’s a little bit of a cheat because we didn’t use the original blurb, but here it is anyway:

“Somewhere between Twilight, The Walking Dead & C.S. Lewis is Matt Mikalatos’ inventive sci-fi gospel drama, Night of the Living Dead Christian. Zombies, werewolves, vampires, mad scientists, blood, carnage, crossbows, and….Jesus? It’s all there in Mikalatos endlessly creative, energetic story about how God’s grace can transform every last monstrous one of us. Can werewolves and zombies teach us about Jesus? Before you laugh at that question, read Matt Mikalatos’ wildly creative, surprisingly insightful book.”

It’s tricky to write about monsters and make it resonate as a symbol or metaphor without devolving into pure allegory. You have to babysit the imagery to make sure that it doesn’t wander off into places that don’t make sense. Keeping the emotional weight of the monstrous nature in place was something that took some work… probably one of my favorite scenes is when a neighbor reveals her history as a vampire and lays out how that happened to her. It stands on its own as a meaningful, emotional, story, or as a monster story, and as a metaphor for abusive relationships. Putting all that in one place takes some work!

THE HEARTWOOD CROWN has some similar tightropes as it deals with questions of forgiveness, mercy, generational injustice and trauma, but does it all in a magical fantasy realm. It would be easy (and tempting) to make a “stand in” fantasy “race” to try to say something about the real world instead of building a complex historical and moral framework for the fantasy world that resonates with ours without being a stand in for it.

As for Night of the Living Dead Christian, you can read the first couple of chapters here!

Also, here is young and dark-haired me talking about the book:

Coming Next: The Sword of Six Worlds!