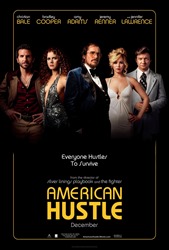 David O. Russell’s American Hustle and Martin Scorsese’s The Wolf of Wall Street both explore the people who thrive by living in the cracks of the American Dream.

American Hustle dramatizes the Abscam scandal of the late-1970s. After warning us that “Some of this actually happened”, the film opens on a barely-recognizable Christian Bale carefully constructing what will later be described as as “rather elaborate” comb-over. Bale plays small-time conman Irving Rosenfeld who’s been scooped up – along with his partner Sydney (Amy Adams) by FBI agent Richie DiMaso (Bradley Cooper). But rather than arresting them, DiMaso has forced them to run cons for him, entrapping various political officials in an explicit bid to build DiMaso’s career.

American Hustle is a film about everyone lying to everyone else. The film’s tagline claims,

Everyone hustles to survive. 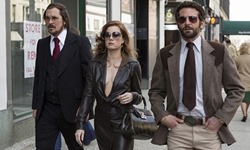 In other words: if you want to “make it” today, you must always working to get one up on the people around you. Irving and Sydney make a comfortable living doing it, stealing money from average people. They justify themselves (to themselves) by observing these marks are doing illegal stuff anyway. Their cons lead them right into the hands of the FBI.

DiMaso’s whole quest is to climb past those above him, to make a name for himself. He abuses his power by exploiting Irving and Sydney (much as they exploited their marks), and strong-arming his captain (Louis C.K.). As the Abscam operation grow bigger and bigger, DiMaso can’t quit, and his ambition ultimately spells his doom: finally, the operation is big enough that his superiors snatch it away from him and he’s left anonymous and alone.

The only people who truly suffer in American Hustle are those who were actually using their power to do good – most notably the primary mark, Mayor Carmine Polito (Jeremy Renner). 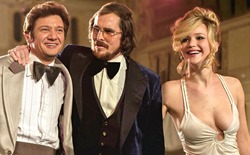 Presented as a popular, well-loved and well-meaning politician, Polito is the antithesis of the stereotypical politician today: he loves his family and they love him. He loves his city and wants genuinely to rebuild it. Every bribe he takes (or gives) is for the express purpose of greasing the political wheels to help the people he serves. (So too the congress persons and senators swept up in Abscam: they may or may not be dirty. All we know is they were arrested for expediting a citizenship process that was explicitly meant to welcome a foreign investor to save Polito’s city.)

American Hustle presents a cynical picture of success in America: there will always be people who prize personal success over the good of the people. And our systems is filled with cracks ripe for exploitation by those people. The game is dangerous, and those who are trying to do the right thing almost never prosper. It’s safer to keep your ambitions small, your head down, and hustle just enough to get by.

While American Hustle’s message rings true, it doesn’t have to be the final word in power and prosperity. 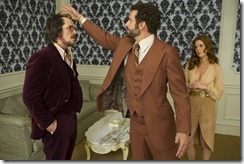 The vision of humanity American Hustle presents is ugly to say the least. No one is free to be their real self. From Irving’s comb-over to Sydney’s fake British accent to DiMaso’s lies about his income and relationship status, everyone is presenting a false picture of who they are to everyone else. The fundamental human desire to be truly known is lost in the constant struggle to be more, drown in the sea of ambition.

When truth becomes known – when Sydney reveals her true voice to DiMaso, when Irvine confesses to Polito, relationships crumble and those who want to be know and loved the most – Sydney and Irvine – find themselves alone again.

The only glimmer of hope comes at the end, where Irvine and Sydney have given up the hustle and settled in together. They have enough, but not too much. And they’ve found meaning in being known by each other, not in trying to get ahead.

Bottom Line: American Hustle is a beautiful film packed with must-see performances. It’s also a depressing picture of power we’d do well to take as a prophetic warning.

YOUR TURN: What did you think of American Hustle? Do you agree with the film’s cynicism?