My first fantasy novel for young adults, “The Crescent Stone,” releases this August. It’s the first book in the Sunlit Lands trilogy, and tells the story of two teens, Madeline and Jason, who are catapulted (not literally) into a magical world where they must battle the forces of evil and their own preferences and desires to try to do the right thing. It’s about friendship, and impossible situations, and dealing with pain, suffering and injustice as teenagers. Also: it is funny. I didn’t include that below, but if you don’t laugh out loud while reading this book, I will host you in my own home for a dinner of stuffed tauntaun.

I’ve loved Star Wars since I was a kid. Here are five ways Star Wars shaped The Crescent Stone!

Yeah, there might be planets and blasters and spaceships in Star Wars, but there are also knights, swords, princesses, and magic. There’s sound in space and the planets are all about an hour away from one another. The “science” in Star Wars never gets much beyond “caution: solid light swords will cut your hands off.”

And of course I loved it from the first moment I saw it.

Sure, other traditional fantasies like Tolkien and Lewis and others came along and influenced me, but like it or not, Star Wars was the first fantasy story to really capture my imagination (like a lot of people my age!).

When I realized I had a shot at writing an epic fantasy, I was over the moon (That’s no moon!) with excitement. I wanted to build a world with big stakes and epic moments of good vs. evil. Masked bad guys! Horrific armies! Courageous heroes! Of course there had to be a magic sword, and evil bad guys and uhhhhh unicorns and, um, desert warriors and giant birds and a siege and knights and a palace and oh, just you wait. It’s so fun. I can’t wait to talk about the actual details with you.

Trilogies are an ancient form of storytelling, going back at least to Greece in 450 BCE (the Oresteia is, I think, the oldest complete trilogy we have). Now, I didn’t know Star Wars was a trilogy when I first saw A New Hope at the drive-in. But now I *expect* epic adventures to be trilogies: Lord of the Rings, Indiana Jones, Batman, Spider-Man, Superman, every-other-man, Terminator, Back to the Future, etc. etc. etc.

And believe me, I love the trilogy form.

In the Crescent Stone, the main characters (Madeline and Jason) are facing a series of enormous problems. Madeline has a terminal lung disease. Jason has experienced a tragedy of such magnitude that he has made an oath never to tell a lie again. On top of that, they find themselves in a fantasy world working for a magical race of beings called the Elenil, who appear to be all light and goodness and righteousness. They’re fighting a horrible magical race called the Scim, who are all disgusting darkness and evil. Pretty quickly they discover that their role is going to be more than fighting monsters: they’re going to have to get to the root of the evil and injustice in the fantasy world to have a chance of saving the day. And while it doesn’t end on a cliffhanger, the story ends with plenty of space for the next novel (THE HEARTWOOD CROWN, get excited) coming next year.

3. Teenagers can save the world

Luke and Leia were 19 in A New Hope. Han Solo, on the other hand, was barely in his twenties (29). Vader was the ripe old age of 42 and the evil emperor was an octogenarian (82). Poor Chewbacca was probably shaking his head all the time at these little babies, because he had just celebrated his 200th birthday that year. And let’s not even get started on Jabba the Hutt. Here’s a chart with the ages of many of the Star Wars characters.

When the Crescent Stone starts the main characters are high schoolers. Madeline Oliver is seventeen. Jason Wu is also seventeen! In fact, Darius, Madeline’s ex-boyfriend is also right around this age. They’re thrown into a world where the controlling powers are often hundreds of years old, and the adults aren’t doing much to change it. Teenagers are going to save the world. They did it in Star Wars, they’re going to do it in the Sunlit Lands. 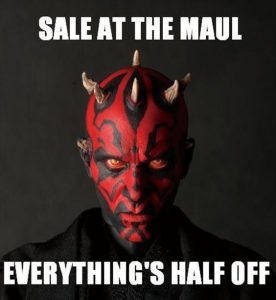 4. The levels of sex and violence are, overall, pretty tame.

There was a recent rumor going around that there would be a rated R Star Wars movie, which I am 100% against. I think it’s against the spirit of the Star Wars universe. I hate this idea a lot. Sure, the occasional limb gets bloodlessly lopped off, but mostly Star Wars keeps it tame in the violence department (especially the original trilogy).

And, yes, there is some weird sibling attraction going on for poor Luke and Leia but they figure it out without… I mean, I can’t even finish this sentence without getting more descriptive than Star Wars. But yeah, there’s no scene where Han Solo is hanging out with Ben Kenobi and asking him if it’s difficult to be a solitary hermit and not to be getting any sex. I mean, Anakin’s mom never even had sex.

There’s a romance in The Crescent Stone, but I think you’ll see it’s quite a bit different than what you may expect. There’s a really sweet, loving bond between Madeline and Darius… but she broke up with him because of her illness. They still love each other and are committed to each other, but Madeline feels like it’s not fair to him to ask that he stay in relationship with her.

And yes, there is some “fantasy violence.” People die. And also: there is at least one instance of limb lopping.

5. It was made for young people.

Star Wars is an “all ages” film. Teenagers, adults, everyone could watch it. I was FOUR YEARS OLD when I saw the first movie. And I loved it. People complain sometimes about Jar Jar or BB-8 or ewoks or whatever, but the plain truth is those things exist because these movies (most of them…) were made with the intention that kids could watch and enjoy them.

George Lucas has said more than once that “Star Wars is for twelve year olds.”

He has also said that the core themes of the Star Wars movies are: “Friendships, honestly, trust, doing the right thing, living on the right side and avoiding the dark side. Those are the things it was meant to do.”

And for me, it did. So many of my childhood friendships were shaped by our shared love of Star Wars, and we knew what it looked like to be loyal to one another, and to do the right thing as a group of friends.

The Crescent Stone is about friendship and doing the right thing, too. Jason is loyal to Madeline and their relationship is full of affection, kindness, and sacrifice. A central debate of the book is how to do what is right when there are enormous personal and societal consequences. 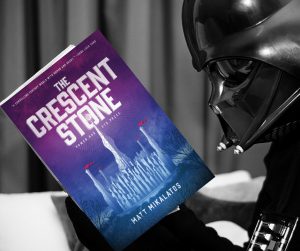 When I read The Crescent Stone, I recapture that feeling I had when watching Star Wars as a kid. I hope you will, too!

Preorder now at the merchants below or anywhere books are sold!