I collected sports cards like crazy when I was a kid. I was six years old when I remember opening my first pack of cards, a crinkly wrapper with a green border that said “1984 Topps Major League Baseball the Real one!” on the front. Other text promised me 15 picture cards and 1 stick of bubble gum. I got a Pittsburgh Pirates player named Jim Morrison and smiled, not realizing there was a more famous Jim Morrison.

My mom and aunt would drive me to card shops and flea markets and drugstores to buy cards or stickers for a quarter a pack. An old Polish man named Mr. Dewey ran a corner store in town. He had wild eyebrows and smelled like baby powder and sausage, but he was very kind. He would only hand over my packs once I successfully counted them out in Polish.

I’ve often wondered how my interests and life would have been different if my first experience into collecting had been a comic book. As it turned out, Marvel Comics eventually produced a set of comic book character trading cards in 1990.

The cards featured amazing artwork of famous, and not so famous, characters. I took them in car rides and to church. During more than one sermon I studied the card backs which included real names, profiles, fighting statistics (Silver Surfer had the best winning percentage), plus where and when they first appeared in the Marvel universe. There were even a few “Rookies” like Ghost Rider and Guardians of the Galaxy.

One of my favorite card shops was in Erie, Pennsylvania, and they sold comics as well. That summer, I got my heart set on owning an issue of Daredevil where DD and The Punisher faced off against each other. It sold for $25, a whopping sum for a 12 year old kid with no money. But I made a down payment during my annual summer vacation week in town and dutifully sent five dollars at a time in subsequent weeks until the book was mine, sealed and delivered to my front door. I didn’t look at any baseball cards that night.

Every collector has exciting memories like that, and when you’re buying not just an item but a story, even an entire universe, the power is immense. The memories are grand.

For as much as I loved sports stars, I never drew pictures of them. Oh, I wrote stories about sports in my head, of which I was of course the hero, but the visual form of comics was the only one that enticed me to try my hand at art for some reason.

This red and yellow guy was my first one. I painstakingly free-hand copied the image from some source material lost to me now. I have no idea why I wanted to draw him or why I thought I even could. During a recent trip home to Pittsburgh, I found this picture in a box in my mom’s attic. I couldn’t figure out who this character was, so I asked my friend Matt, who is a super comic geek.

Matt recognized him right away. “That’s Nova. His real name is Richard Rider.”

Matt fell in love with superheroes as a kid too. I believe that like me, his favorite was Superman, best played in the movies by Christopher Reeve. Unlike me, he read tons of comics. He knows as much about superheroes and villains as I do about baseball, football, and hockey players.

He is such a fan of the terrific superhero characters he grew up loving that he just released a new novel to pay homage to them. It’s called CAPEVILLE: The Death of the Black Vulture and is a terrific story. It’s got artwork in it too, way better than anything I could ever do.

Our friend M. S. Corley—who also did the art for this site—drew every single character created by Matt in the Capeville universe. I can’t believe how talented these guys are.

It’s really because of Capeville that I’ve been remembering how much I enjoyed discovering these kinds of characters as a kid and becoming more enchanted by story. I never would have remembered Nova if it wasn’t for that drawing. I still don’t know hardly anything about him other than he’s one of the good guys. I always rooted for the good guys duh.

After Nova, I took a crack at freehand copying two more characters, Moon Knight and Black Panther, from the cards in my set. 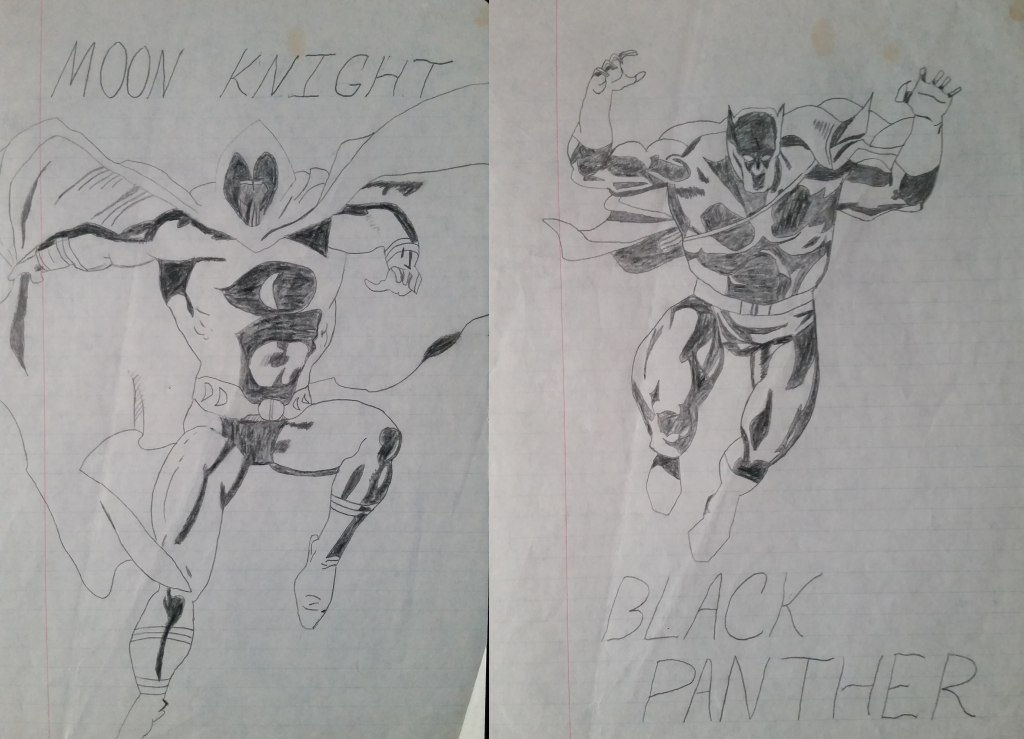 Moon Knight’s real name is Marc Spector. The Black Panther is T’Challa. The real names matter. They’re part of the hook for kids who get to know a big secret like that, especially when adults always privately whisper all their own important things to each other. Superheroes also wrestle with their identity, and anyone growing up knows what that’s like.

My family is devoid of artistic ability, so I have no idea why this is a thing I did. Something about the impossibility of superheroes must have rubbed off and made me believe in myself. Even today, I look at these pictures and can’t believe I drew them. It’s like I had this random superpower of my own when I was 12 that allowed me to draw something recognizable for once.

So I understand why dark and gloomy modern movie versions of superheroes bother a lot of fans. Some of us want to remember the magic of meeting heroes again like we did when we were kids, which is why it’s great that Matt wrote Capeville, complete with well-developed characters who wrestle with their identities too.

Capeville is a great story. I hope you read it for yourself and then grab a few copies to hand out to some young readers you know. As you do, think of Old Man Dewey counting in Polish, and the powerful collision of story and art in our memories.